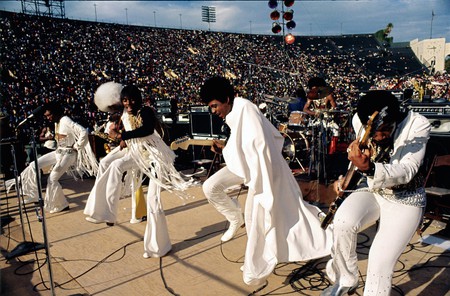 It’s no secret that Hollywood puts forth quite a bit of fictional storytelling. Lesser known, however, is the extensive documentary coverage the same streets have inspired. Few cities have the diversity, vastness and creative energy of this one, which is the reason many great stories originate from here. With a wealth of fantastic documentaries that chronicle all aspects of Los Angeles, here are a few that showcase the fashion, music and politics of our City of Angels.

Once dubbed the, ‘Best Documentary About Los Angeles You’ve Never Seen,’ this film, composed of almost three hours worth of film reels, remained relatively obscure for over a decade until its Netflix debut last year. The documentary goes to great lengths to explore the role of Los Angeles in American film. Written by Thom Andersen and masterfully narrated by Encke King, this film sympathizes with Angelenos’ experiences with a town whose economy revolves around ‘the industry.’ Just don’t call it L.A.

Sure, the punk movement might have started in the UK but it was here in Los Angeles that laid the foundation for a ton of diverse sub-genres with bands like Germs, Circle Jerks, X, and Black Flag. Directed by Penelope Spheeris, this important film, which is the first in a three-part musical narrative of the city through the last decades of the 20th century, follows the punk scene and features a lot of footage of Germs’ Darby Crash shortly before his suicide. After years of obscurity, the film, whose screenings used to put the LAPD on high-alert, is now available as a boxset on DVD.

If watching an inspiring story about a group of triumphing underdogs is your thing, you might want to skip the tired Hollywood plots and opt for this film, instead. Widely considered one of the most inspiring social justice documentaries, this film chronicles the journey of María Pineda, Maura Colorado, and Guadalupe ‘Lupe’ Hernandez, alongside other immigrant workers, as they fight against retail giant Forever 21 for workers’ rights violations. The website for the film encourages groups to host screenings. Audiences also have the option to request a valuable resource for discussions about the rights of immigrants working in the US in the form of a ‘Toolkit’ which features video modules and a 100-page guide.

If you find yourself dreaming of Old Hollywood or enjoyed the Central Library’s latest exhibition on food, then you’ll love this film, a story about Chasen’s, the West Hollywood restaurant as famous as its patrons. Today, you’re likely to spot stars like Rihanna at Giorgio Baldi or Lindsey Lohan at Chateau Marmont, but for decades, Chasen’s was the spot for actors, musicians and figureheads to gather, smoke, drink and eat. Unfortunately, after shuttering in 1995, all that remains of the cultural landmark is a chili station, and this fantastic documentary. You don’t have to take my word for it, here’s a video of the late Roger Ebert reviewing the film when it was released in 1997. Also, if you want to finish your night off with video clips of long-gone LA restaurants paired with sexy saxophone, YouTube, again, has you covered.

For ten years, Good Life was a cafe in Los Angeles. Like many cafes, they featured local talents on open mic night. Unlike many cafes, the performers at this spot ended up defining hip-hop poetry. However, in 1997, the open mics stopped. The cafe closed shortly after. If you’re interested in what remains of the scene, Project Blowed, a collective that formed from the original movement is still around and regularly tweets about upcoming events and music releases. At least this documentary remains as evidence of the LA’s role in the emergence of alternative hip-hop.

Besides the spike in escapees from the zoo in the late 1990s, Los Angeles has quite a diverse native animal population. Downtown, there are pigeons. In the Hills, there are coyotes. And South Central? Well, unfortunately, there are stray dogs. This documentary, in association with Animal Planet, helped shed some light on what most people don’t get to see: the intimate lives of these homeless dogs. Because this documentary might make you shed some tears, here’s a link where you can find information on spaying, neutering or fostering pets.

Coachella has nothing on Wattstax, a legendary music festival in 1972 that brought out some of the best performers and important figureheads of all time, including Richard Pryor, Isaac Hayes and Jesse Jackson. The monumental occasion was created by Stax Records to commemorate the neighborhood’s role in the 1965 Riots. Even if you’re not a music fan, the quintessential 70s fashion alone deserves a viewing. The tall afros, bangles, velvet pants and fur coats will have you cooing in nostalgia for one of the best decades in music.

Many people are familiar with the popular 2005 movie ‘Lords of Dogtown.’ However, the documentary that sparked that film is a bit more special. The film, directed by Zephyr skater Stacy Peralta, follows 1970s Santa Monica and Venice (‘Dogtown’) teenagers as they hang out, skate empty pools, and surf. Many of the teenagers featured in the film, such as Jay Adams, Tony Alva and Peggy Oki, went on to become professional skateboarders.

Los Angeles is known in popular culture as a healthy city, one with a hippie past and great music. This bizarre yet stylish film combines all of that in its portrayal of the Source Family, a communal-living cult led by health food mogul Father Vod. Since its release, this film has been screened at numerous festivals. You can still catch a screening by visiting the events page of the film’s website.

Although there’s a lot to love about Los Angeles, the city does have its faults. Probably one of the biggest social issues currently is the rapidly growing homeless population in Skid Row, a neighborhood in Downtown. In the past two years, the displaced population has already risen 12%. The problem is bad enough that Mayor Eric Garcetti has developed a plan that will put $100 million to work for solutions.

There’s a lot of conflict concerning the method of helping the displaced people who live on the streets of Skid Row. Recently, a judge has made it more difficult for the city to take homeless people’s belongings, like tents and blankets. This documentary, which features homeless college graduates and Olympic medalists, helps break down stereotypes and public perception of this community.