10 Films That Represent The American Dream 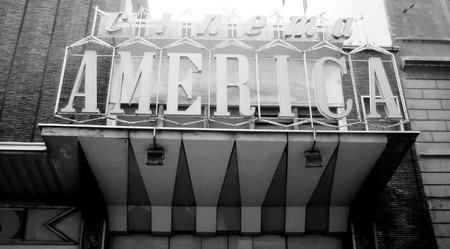 The American Dream tells you that you can achieve success through hard work and determination. What follows is a selection of movies that shows it’s not always as simple as that.

An argument over the remote transports polar-opposite twins David and Jennifer into the black-and-white TV show Pleasantville. It portrays an idyllic but heavily sanitized version of 1950s America. As the teens try to get back home, they inevitably change the landscape of the town and accidentally start a sexual revolution in the teens and housewives, which turns the characters into Technicolor. The TV show reflects how most Americans envision the Dream with white picket fences, 2.4 children, and a car in every garage. It also shows how the Dream is not as universal as imagined. It demonstrates, for example, the lack of women’s liberation and the fear of anything that upsets the status quo.

This is the sort-of-true story of how a student changed the face of the internet from his dorm room. The story behind Facebook isn’t short on drama either; it included betraying a friend and being sued for intellectual property theft. Though the real-life people portrayed dispute parts of the film, David Fincher’s filmstill shows the hard work ethos of one of the richest men in the world. Mark Zuckerberg had an idea that would change the future, and he worked on it non-stop. He even dropped out of Harvard to pursue it.

This lovable 1980s children’s film features a plucky mouse called Fievel who moves his family from Russia to America for a better life. They’ve heard rumors that the streets are paved with cheese and there are no cats in America, but when they arrive, they realize the rumors are false. The cheese-paved streets are a reference to the streets of gold that convinced many 19th and 20th century immigrants that America was a place to make one’s fortune without the obstacles present in their home countries. The American Dream is sold to many immigrants who realize that America is not the paradise they thought it was. Some of them may even face more oppression than they originally did.

The Pursuit of Happyness

This is the true story of Christopher Gardner, a man who invests heavily in an expensive medical device that doesn’t offer a great benefit over its cheaper competitors. As a result, he finds it hard to sell them and his life hits a downward spiral. His wife leaves, he loses his house, and he is forced to live on the street with his son. Then he takes a job as a stockbroker, but before he can receive any money, he has to pass six months of training and sell the medical devices. This movie shows that even when it seems like you’re living the American Dream, it can all fall away due to a twist of fate and the deck can become stacked against you. Still, Gardner succeeds against the odds.

Jay Gatsby, the hero of F. Scott Fitzgerald’s great novel, who worked hard to become wealthy in the hopes of winning the heart of Daisy Buchanan. He throws lavish parties to impress her but doesn’t attend them himself. The 2013 film (like its two predecessors) shows the competing forces at work in the American Dream. Gatsby has loved the idea of Daisy for years and believes that once he has her he’ll be happy, but this thinking is flawed. Practical Daisy refuses to leave her unhappy marriage to a wealthy man for a chance at true love with Gatsby.

Jefferson Smith believes wholeheartedly in the democratic ideal of the USA. He is the head of the Boy Rangers when appointed to the US Senate by State Governor Hopper. In Washington, he reunites with his childhood hero, Senator Joseph Paine, who is running for President. Smith learns about the seedy underbelly of political corruption and attempts to reform it, but political rivals implicate him in a scandal to discredit him. The film relays that despite the democratic principles that make up the American Dream, the political system is as fallible as any other is. That being said, we shouldn’t give up trying to reform and improve it, but we should work harder to make it a fair and just society.

Forrest Gump is the story of a man with a below-average IQ who accomplishes great things, far surpassing the expectations society has for him. He gets into college on a football scholarship, he saves his platoon from an ambush in Vietnam, and runs across the USA for three and a half years. Eventually, he reunites with his childhood sweetheart, Jenny, who has developed a mystery illness; she introduces him to their son, Forrest Jr., and the couple marries shortly after. It’s a beautiful tale which focuses on the idea that through bravery, determination, and love, you can achieve happiness regardless of the challenges you face.

A family of misfits travel cross-country so that daughter Olive can take part in a beauty pageant. Olive doesn’t care about winning; she just wants to enjoy herself. The father, a motivational speaker, believes wholeheartedly in the American Dream. He teaches the meritocratic nature of America, despite the fact that it hasn’t worked for him yet. Unlike the traditional American Dream films, this one does not focus on success after a life of struggles but teaches you to accept failure as a possible result. The big lesson is that in order to enjoy life, you need to focus less on ambition.

Charles Foster Kane is a self-made man who is fabulously wealthy in his old age, but he is not happy. His Xanadu estate, which should provide him with happiness, becomes the prison of his own creation, and his material possessions isolate him further. He recalls a time when he was truly happy, as a small child with his beloved sled Rosebud. The movie is a reminder that, on their own, success and wealth do not provide happiness.

A documentary on the 1985-86 meatpacking workers’ strike in Austin, Minnesota. Hormel Foods had cut their employees’ hourly wage by over $2 to $8.25 and reduced benefits by 30 per cent despite posting a net profit of $30 million. Despite the efforts of a strike consultant and negotiator, Hormel hired replacement workers, which led to conflicts in the local community. The strikers’ resolve fades over the ensuing months as they suffer financial problems and familial rifts. The movie focuses on the emotions and hardships behind the strike. It shows that too often you have to balance financial stability with your ideals.