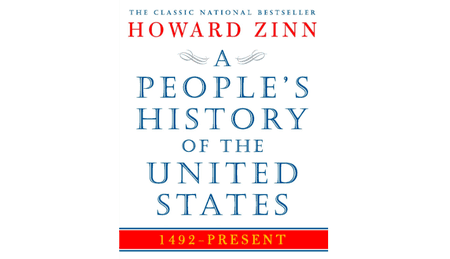 A member of Arkansas’s House of Representatives wants Howard Zinn’s A People History of the United States removed from the shelves of public and charter schools.

“History is told by the victors” goes the oft-cited Winston Churchill quote. This was conventional truth until, at least, the historian Howard Zinn popularized revisionist history with his seminal book A People History of the United States. Now one Arkansas lawmaker would like to see its bound pages pull from the shelves of schools in his state.

According to the Arkansas Times who broke the news late last week, Rep. Kim Hendren has introduced HB1834, officially entitled:

“AN ACT TO PROHIBIT A PUBLIC SCHOOL DISTRICT OR OPEN-ENROLLMENT PUBLIC CHARTER SCHOOL FROM INCLUDING IN ITS CURRICULUM OR COURSE MATERIALS FOR A PROGRAM OF STUDY BOOKS OR ANY OTHER MATERIAL AUTHORED BY OR CONCERNING HOWARD ZINN; AND FOR OTHER PURPOSES.”

In an interview with the libertarian periodical Reason, Hendren defended his act by saying that “a number of his constituents have raised concerns about some of the approaches that Howard Zinn has taken to history in the books he’s written.” His concern, the article went on, “is primarily with providing equal time for opposing political viewpoints to avoid ‘indoctrination’ of one point of view, and that his aim with this bill is not necessarily seeing his bill passed in its current form, but rather, to spark a conversation and debate.”

Hendren has run into controversy before, when in during a bid for a U.S. Senate seat in 2009, he referred to Sen. Charles Schumer (D-N.Y.) as “that Jew.” Hendren retracted and apologized for the statement, but as Reason points out, not before making a few more provocative statements: “I don’t use a Teleprompter, and occasionally I put my foot in my mouth…I was attempting to explain that unlike Sen. Schumer, I believe in traditional values, like we used to see on ‘The Andy Griffith Show.'” Hendren eventually lost his bid for the seat.

This is the latest action in a long and bitter fight between conservative lawmakers and advanced placement educators with the Republican National Committee arguing that the latter, according to Rawstory, are teaching a “radically revisionist view of American history that emphasizes negative aspects of our nation’s history.” A People’s History was banned from Tuscon, Arizona schools in 2012.

First published in a print run of 4,000 copies in 1980, A People’s History of the United States has since become an underground multi-million best-selling work and a cultural touchstone, being name dropped by Matt Damon in Good Will Hunting and making an appearance on The Simpsons. It is considered the masterwork of Zinn, a lauded historian and self-described “democratic socialist” who died in 2010 at the age of 87.

For its obituary of Zinn, the New York Times framed the impact of his magnum opus: “To describe it as a revisionist account is to risk understatement. A conventional historical account held no allure; he concentrated on what he saw as the genocidal depredations of Christopher Columbus, the blood lust of Theodore Roosevelt and the racial failings of Abraham Lincoln. He also shined an insistent light on the revolutionary struggles of impoverished farmers, feminists, laborers and resisters of slavery and war. Such stories are more often recounted in textbooks today; they were not at the time.”

A children’s edition of A People’s History was published in 2007.

According to the Independent, more than 250 Arkansas teachers have signed up for the Zinn Education Project—an initiative to have Zinn’s work taught in primary and secondary schools—to take advantage of the history lessons it offers. The Project has also pledged to send a free copy of A People’s History to anyone who requests one and has tweeted a photo of high school students from Batesville, the county seat for Hendren’s district, protesting his bill.