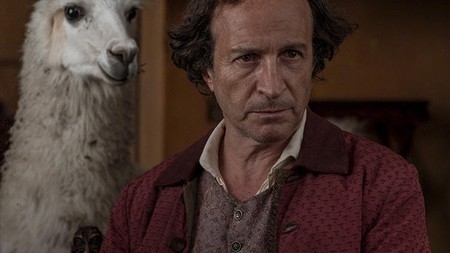 If you’ve ever been trapped interminably in a job in a hostile environment and been desperate to leave it, you’ll identify with Don Diego de Zama (Daniel Giménez Cacho).

The tormented protagonist of Zama, which the great Argentinian writer-director Lucetia Martel based on the 1956 existential novel by her compatriot Antonio de Benedetto, is a corregidor (judicial official) in the 18th-century Spanish colony of Paraguay. Because Zama is not himself Spanish but South American-born, his requests for a transfer to a city that isn’t a primitive backwater, like his current berth, are constantly ignored. 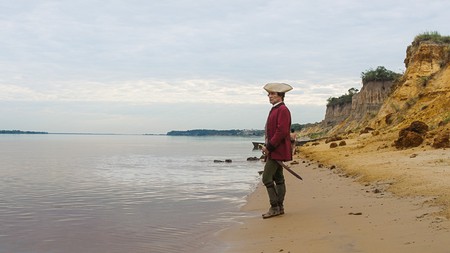 There comes a moment in the film when, having brawled with his subordinate Prieto (Juan Minujin), Zama is told by the governor that Prieto will be deported to the city of his choice, Lerma, to which Zama himself wants to be posted. As Zama learns this dreadful news, a punishing musical note wells up on the soundtrack and a nosy lama wanders into the indoors shot, emphasizing the absurdity of Zama’s predicament. The music mostly interpolated by Martel consists of anachronistic Hawaiian guitar tunes. They pop up like the snatches of zither in The Third Man (1949) but are more languid and mocking.

Worse is in store for Zama. Humiliation upon humiliation piles upon him as payback for his colonialist hubris and unspecified crimes as a judge. As she showed in her last movie, The Headless Woman (2008), Martel is an elliptical filmmaker whose complexly immersive cinema may exasperate viewers weaned on straightforward narratives. For example, she conveys Zama’s exalted opinions about his work and status by having other characters—such as a merchant friend’s cholera-afflicted little boy—voice them in interior monologues. Since Zama is suspicious and paranoid, the device works. How much of our time do we spend imagining what others think of us or projecting our thoughts onto them?

Parted from his wife for many years because of his posting, Zama exists in a fug of sexual frustration. Early in the film, he is labeled a voyeur by the Indian women who catch him spying on them as they wash their naked bodies on a beach. Pathetic in his needs, he gives unwanted attention to a friend’s teenage daughter after she tells him she was raped by Vicuña Porto, a mythical bogeyman who is seemingly Zama’s alter ego.

The worst of Zama’s sexual failures results from his sweaty pursuit of the Treasury minister’s flirtatious wife, Luciana Piñares de Luenga (Lola Dueñas), who deliberately leads him up the garden path. Calling on Luciana one night, Zama is admitted by her slave and peers through the doorway where the middle-aged coquette is having a post-coital moment with his rival Prieto.

The biggest blow to Zama’s morale comes at the time he is forced to leave his elegant government home for a hovel. The new governor upbraids Zama because his scribe has been writing a book on “company time.” He agrees to send a request to the King of Spain for Zama’s re-posting if Zama will write a report denouncing the scribe. After he’s done this, the governor tells him he’ll write a second letter to the King in “one or two years” because the first will have no effect. The look of resignation on Zama’s face is appalling.

Years pass. Zama next appears with a thick greying beard and a receding hairline. In a desperate hope that he will still attain his goal, he volunteers for a posse intent on apprehending Vicuña Porto, since rumors of his execution (if he, in fact, exists) are unfounded. Hitherto shot in tight, dark tableaux-like frames by Rui Poças—the brilliant Portuguese cinematographer who lensed Miguel Gomes’s Tabu (2012), another masterful critique of colonial malfeasance—Zama explodes in girth and color.

The posse runs adrift in swamps and grasslands where it is harassed by red-daubed natives, and a piratical thug (Matheus Nachtergaele) claiming to be Vicuña demands of Zama that he lead him and his cronies to a hoard of “coconuts full of precious stones.” Martel is making a nod here to the fruitless search for El Dorado in Aguirre, Wrath of God (1972) and perhaps to Treasure Island. The white man’s quest for untold riches in South America is one of the most egregious of imperial follies.

As embodied in the internal exile Zama, Spain’s colonial project is an exercise in futility and dashed dreams. It is perfectly espoused by Daniel Giménez Cacho with his face of craggy nobility and his fatalistic demeanor. If Martel sees Zama as a lepidopterist sees a butterfly pinned to a board—an object of fascination, but not a figure who inspires much sympathy—the journey he leads us on is stupendous.

Zama is screening at IFC Center in Manhattan.