You may have seen photographer Jacqui Kenny’s amazing travel photographs taken on Google Street View, or used the tech to explore the coolest streets in Paris, Canada’s Playground of the Gods or Bangkok’s most Instagrammable views. Now, you can use Street View to take you into space, too.

Starting this week, you can explore the International Space Station (ISS) in street view in Google Maps. Astronauts helped capture 360-degree imagery inside all 15 of the the ISS’s modules, as well as stunning views of Earth floating in the distance.

‘In the six months that I spent on the International Space Station, it was difficult to find the words or take a picture that accurately describes the feeling of being in space,’ wrote astronaut Thomas Pesquet in a blog for Google.

Thanks to zero gravity, it was also a challenge to capture the images. Using DSLR cameras the astronauts already had on board, the crew shot photos and sent the pictures to teams at NASA back on Earth, who stitched them together to create panoramic imagery. 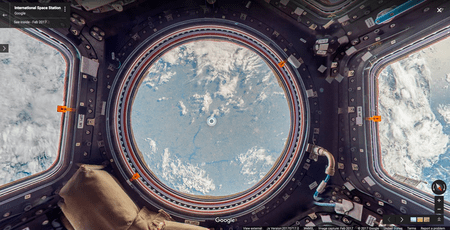 The project aims to help give the public a better idea of what astronauts do in space. ‘The ISS acts as a base for space exploration—possible future missions to the Moon, Mars and asteroids—and gives us a unique perspective on Earth itself,’ explains Pesquet.

‘We can collect data on the Earth’s oceans, atmosphere, and land surface. We can conduct experiments and studies that we wouldn’t be able to do from Earth, like monitoring how the human body reacts to microgravity, solving mysteries of the immune system, studying cyclones in order to alert populations and governments when a storm is approaching, or monitoring marine litter—the rapidly increasing amount of waste found in our oceans.’

It was also a project of firsts. The mission ‘was led by Peggy Whitson who, at age 56, became the oldest woman to fly into space and the first woman in history to command two expeditions,’ said Pesquet.

It was also ‘the first time Street View imagery was captured beyond planet Earth, and the first time annotations—helpful little notes that pop up as you explore the ISS—have been added to the imagery. They provide additional information or fun facts like where we work out to stay physically fit, what kind of food we eat, and where we conduct scientific experiments.’

You can check out the images for yourself here.

Crew Quarter | Google
Give us feedback