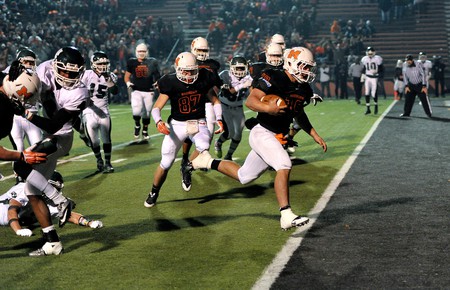 The end of summer evokes a host of emotions for high school students in the United States. Long gone are the lazy days spent at the pool or on the beach working on your tan. Days will soon be filled with textbooks, homework and school.

It isn’t all bad though. The start of the school year brings with it football season. And if you don’t think football is a big deal in America, check out this $70 million high school football stadium being built in Texas.

With that being said, we take a look at the 10 winningest high school football programs in the country.

Valdosta became the first high school program to reach 900 wins with a 38-13 victory against rival Lowndes to start the 2016 season. Valdosta is the second football program at any level to reach the milestone, joining the University of Michigan (915 wins). The Cats have won six national championships, 23 state championships and 41 regional championships. In 2008, Valdosta was named TitleTown USA by ESPN.

Winning is something Highlands is used to. Since beginning its football program in 1915, the Bluebirds have had winning records in 91 of their 101 seasons, with eight being losing seasons and two at .500 marks. Highlands, which has won 23 state titles, hasn’t had a losing season in 60 years.

This Louisville school went 15-0 in 2015 en route to its eighth state championship. Former NFL running back Michael Bush played quarterback his senior season at Male after playing wide receiver, running back, defensive back and safety earlier in his career.

Based in Massillon, Washington has been recognized as the AP National Champions nine times (the most by any school in the nation). Washington and rival Canton McKinley have played 126 times and it is the only high school game in the country to feature odds in Las Vegas. The rivalry was also the subject of the 2001 documentary film Go Tigers!

Mayfield has won 12 state titles, including the past four (2012-15). The Cardinals’ rivalry with Paducah Tilghman began in 1911 and is the second-oldest rivalry in the state. Mayfield is the third-winningest program in Kentucky, trailing Highlands (877) and Male (860).

Not to be confused with Mt. Carmel in Chicago (726 wins), Mount Carmel is the winningest program in Pennsylvania. The Red Tornadoes won five state titles between 1994-2002.

Second in the state behind Mount Carmel, Easton has been making up ground in the nation’s all-time wins rankings. The Red Rovers were ninth in 2013 and eighth in 2014. Easton plays rival Phillipsburg (New Jersey) for the ‘Forks of Delaware’ Trophy each Thanksgiving. The teams have played 109 times with the first meeting in 1894. 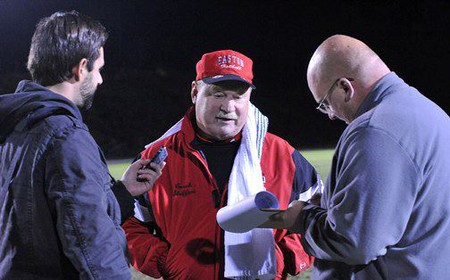 Second in Ohio to rival Washington, this Canton program has won 12 state championships and two national titles. McKinley has had nine undefeated seasons and 14 seasons with 10 or more wins. The Bulldogs have had 98 winning seasons (.500 record or better) in 122 seasons of the program’s existence.

Hampton has won 18 state titles and two national titles. The Crabbers appeared in 10 consecutive state title games in the 1980s, winning eight of them. Buffalo Bills quarterback Tyrod Taylor was a three-sport star at Hampton; he also ran track and played basketball. The Crabbers went 34-4 in Taylor’s four years under center.

The winningest team in West Virginia, Parkersburg has won 16 state championships, most recently in 2007. The Big Reds went 14-0 in 1999 and 2006, and had undefeated seasons in seven other seasons since the program began in 1900.