Why the U.S. Men’s Gymnastics Team Might Compete Shirtless 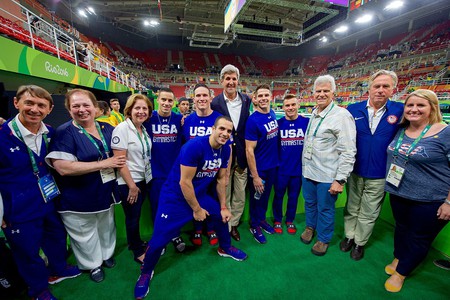 Despite the jaw-dropping feats of athletic prowess it offers, men’s gymnastics has never reached the popularity of classic American sports like football, and baseball, not to mention women’s gymnastics.

Chalk it up to the lack of men’s gymnastics teams outside of high school or the Olympics, or the lack of flashbulb moments on the men’s side compared to the high drama of moments like Kerri Strug nailing the landing of her vault event at the Atlanta Olympics, despite an injured ankle.

At the Olympics, the U.S. women’s team has brought home a medal from every summer games since 1992, earning the gold medal at the London games in 2012 and Rio in 2016 and elevating gymnasts such as Strug and Simone Biles to household name stature.

But the men have a strategy that they think might attract more viewers and raise their sport’s profile: going shirtless.

The idea originated in Rio de Janeiro, months before the 2016 Summer Olympics in that city. Danell Leyva, a member of the U.S. men’s team, posted an Instagram photo of his shirtless team on the beach, and the post quickly went viral.

The photo’s popularity got the team to thinking—would showing a bit more skin attract more viewers to the sport?

“Maybe [we’ll] compete with our shirts off,” team superstar Sam Mikulak told the Wall Street Journal before the games began. “People make fun of us for wearing tights. But if they saw how yoked we are, maybe that would make a difference.”

Despite losing out on the all-around team medals to Japan (gold), Russia (silver), and China (bronze), the U.S. men’s team did manage to make headlines, due to one teammate removing his shirt, naturally.

In the middle of his parallel bar routine, U.S. gymnast Danell Leyva paused and looked at the crowd, pumping his arms to get the crowd cheering. As they did, Leyva whipped off his shirt, and the crowd went wild.

Leyva finished his routine shirtless. He would go on to win the silver medal for that routine, and for another routine that he performed on the horizontal bars, which is the highest a U.S. gymnast would place in that year’s Olympics.

No word yet on what the U.S. men’s gymnastics team is planning for 2020, but if 2016 is any indication, get ready for a few shirtless selfies in Tokyo, and shirtless gymnasts on the pommel horse, still rings, floor, vault, horizontal bars, and, of course, the parallel bars once more.