Why is Domino’s Repairing Streets Across the U.S.? 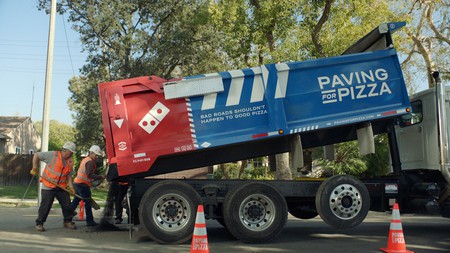 Citizens in several cities may have already noticed their potholes filled in and marked with the pizza chain’s logo.

Domino’s is putting their dough into more than just pizza, with a new initiative that provides grants to cities across the country to fix their potholes and cracked roads. Why? In a humanitarian effort to get pizzas to your door in one piece (or one pie).

Their drivers cover an estimated 12 million miles a week delivering pizzas in the U.S, and according to the pizza chain, potholes, bumps, and cracks in the road can ruin pizzas by causing toppings to slide off and cheese to stick to the top of the box (the horror!). So, to help protect their pizzas, they cooked up a clever marketing campaign to provide grants for road repairs to up to 20 towns and cities across the U.S.

Customers can nominate their city for consideration on the Paving For Pizza website. As part of a pilot program, Domino’s provided $5,000 grants for road repair projects in four cities: Burbank, California; Athens, Georgia; Bartonville, Texas and Milford, Delaware. Among the stipulations is that the paved over potholes include a spray-chalk of the Domino’s logo and slogan: “Oh yes we did.” 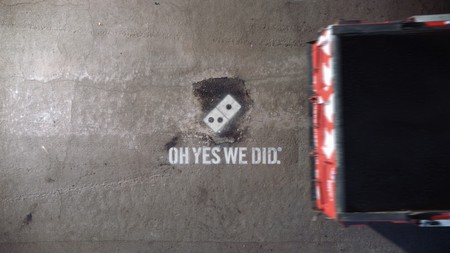 “We can’t stand by and let your cheese slide to one side, your toppings get un-topped or your boxes get flipped,” Domino’s states on the initiative’s Paving For Pizza website. “So we’re helping to pave towns across the country to save your good pizza from these bad roads.”

Nationwide, potholes and cracked roads present a huge problem. Damage from potholes costs drivers an estimated $3 billion a year, according to a study from the AAA auto club. A report by the American Society of Civil Engineers, meanwhile, ranked roads as the number one infrastructure problem facing the US. They estimated that $2 trillion is needed over the next 10 years to get the country’s roads back into shape.

While the cheesy advertising campaign does provide a public service, many took to social media to question what it says about the state of infrastructure in the U.S. that a pizza chain is stepping in to fix potholes.

Dominos is paying their own money to pave over potholes in cities because cities aren’t taking responsibility and this is the greatest PR ever and honesty so sad that a pizza chain is doing the governments job pic.twitter.com/seXY0Ovoq5

Funding our healthcare through GoFundMe, our journalism through Patreon, and road repairs through Dominos. Everything's perfectly on track, America 🇺🇸🇺🇸🇺🇸https://t.co/xreFmWHJ5I

But in an op-ed in the Washington Post, the city manager of Milford, Eric Norenberg, said that for him, taking the funding from Domino’s was a no-brainer.

“Relative to our budget for street repairs, $5,000 is not a small amount of money,” he wrote. “In two weeks, [our maintenance team] fixed more than 40 potholes of different sizes—about 20 to 25% of the potholes that appeared after the winter. The chalk was gone after the first rain.”

This isn’t Domino’s first attention-gaining program for an innovative approach to their delivery system. They also tested out self-driving delivery cars in Michigan, and added in the ability to deliver to certain places without an address (ie: the beach).

It’s also not the first time a food chain has fixed potholes in the U.S. In 2009, KFC embarked on a similar marketing campaign to repair roads and potholes, starting with their hometown of Louisville before giving $3,000 grants to four other cities across the country. Other corporations have also provided public services as part of marketing campaigns, such as Charmin’s public restrooms in New York City and Samsung’s electronics charging stations in airports.