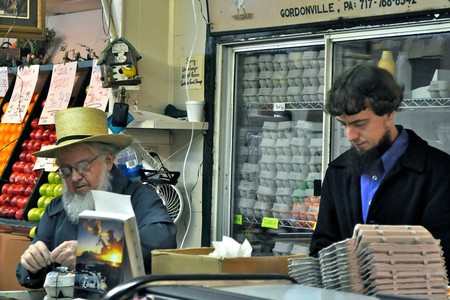 If you’ve ever driven through Amish Country, then you’re familiar with the sight of buggies, blueberry pies by the roadside, and men with long, flowing beards.

But as bountiful as the beards of Amish Country’s men might be, you’d be hard-pressed to find an Amish man with a mustache.

Why the curious inequity between above the lip and below? Multiple factors contribute to the Amish enthusiasm for the beard and hatred for the mustache.

The origin of the curious rule prohibiting mustaches lies in American colonial times.

Up until 1916, British soldiers were required to have mustaches. And when the British occupied the United States in the colonial era, they were relentless bullies of the Amish (and other Mennonites in Europe). No self-respecting Amish man wanted to ape the facial hair of his tormentor, and it became a norm in the community to eschew mustaches. 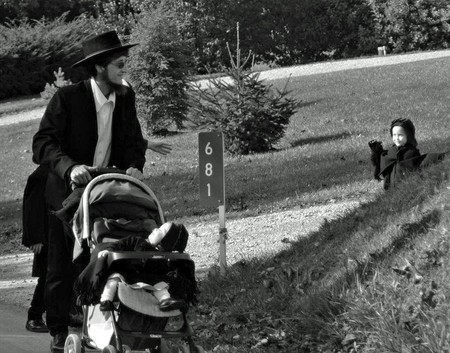 Beyond their own negative experiences with British soldiers, the Amish are pacifists, and they viewed soldiers as a group with skepticism. Thus, when creating rules and codes of dress, it made sense for the Amish to distinguish themselves from the militarily mustached by choosing not to grow them.

So why do the Amish embrace beards as much as they reject mustaches? The answer is twofold.

The most obvious lies in two Bible verses espousing the virtues of a beard: Psalm 133: 1-2 (“How good and pleasant it is when God’s people live together in unity! It is like precious oil poured on the head, running down on the beard!”) and the slightly more prosaic Leviticus 19:27 (“Do not cut the hair at the sides of your head or clip off the edges of your beard”). The Amish interpret verses like this literally, and they view their beards as a sign of their fealty to the word of God.

But the beard also has a more surprising signifier for the Amish: it is one of the only visual cues a stranger can have to clue into the fact that a man is married. The Amish do not wear wedding bands, but when a man gets married, his beard becomes the sign that he is off the market.

Amish men wear their beards with pride, as signifiers of their commitment to their religion, their wives, and their families. Just don’t ask them to match it with even the slightest fuzz on their upper lips.