Which City Has the Best National Football League Fans? 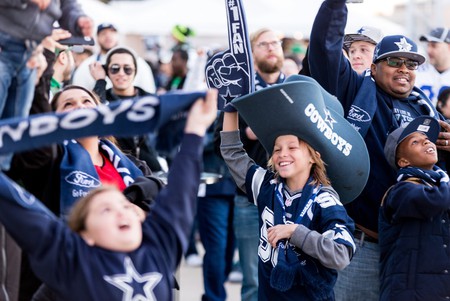 The Dallas Cowboys have the top fanbase in the NFL, according to a recent study | © fitzcrittle / Shutterstock

Which National Football League (NFL) team boasts the best fanbase in the United States? A study by Emory University in Atlanta has the answer.

Not only do NFL teams battle it out on the gridiron on a weekly basis throughout the fall and winter each year, but each team’s respective fanbase is also in a fight. Those clad in their favorite team colors are constantly trying to outdo the opposition, whether it’s gaudier tailgates, more absurd outfits, or louder chanting.

Dr. Michael Lewis of Emory University’s Goizueta Business School has developed statistical models to track the depth of fandom in all 32 NFL markets. Dr. Lewis writes: “The key is that these models are used to determine which city’s fans are more willing to spend or follow their teams after controlling for factors like market size and short-term changes in winning and losing.”

Without further ado, here are the top five best fanbases in the NFL and the bottom five fanbases.

Best fanbases in the NFL

On why the Cowboys are No. 1, Lewis writes: “The Cowboys’ average home attendance usually leads the league, fans are willing to pay high prices, and the team’s Twitter following is exceptional. The Cowboys are America’s team.”

Worst fanbases in the NFL

On the teams with struggling fanbases, Lewis writes: “The good news for these teams [Jags, Chiefs, Titans] is that on-field success is the best way to create brand equity and fan loyalty. The bad news is that it takes a good amount of success to move the needle long-term.”

The Cleveland Browns fanbase is the worst in the NFL, according to a recent study | © Erik Drost / Flickr

How to measure fanbase

Dr. Lewis utilized a trio of measures of fan engagement to come to his conclusions: fan equity, social equity, and road equity.

Fan equity focuses on office revenues or “support via opening the wallet,” so everything from ticket sales to purchasing of memorabilia. Best: Cowboys, 49ers, Patriots. Worst: Rams, Raiders, Jaguars.

Dr. Lewis said the metrics “provide balance” because they are an assessment of willingness to spend, a statistic that isn’t based on home field stadium size, and also based on national appeal.