What Is Handball And How Can The United States Get Better At It? 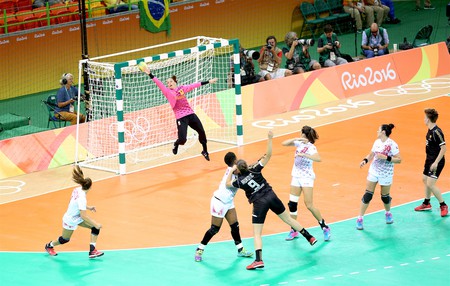 The fast-paced team indoor game looks like a hybrid of all those sports and then some. First played in Scandinavia and Germany at the end of the 19th century, handball is a seven-on-seven sport with six outfield players and one goalie.

The goal? Pass the ball with your hands (hence the name) with the aim of throwing it into your opponent’s net. The team with the most goals after two 30-minute halves wins.

Like every sport, handball has its own unique rules. Goalies are surrounded by a 20-foot zone where no other player is allowed, so attacking players have to score from outside of the zone or while jumping into it — the ball must be released prior to landing in the designated area.

Field players are allowed to touch the ball with any part of their body above the knee (or else a kicked ball is called), while goalies are permitted to use any part of their body to make a save as long as they are in the crease. After possessing the ball, players must dribble — similarly to basketball — or can take up to three steps for up to three seconds at a time without dribbling.

The game, played on a court 131 x 66 feet with a goal at each end, is quick and physical; contact, to an extent, is allowed. Referees award two-minute suspensions — where the penalized team plays down a player — for serious or repeated rules violations, unsportsmanlike conduct or illegal substitution. If a singular player is penalized with three two-minute suspensions in the same game, he/she is disqualified from participating in the remainder of the game.

The International Amateur Handball Federation was created in 1928 in occasion of the Olympics in Amsterdam. The first Field Handball World Championships was played in Germany in 1938, following its appearance at the 1936 Games in Berlin.

Handball was no longer played at the Olympics after Berlin, except as a demonstration sport in 1952 in Helsinki. Indoor handball made its debut at the 1972 Olympics in Munich; Yugoslavia won the first-ever gold medal in a competition that featured 16 men’s teams.

Women’s handball was introduced at the 1976 Olympics in Montreal; the Soviet Union won gold in the six-team field. 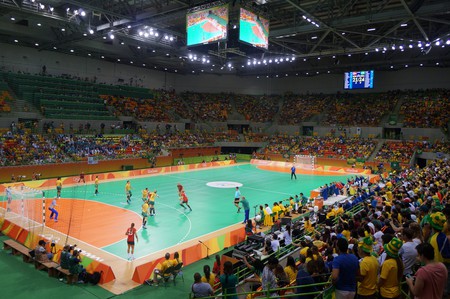 Handball is the only sport at the 2016 Olympics in Rio without U.S. representation.

The U.S. men’s team hasn’t qualified for the last five Olympics. In the 1996 Games in Atlanta, the host nation finished ninth, with its only victory over winless Kuwait. The men’s best finish was sixth (out of six) in 1936 in Berlin.

The women’s team hasn’t faired any better; they also haven’t qualified since the ’96 Games. Their best finish was fifth (out of six) in the 1984 Olympics in Los Angeles.

Bob Djokovich, a 1984 Olympian and vice president of USA Handball, spoke to USA Today about America’s struggles in the sport and what it will take to compete with the rest of the world. Converting athletes from other sports to handball is vital. Specifically, it requires building up a youth system and increasing general interest, but the real appeal is the fact that it can lead to the Olympics. As a sport, handball seems tailor made for American uptake and audiences.

‘It is a tough road, but it is not unsurmountable,’ Djokovich said. ‘There are a bunch of steps to be taken. … There is huge athleticism, constant action, a lot of scoring. We need to pick up momentum — and then we can start dreaming of the Olympics.’