What Happens to the Losing Super Bowl Team's Apparel 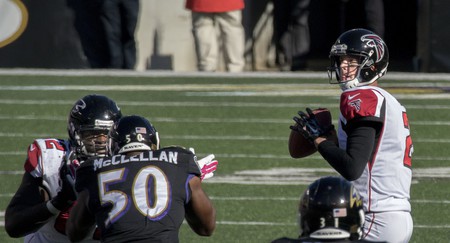 Matt Ryan, pictured above against the Baltimore Ravens, and the Atlanta Falcons lost Super Bowl LI to the New England Patriots | © Flickr/Keith Allison

The scene is the same. The clock reads 0:00. The final whistle blows. Some players jubilantly celebrate. Others fall to the ground in agonizing defeat. Confetti floats down from the rafters. There are tears of joy. Tears of disappointment. People are hugging in celebration. Some in reassurance. Amidst all the chaos, there are people running around from player to player and coach to coach handing out T-shirts and hats that proudly read “Super Bowl Champions”.

Prior to each Super Bowl, the ultimate prize in the National Football League, countless T-shirts, hats, and towels are printed with the respective team names on them to be handed out in a moment’s notice following the conclusion of the game. Yet, while the victorious team is donning the new swag — soon to be purchased by thousands of fans lining up in front of stores early the next morning — there remain boxes and boxes of untouched apparel made for the losing team should they have won.

The merchandise doesn’t go on sale. It doesn’t get tossed in the trash. Instead, it is donated to the less fortunate. Since 2015, the NFL has worked with Good360 to distribute the merchandise from losing teams of the NFC Championship, AFC Championship and Super Bowl to those in need around the globe. The NFL worked with World Vision for 19 years before beginning its work with Good360, sending goods to places including El Salvador, Haiti, Zambia, Romania, and Azerbaijan.

Good360, which was recommended to the NFL from its dealings with Nike, distributed approximately 30,000 units (T-shirts, hats, towels) following Super Bowl 50 after the Denver Broncos defeated the Carolina Panthers 24-10, according to Good360 chief marketing officer Shari Rudolph.

So how does it work? According to Rudolph, details about the products available for donation are sent to Good360 a week or so after the Super Bowl. Good360 then notifies its non-profit partners to find out who has a need for that specific type of product. Once products are requested, Good360 ships the units to facilities across the United States, where they are combined with other received products (via Good360 and other sources) to fill a container, which is then shipped overseas and distributed to those in need.

Well, @12s here's what the #BackToBack shirts would have looked like! #Seahawks pic.twitter.com/zUoIxc5HS8

Rudolph said Good360 doesn’t disclose the exact locations the products are distributed but it only distributes to countries that are pre-approved. That list may include countries in Africa, Latin America, Asia, Eastern Europe, and Middle East.

So if you ever visit an impoverished part of the world and see someone wearing an “Atlanta Falcons, Super Bowl LI Champions” T-shirt, you now know why.