The Origins Of The Ice Cream Sundae

It’s been 124 years since the inception of the classic American treat, the ice cream sundae – it has endured through poverty, hard times, and celebratory days. Read on to discover more on how this famous dessert originated in the late 19th century.

During the Depression, one of the few affordable luxuries of the time was the sundae; in the midst of WWII celebrations, sundaes were passed out to celebrate the victory. The ice cream sundae, a symbol of our enduring youth, is ‘authentically American‘ – it evokes childhood nostalgia and is an expression of individuality, a genuinely ‘original’ dessert that allows the eater to choose the toppings. While it can have many variations, the sundae generally consists of multiple scoops of ice cream, chocolate syrup, and is topped with a maraschino cherry. The origins of the ice cream sundae is a debated topic: three different regions in the United States lay claim to its creation, with the biggest rivalry between Two Rivers, Wisconsin and Ithaca, New York.

Ed Berners, the owner of a soda fountain and ice cream parlor in Two Rivers, Wisconsin, claims that he was the first to serve the ice cream sundae. In 1881, his customer George Hallauer asked for ice cream with chocolate syrup on top, which was only used to flavor sodas. Berner tasted the dish and liked it – serving it on Sundays for a nickel; the dish was added to the regular menu after a young girl asked for the dessert during the week, asking if they could ‘pretend it was Sunday.’ The name ‘ice cream sundae’ came about after a glassware salesman placed an order for ‘sundae dishes,’ the canoe-shaped glass bowl in which the sundae was typically served.

The Washington House Hotel Museum has a replica of Ed Berner’s ice cream parlor and a historical marker in the Two Rivers Central Memorial Park marked with Berner’s story (1973). 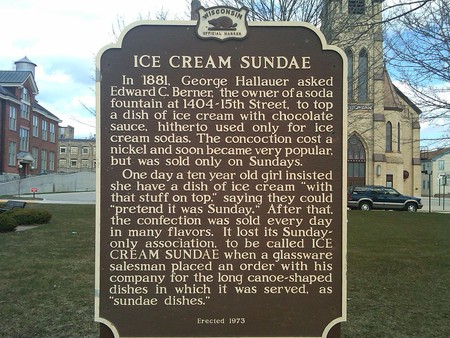 Chester Platt, the owner of the Platt & Colt’s drugstore, also claims to have created the ice cream sundae. On a Sunday afternoon in 1892, Reverend John M. Scott of a local church came to the pharmacy after service for a refreshment. A friend of Reverend Scott, Platt asked his fountain clerk for two bowls of ice cream, adding cherry syrup and a candied cherry before giving it to the Reverend. The two men loved the dish so much that they decided to come up with a name – and so, the ‘Cherry Sunday’ was born, named after the day it was created. 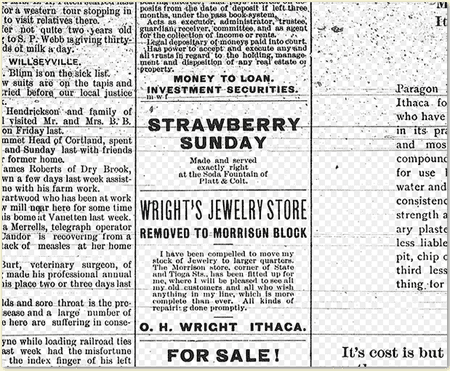 Ithaca is the first city in the United States to have documented evidence of the ice cream sundae. Discovered by two Ithaca high school students, evidence shows an advertisement for Platt’s sundae in the Ithaca Daily Journal of October 5, 1892; original ledgers confirming the name of the clerk working that day; that Platt was indeed selling ice cream in the early 1890s; a letter from the Platt clerk to historian John Brooks describing his account of the ‘Cherry Sunday’; a letter from Platt to a patent attorney on March 23, 1894, detailing the request for a trademark on the sundae.

In 1890, Evanston, Illinois, a very strict religious town, passed a law that prohibited the selling of soda on Sundays – a local soda fountain, Garwoods’ Drugstore, began selling ice cream sodas without the soda on Sundays, leaving just ice cream and the soda syrup. While Evanston doesn’t lay claim to the creation of the sundae, they do claim that the name of the dessert belongs to them.