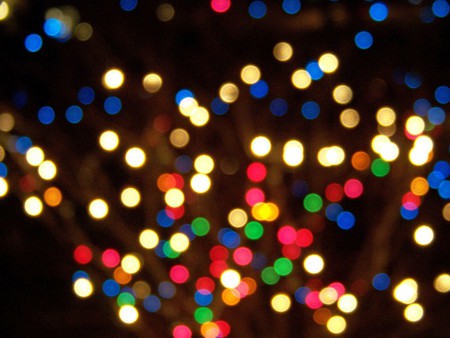 The warm glow of fairy lights; snow-dusted pine trees; glimmering golden ornaments – holiday charm knows no bounds. But the allure of eccentric décor – from pooping logs to creepy crawly Christmas trees – is equally strong, so we present some of the weirdest and most wonderful Christmas decorations around the world.

Locally known as the Caga Tió (“Shit Log”), or more kindly the Tió de Nadal (“Christmas Log”), this Catalan tradition is…unique. Each year, a log is given legs made of twigs, a smiley face, and a cozy red blanket for its holiday debut on December 8th’s Feast of the Immaculate Conception. The log sticks around as seasonal home décor until Christmas, and each night the children of the house feed it dried fruit and nuts. On Christmas Eve, it’s time for the log to poop. The children who cared for Caga Tió all month long strike it with sticks while they recite a traditional song demanding that the log excretes sweets.On Christmas day, they hope to find candy and presents – Caga Tió‘s ‘shit’ – in the fireplace under its blanket. 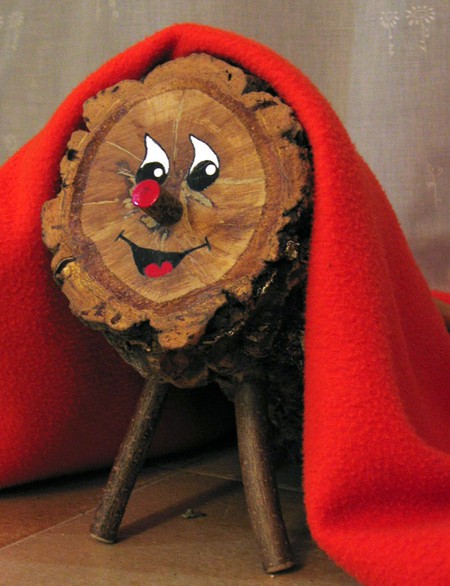 It’s beginning to look a lot like…Halloween? In the Ukraine, Christmas trees are adorned with spiders and cobwebs. Sounds spooky, but these unlikely decorations are actually rooted in a rather heartwarming tradition. An Eastern European folklore tells the tale of a penniless widow who discovered a small pine tree growing through the floor of her hut. She was too poor to decorate the tree for her family, and on Christmas Eve her children tearfully went to bed without holiday cheer. But they awoke to find the tree adorned with intricate cobwebs that turned to silver and gold in the morning sunlight. Overjoyed at this Christmas miracle, the widow and her children lived prosperously ever after. Today, Ukrainians continue this humble Christmas tradition, adorning their trees with fake spiders and cobwebs made from crystals, silver and gold tinsel, glitter, and paper. 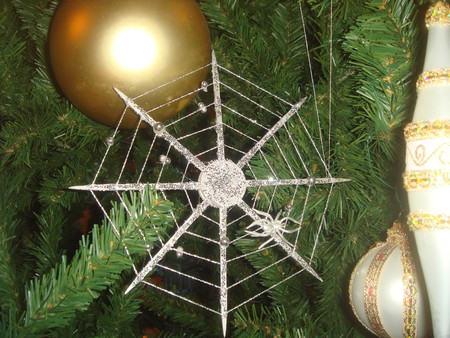 Ukrainian Christmas Tree at the Museum of Science and Industry, 2008 | © Daniel X. O'Neil/Flickr

La Noche de Rábanos (the Night of the Radishes) has been a recognized holiday tradition in the Mexican city of Oaxaca since 1897. Each year on December 23rd, the city held a Christmas market where talented wood carvers would sell their crafts. Noting the popularity of the carvers’ stalls, a group of farmers decided to attract shoppers’ attention by carving intricate figurines out of their produce. This proved to be a wild success, and well over a century later the event attracts over 100 contestants and thousands of visitors who line up for miles to see the large-scale Christmastime displays for themselves. Farmers grow special large radishes designated for carving, and the winner takes home 12,000 pesos. 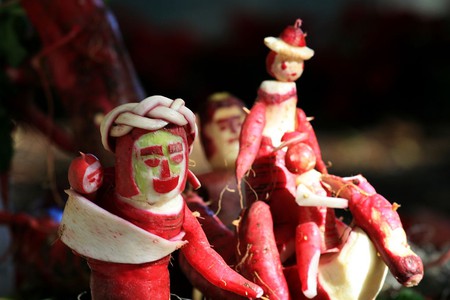 Day of the Night of The Radishes | © drewleavy/WikiCommons

Legend had it that it was an old German tradition to hide a glass pickle ornament in the family Christmas tree, and the first child to find it would get a special treat from Saint Nicholas. The problem with this tale was that few Germans seem to be familiar with the custom. Upon further investigation it was ruled that the Christmas Pickle likely originated in the United States, but no one is definitively sure where, how, or why. One hypothesis supposes that Woolworths department store imported glass decorations from Germany in the 19th century and turned them into Christmas ornaments to increase holiday sales, while another is rooted in the bizarre story of a German-American prisoner of war who nearly starved to death, saved only by the kindness of his prison guard who offered him a pickle. After the American Civil War ended and the soldier returned home, he started the tradition of hiding a glass pickle in the family’s Christmas tree to honor the ‘meal’ that saved his life. 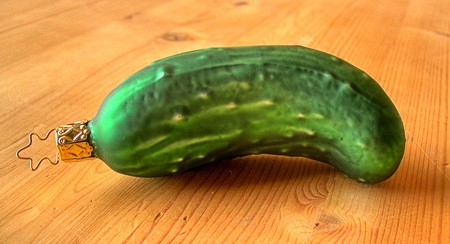 It turns out that the world’s largest “Christmas tree” is actually not a Christmas tree at all; rather, it’s The Netherlands’ tallest radio tower in IJsselstein. Gerbrandy Tower stands at a height of over 1,200 feet, and each holiday season it’s turned into a gigantic ‘tree’ with bright lamps suspended along its cables to resemble string lights. It was so expensive to decorate that the tower was only budgeted to be lit up once every five years, but it became such an iconic sight that it’s now sponsored each Christmas. 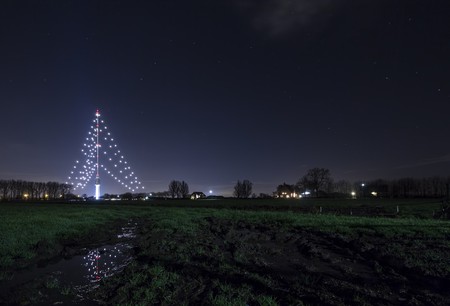 Since the mid-1960s, the Gävlebocken has been an annual Christmas decoration in the Swedish city ofGävle. The large-scale goat effigy was first devised by an advertising consultant who thought the festive figure might promote community cheer. But shortly after the first straw goat was completed, it met an untimely end when it was found mysteriously burned to the ground. Every year since then, the Gävle Goat has been destroyed one way or another – usually via arson. Town officials have long tried to preserve each successive Gävlebocken, but have never quite managed to save it. 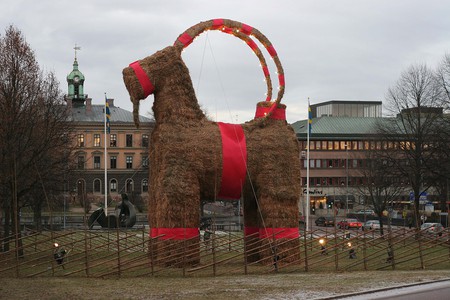 Karavaki (“Little Boat”), also known as “The Christmas Ship” is an old thematic tradition in Greece during the holiday season. Christmas boats are rooted in Greece’s nautical history; when seamen came home after a long time away from their families, their wives would welcome their return by gifting them small decorative ships. These ships became synonymous with the holiday season, as December 6th marks the annual Celebration of Agios Nikolas (Saint Nicholas), who serves as the Patron Saint of Sailors in Greece. Now, warmly-lit Christmas boats are dotted across Greece like Christmas trees, while it’s also tradition for children go caroling from door to door, singing traditional kalanda and holding their own small wooden boats. 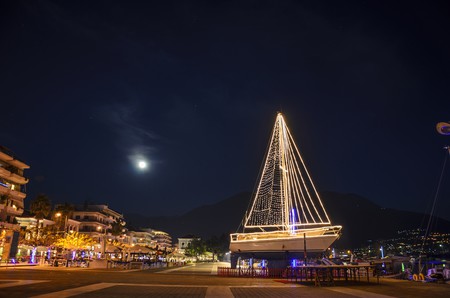 The majority of India’s population is Hindu and Muslim, but Christmas is still a celebratory time for millions of people. Rather than decorating traditional pine trees, Indian Christmases are celebrated by decorating mango or banana trees. It’s also common for home decorations to include mango or banana leaves themselves. In Africa, some choose to decorate banana or oil palm trees with traditional Christmas ornaments to boost the holiday cheer. 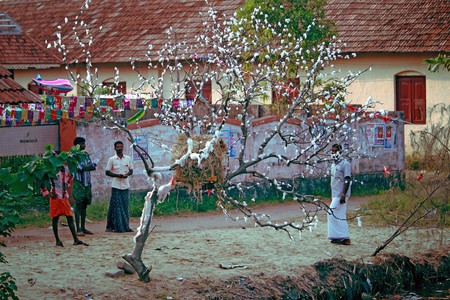 They say everything is bigger in Texas, and San Antonio’s North Star Mall proudly boasts the world’s largest pair of cowboy boots. Standing at a height of over 35 feet, these massive Texan accessories are brightly lit during the holiday season, adding a bit of country pep to the holiday step.