Weird and Wonderful Larger Than Life Objects in the United States 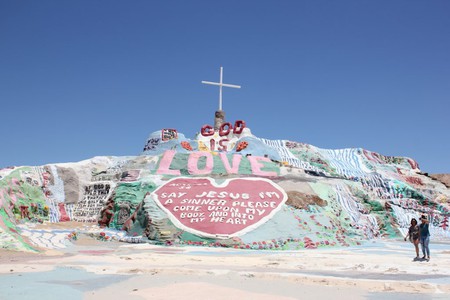 The United States has a reputation of extolling excess. Considering the world’s largest Santa statue in North Pole, Alaska or the 5,000 square-foot house carved from a boulder in Utah’s Canyonlands Country, America’s obsession with size seems more magical than malevolent. From super-sized wonders to the just plain weird, here are 10 larger-than-life objects to see in North America.

It’s easy to believe this Santa can see you when you’re sleeping: at 42-feet high, the Christmas season-inspired statue has an excellent vantage point. Appropriately located in the town of North Pole, Alaska, the world’s largest Santa statue is just one part of holiday lover’s haven,The Santa Claus House. Weighing in at a whopping 900 pounds, this super-sized Saint Nick requires nearly 20 gallons of paint to keep him in tip-top, toy-delivering shape. 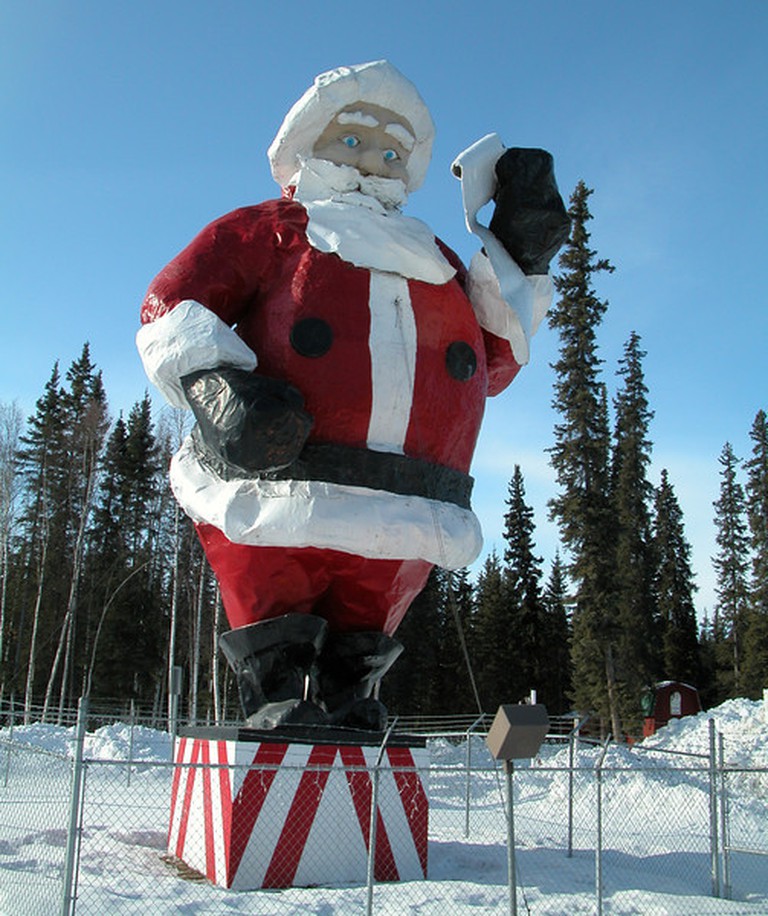 In the mid-1980s, Leonard Knight created a modest monument made of cement and paint, adding a little more to it each day. Three decades later, a 50-foot hill covered in 100,000 gallons of paint known as Salvation Mountain stands guard over a California desert. Although originally intended as a tribute to God, this psychedelic sight and non-profit public artwork fits right in with California’s hippie aesthetic. 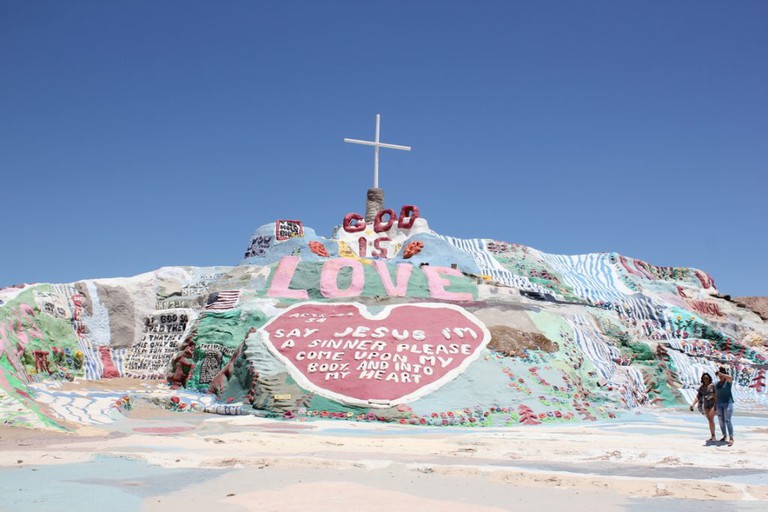 Gaffney, South Carolina’s Peachoid is a 135-foot tall water tower built to resemble a peach. A nod to the state’s identity as the South’s biggest peach producer, the structure features a seven ton, 60-foot long leaf and required 50 gallons of paint in 20 different colors. James and the Giant Peach references have been overshadowed by the Peachoid’s focal role in the hit Netflix series House of Cards as well as by a public debate over the object’s alleged resemblance to a certain piece of human anatomy. 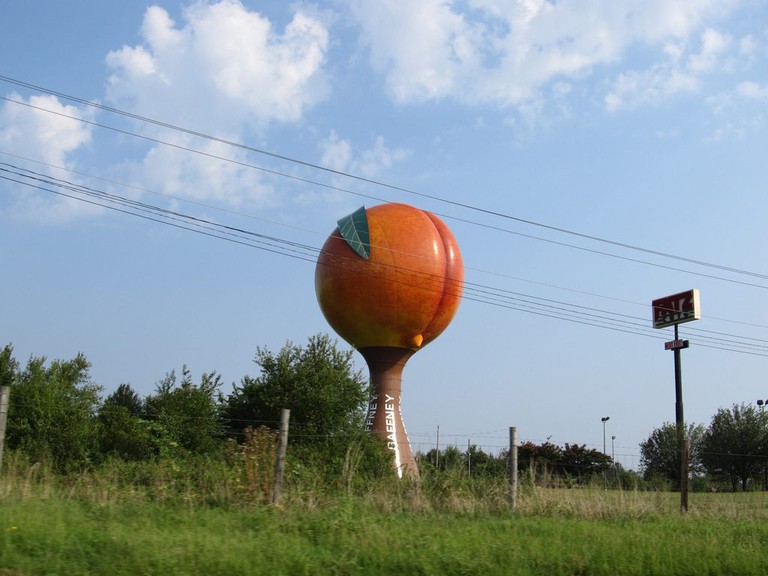 Perhaps the only modern Americans confirmed to actually live under a rock, Albert and Gladys Christensen are the pair behind Hole N” The Rock, a 5,000 square-foot home carved out of a boulder in Utah’s Canyonlands Country. While its creators have since passed away, Hole N” The Rock lives on. Visitors are welcome to tour the house’s 14 rooms complete with a 65-foot chimney and built-in bathtub; a shop featuring vintage tools, memorabilia, and more; and the world’s largest collection of Lyle Nichols artwork. 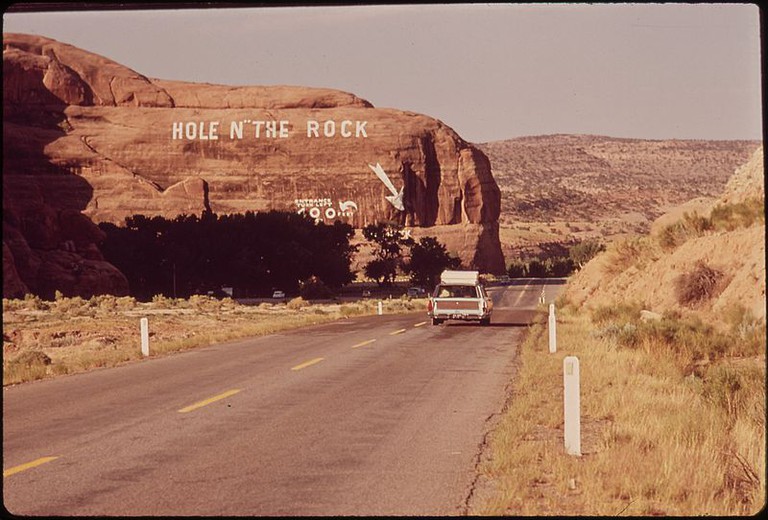 The Largest Burger in the World

At first glance, Clearfield, Pennsylvania’s Denny’s Beer Barrel Pub appears to be an ordinary American restaurant. Here, diners can dig in to loaded salads, chicken wings, or a 10-pound burger featuring 25 slices of cheese and a 17-inch bun. If you can complete the colossal meal in three hours or less, you’ll earn back your $30 and a spot in Denny’s hall of fame.

Driving down Arizona’s I-10, riders are confronted with a number of towering billboards— 247 of them, to be exact— emblazoned with sayings like ‘The Mystery of the Desert,’ ‘The Thing,’ and finally: ‘What is it’? By the time you’ve reached the stretch’s end, you can’t help but want to uncover the mystery of The Thing. Hint: it involves Bigfoot-like footprints and a series of curiosity-crammed sheds.

Lots of Americans believe in the existence of extraterrestrial life. Not many of them would erect a 42-foot tall structure proclaiming itself as a ‘UFO Landing Port’ in a Wisconsin corn field. The port’s creator, Bob Tohak, built his creation with the thought that a UFO landing port might attract visiting extraterrestrials. Equipped with flashing lights and a steel platform durable enough to support a helicopter’s weight, Tohak’s port is ready to receive guests.

In Cold War-era America, Redstone Rockets were used as ballistic missiles by the U.S. government. 50 years later, they’re treated as decor in public parks. Specifically, one park in Warren, New Hampshire, the only North American town with an authentic Redstone Rocket. Here, wooden tables and grassy lawns surround the rocket, allowing visitors to picnic in the shade of a historic spacecraft. 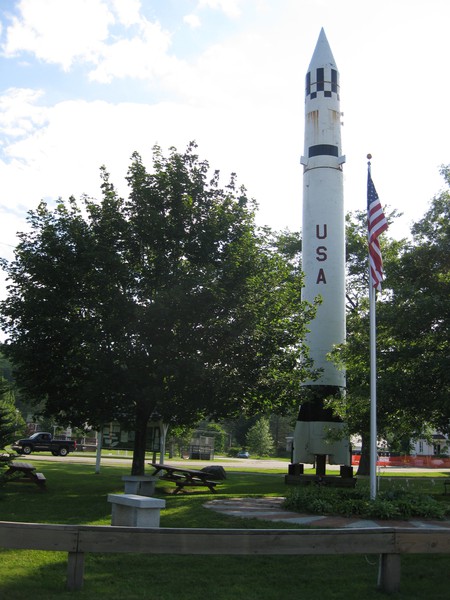 Think a Southern sports bar chain called Hooters featuring buckets of birds and scantily-clad servers is as stereotypically ‘American’ as it gets? Think again. Displayed on the deck of a Hooters outpost in Madeira Beach, Florida, a 1,037 pound chicken wing— the world’s largest— hangs from a fishing hook over barrels of hot sauce.

Weird even by the standards of roadside attractions, this installation of a gorilla holding up a Volkswagen Beetle was created as a promotional statue for a Vermont dealership. Since the statue’s erection in 1987, curiosity-seekers come from all over to pose for a picture in the gorilla’s right hand and admire a real VW Bug held 19-feet above the ground.