We Have Officially Reached Peak Doughnut and These Photos Prove It 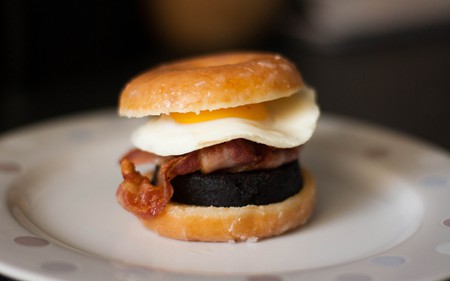 Did the world need Everything Bagel doughnuts? No, it probably did not. But they’re here now.

This is the summer of the doughnut. Put to use in traditional sweet or adventurous savory applications, dressed up or down, highbrow or low, doughnuts are everywhere—surrounding your burger, iced in cutesy designs, replacing your morning bagel. In NYC, they’re absolutely inescapable; with all the new doughnuttery openings in the past year or so, doughnut shops are now nearly as ubiquitous as delis.

Here, in absolutely no particular order, are some of the craziest doughnut-based treats we’ve seen so far this summer. Note that several of these are/were limited edition treats and may not be available any longer.

Okay, this particular food combination—with glazed doughnuts taking the place of hamburger buns—has been around for a while, but we’re seeing a resurgence of places offering it. This example is from Buns Bar in NYC, using doughnuts from Dough.

Doughflowers in bloom! Available now at all of our NYC shops. #doughnutplant

Happy Canada Day! 🍁 Celebrate our origins this July 1 with a selection of Canadian-inspired products, including the Poutine Donut, Maple-Bacon Iced Capp and Maple Timbits. Available this Saturday only at participating Tim Hortons.

IHOP, of all places, just launched this breakfast mash-up treat earlier this week.

Leave it to the Aussies to create a doughnut topped with icing that somehow glows in the dark. It sounds improbable, but Black Star Pastry has done exactly that.

Tried our newest creation yet? The GLOWNUT – glow in the dark doughnuts. Only at our @vividsydney pop-up in Martin Place.

B Sweet, in Los Angeles, has the right idea for enjoying summer.

Come celebrate #NationalIceCreamDay with one (or a few) of our #BSweetHalo hot pressed glazed donut #icecream sandwiches!!! Hot on the outside, cold on the inside and yummy allover! Want MORE ice cream?! Try our version of the classic #Filipino shaved ice treat, #HaloHalo! THIRTEEN yummy ingredients layered and topped with Ube ice cream and ready for you to mix! So cool and refreshing! It’s also the last day to enjoy items from this week’s menu like our #RedBull Cake, #Ube Bread Pudding and Ube Cheesecake! Come party with us! Open till 8pm tonight. Pic: @thefoodiesaur

We want to cuddle and/or adopt these doughnuts, because they’re simply too cute to eat.

Happy Tuesday! 🙊 I’ll be teaching how to make some of these animal donuts in Jakarta later this month 😆✌ Contact @sweettroops_bakingstudio to book your seat! I’ll also be at the Unicorn Festival at @melbournecentral this Friday from 5pm with @rymondtn! 🦄💕 Pop by and say HI 👋

Doughnuts from a Modernist Cuisine master

Wylie Dufresne, one of the chefs who led the molecular gastronomy movement, has closed his avant-garde restaurants and turned his attention to doughnuts, opening Du’s Donuts earlier this year.

We actually got to sample these doughnuts, created by Doughnut Project to kick off Negroni Week. The bitter-flavored Campari icing was a little strange, to be honest…but we still ate two of them. Okay, three.

It’s a doughnut…that’s covered in bagel seeds and spices. A few different doughnut shops in NYC and DC are offering these breakfast-food mash-ups, each with a slightly different twist. NYC’s Doughnut Project anchors the savory everything-bagel toppings to the fried dough with a cream cheese-flavored glaze. District Doughnut, of D.C., is filled with a fluffy cream cheese mixture, while Virginia-based B. Doughnuts, with a stall in D.C.’s Union Market, flavors theirs with a choice of bacon, chives, or lox.

Our savory doughnut creation, the Everything Cream Cheese, is on the menu daily thanks to your feedback. Can’t wait for you to try it! #happinessfound #doughface

HOME of the everything bagel doughnuts – don’t knock it til’ you’ve tried it #eater 📸: @_chriscruz

We’re not even sure what to make of this collab between Doughnut Project and Root & Bone, tbh.

Not satisfied with just the now-ubiquitous rainbow thing, these doughnuts from Doughnut Plant invoke the pink triangle, too.

Again from our friends at Doughnut Plant.

Frankly, we can’t even believe that gold and platinum leaf-covered doughnuts are a thing. Manila Social Club offers these luxurious bites only occasionally—typically on faux food holidays like “doughnut day” or the recent “tequila day.”

Happy National Tequila Day! So fortunate to have worked with @Patron Platinum, when @ManilaSocialClub created The Patrón Platinum Donut, influenced by the Patrón Margarita, the Rosa Picante. Using elements of rose, citrus, chili, and ginger. The Donut’s foundation is made with powderized rose ashes and infused with ginger giving the pastry a dark ash color. Inside there is a light rose infused whipped mousse, studded with a chili-calamansi Margarita gel made with Patrón Platinum. Each Donut is then individually hand dipped into an icing of Patrón Platinum and air brushed with edible silver powder. Finally, it is adorned with edible leaf giving it a brilliant and unmistakable finish. Every Patrón Platinum Donut is individually handmade. @patronracing1​#manilasocialclub#williamsburg#patron#platinum#agave#dessert#pastry#handmade#donut#luxury#filipinofood#doughnuts#margarita#donuts#tequila#liquor#donut#rose#margarita#tequilashot#nationaltequiladay

NYC, this is what 24k Pure Gold Leaf looks like on a handgilded Cristal Champagne (@louisroederer_) Ube Donut! Thursday​ is our last day to take Pre-orders for our 24K Golden Cristal Ube Donut for Friday, June 2nd, National Donut Day! All Donuts will be hand delivered to NYC Locations! Order Form Link in Bio! …… The 24Karat Gold Cristal Donut is made with Ube, a naturally purple sweet yam found in the Philippines and Cristal champagne. The Golden Donut is filled with an Ube mousse and a Cristal gelée. It is then covered in a Cristal icing and dusted with 24K Pure Gold Dust and hand-gilded with 24K Pure Gold Leaf. Every single Donut is handmade by Manila Social Club’s Executive Chef, Co-Owner and Creator of the Golden Cristal Donut, @BjornDeLaCruz. #manilasocialclub#cristal#golddonut#gold#ube#ubedonut#filipinofood#filipinochef#golden#goldendonut#puregold#vogue#refinery29#r29#brooklyn#manhattan#donut#24Kmagic#brunomars#donuts#champagne#dessert#nyc#nationdonutday#newyork#doughnuts

And then there are the doughnuts illustrating every single trend of the year.

Just some doughnuts we thought were really cute

Just a shoutout, while we’re talking doughnuts, to our favorite doughnut shop, Dough, which we love so very, very much. Feed us a passionfruit or hibiscus-glazed doughnut and you’ll be our best friend forever.