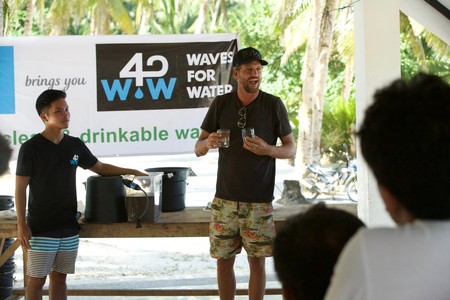 In 2009, professional surfer Jon Rose was aboard a boat off the coast of Indonesia as part of a surf trip. Rose made the pit stop en route to Bali, where he planned to distribute 10 water filters as part of his new clean-water initiative, Waves For Water.

Rose and the rest of the people on the trip were forced to stay on the boat that evening because the seas were too rough to make it into the port. At 5:16 p.m. local time, a 7.6 magnitude earthquake rocked nearby Padang, Indonesia, according to the U.S. Geological Survey. The quake was 30 miles west-northwest of Padang, located in Sumatra. The city wasn’t out of the woods yet, as a 5.5 aftershock occurred 22 minutes later, this time 25 minutes northwest of Padang.

The Indonesian government estimates that the quakes resulted in 1,195 deaths and significant damage to approximately 140,000 houses and 4,000 buildings. The hotel Rose and his fellow passengers were scheduled to stay at was reduced to mere rubble.

“It was shocking; I don’t think anyone can go through an experience like that without being forever changed,” Rose said. “We were basically at the epicenter of it. It was one of those crazy, twist-of-fate timing things.”

Instead of continuing his original plan of traveling to Bali, Rose, who was unscathed from the catastrophe, traveled inland to distribute the filters where they were needed most.

The incident turned a self-proclaimed “pet-project” into an obsession. Initially founded to provide a way for travelers to aid the communities they love so much, Waves For Water aims to help end the clean-water crisis around the globe. The non-profit organization has touched more than seven million people in more than 27 countries worldwide, including Sierra Leone, Haiti, India, Colombia, and Brazil. Waves For Water not only responds to global disasters such as tsunamis, hurricanes, and earthquakes—it also has long-term programs in place to improve clean water availability and quality in impoverished areas.

“There was so much death and destruction around me and it thrust me into a completely different place in my life instantly,” Rose said. “Not only did the experience polarize me, but the intention for the project was validated that I became obsessed. The filters I brought (originally for Bali) helped thousands of people. It became an obsession afterward and still is.” 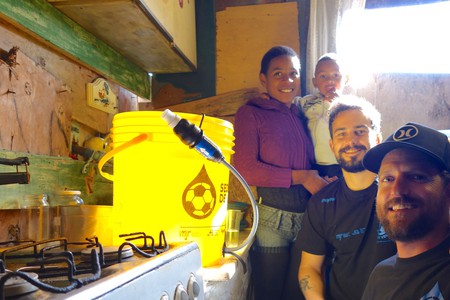 Jon Rose, Guga Ketzer and Jessica after they just gave her access to clean drinking water in favela Jardim Itapema in 2014 | © Red Bull

Waves For Water, which began as a way for surfers to give back to the various communities they interact with when traveling the world searching for the best waves, has since become a global initiative. Rose says focusing on the clean-water crisis can be attributed to his father. In 2004, Jack Rose founded RainCatcher, a non-profit organization committed to providing clean water—through catching and filtering rain water—to regions and the world.

“He put it on my map,” Jon said. “I wouldn’t have tackled the water crisis if I didn’t have that example.”

Waves For Water has active programs in 17 countries, and was recently featured in a documentary on Red Bull TV. The 52-minute film titled Waves For Water was released March 22 to coincide with World Water Day, a yearly United Nations initiative focused on tackling the global water crisis.

“They did a remarkable job showcasing the layers of what we do and, of course, the story behind it,” added Rose. “I’m proud of it.”