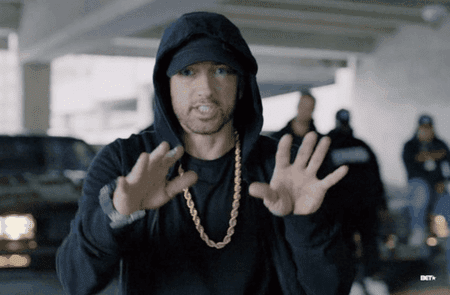 US rapper Eminem has hit out at Donald Trump in a savage freestyle rap.

The musician branded America’s President as racist and mocked his ‘orange’ tan at the BET Hip Hop Awards on Tuesday night during a four-and-a-half minute rap.

The Real Slim Shady labelled Trump a ‘kamikaze which will probably cause a nuclear holocaust’ while praising former President Barack Obama.

The FULL verse that EVERYBODY is talking about! @eminem BODIED THIS! #HipHopAwards pic.twitter.com/zoS0wEwjQF

He also attacked Trump for his delayed visit to hurricane-ravaged Puerto Rico and mentioned NFL player Colin Kaepernick who protested police brutality by kneeling during the US national anthem.

Eminem rapped: ‘Plus he gets an enormous reaction/ When he attacks the NFL so we focus on that and/ Instead of talking Puerto Rico or gun reform for Nevada/ All these horrible tragedies and he’s bored or would rather/ Cause a Twitter storm with the Packers.’

I appreciate you @Eminem ✊🏾 pic.twitter.com/nwavBwsOkQ

He added: ‘Racism’s the only thing he’s Fantastic 4 cause that’s how he gets his rock off, he’s orange.’

Eminem pleaded with fans to make a stand against Trump.

‘The rest of America stand up. We love our military and we love our country but we f****** hate Trump.’

Watch the full rap in the video above.