Was Rosie the Riveter Ever Truly a Feminist Icon? 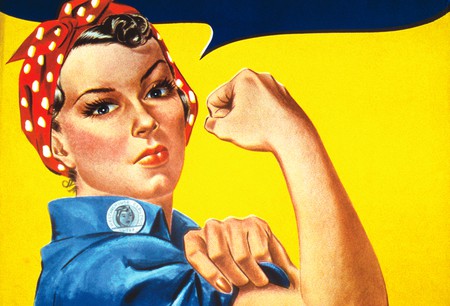 In 2014, Beyoncé posed as Rosie the Riveter, the iconic WWII-era character that encouraged women to get out of the house and go to work in factories and shipyards across the nation. The Internet immediately fell in love with the image, as it is wont to do with anything Queen Bey does. Yet the Internet also likes to offer a fair amount of criticism, and this time it came in the form of an essay by Rebecca Winson, published via The Guardian.

In it, Winson points out that the Rosie we are most familiar with was painted by a man, J Howard Miller, as propaganda. She writes:

“His propaganda conveniently ignored the fact that women would have been expected to carry on with the housework once they got in, and then, after a war spent being paid nearly 50% less than their male colleagues, would be sacked. When we dress up as her, we’re dressing up as an airbrushed fib. Of course, some argue that this re-appropriation is dissent, but even if you believe that there’s still something problematic with the riveter symbol.”

She went on to say that Rosie, since the 1940s, has stood alone. There has never been a modernized symbol of the working-class woman to replace her. “Isn’t it time we found a new Rosie, a realistic representation of what it’s like to be a woman and work today?” Winson asks.

Interestingly, the Rosie we know was never explicitly named Rosie at all. It’s a meandering journey as to how this woman—with her scarlet polka dot scarf and her rolled up sleeve—became the face we most commonly associate with this character.

WWII began in 1939, with the United States entering the conflict following the 1941 bombing of Pearl Harbor. As American men headed off to war, women headed to work, as they had during WWI. New women employees, as well as those who were already working other types of jobs, took on factory roles typically filled by men. From 1940 to 1945, women went from making up 27% to 37% of the work force.

The American government supported this action through propaganda, which came in the form of posters, films, and songs. In 1942, lyricist Redd Evans and composer John Jacob Loeb wrote the song “Rosie the Riveter.” Several artists recorded it, and it featured lyrics such as “All the day long, whether rain or shine/She’s a part of the assembly line/She’s making history, working for victory/Rosie, the riveter.”

In May of 1943, a Norman Rockwell illustration appeared on the front cover of the Saturday Evening Post. The image featured a woman worker, with the name Rosie scrawled on her lunchbox. She held a riveting gun in her arms and crushed a copy of Hitler’s Mein Kampf beneath her shoe. He based his illustration on a woman named Mary Doyle Keefe, a willowy, 17-year-old phone operator who was not nearly as muscular as Rockwell painted her. 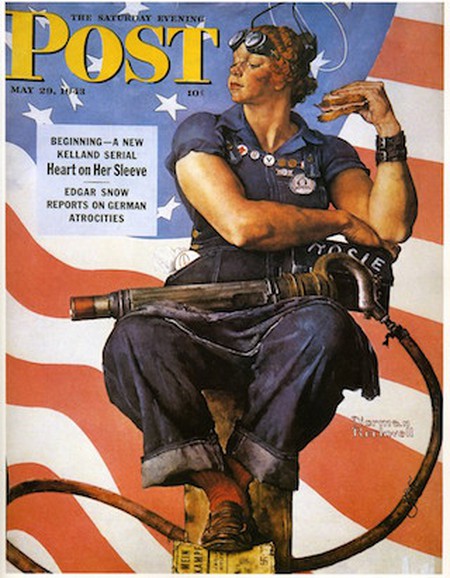 J Howard Miller’s Rosie, however, was never explicitly given the name Rosie, contrary to popular belief. She was one of several illustrations commissioned by Westinghouse Electric in 1942 to boost employee morale. She was likely based on one of two real women, neither of whom were named Rosie: Geraldine Doyle or Naomi Parker. Doyle was a 17-year-old girl working in a metal pressing factory in Michigan; however, she only worked for a few weeks in that factory before taking a job at a soda fountain. Doyle, who died in 2010 at the age of 86, was unaware that she had (perhaps) inspired the poster until the ’80s. Though Doyle has been widely credited as the woman in the photo, other evidence indicates she was not. Rather, the photo might actually be Naomi Parker. Parker would have been 20 at the time and was working with her sister as a mechanic at a naval base in Alameda, California. Seton Hall University’s Professor James J. Kimble located the original photo, and the tag on the back provides Parker’s name, alongside the California city.

Several other Rosies also add to the mythos. Rose Bonavita was a riveter in New York, while Rosalind P. Walter was a Long Island riveter who is said to have inspired the song. Rose Will Monroe worked at the Willow Run Aircraft Factory in Ypsilanti, Michigan, and starred in promotional films as Rosie the Riveter.

Together, all of these women form the composite character we have in our minds today. However, Rosie wasn’t even the first of her kind. Canada entered WWII in 1939, and in 1941, it introduced Ronnie, the Bren Gun Girl. She was based on real-life worker Veronica Foster—a much simpler origin story.

As to whether Rosie is or ever was a feminist icon seems to be in the eye of the beholder, and many people think she’s a false one—born out of war-time propaganda, more symbolic of patriotism than women’s empowerment. This belief is born out of the fact that when the war was over, women went back home. Rosie fell out of favor, and the propaganda machine turned to domesticity. The baby boom happened. Riveters became homemakers.

Though some have re-appropriated Rosie’s image for more modern causes, Teresa English of The Humanities Index suggests abandoning the character. She writes:

“The 1950s are a dark time in women’s history, and it began with propaganda and tools such as Rosie the Riveter. Feminists should reject the use of ‘We Can Do It!’ as it ignores a pivotal time in America’s history and minimizes the impact of propaganda. Feminists would do well to recall George Santayana’s words: ‘those who do not remember the past are condemned to repeat it.’”