Following The Lover (1992) and Cet amour-là (2001), the turbulent emotional life of the French author and filmmaker Marguerite Duras has become the subject of another film. Culled from Duras’s feverishly written wartime journals, Emmanuel Finkiel’s Memoir of War observes Duras as she waits in Paris for her husband Robert Antelme to return from a concentration camp. In 1944, he had been arrested by the Gestapo and sent to Buchenwald; it was Antelme’s fellow Resistance fighter François Mitterand who eventually discovered him near death at Dachau.

Mélanie Thierry, previously best known to American audiences for her acting in The Princess of Montpensier (2010) and TV’s The Hollow Crown (2012), is astonishing as Duras. Her agonized rendering of waiting involves frantically standing around in her room and sparring nervously with Pierre Rabier (Benoît Magimel), a dangerous Nazi collaborationist who might be able to bring her information about Antelme. Thierry joins the cinema’s lengthening list of women waiting on a knife edge for the return of their menfolk, in such films as The Unchanging Sea (1910), Four Sons (1928), Gone With the Wind (1939), How Green Was My Valley (1941), Since You Went Away (1944), The Searchers (1956), and – via Eowyn – The Lord of the Rings: The Two Towers (2002).

Here are Thierry and Finkiel on the ever-contentious figure of Marguerite Duras and her agonizing wait for news of her husband. 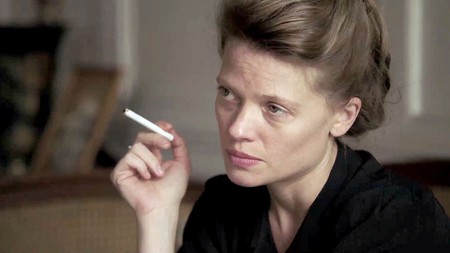 Culture Trip: Emmanuel, did you consciously draw on your uncle and grandparents’ deportations to Auschwitz when you were making Memoir of War?
Emmanuel Finkiel: Yes, of course, because the position my father was in – waiting for his family to come back – was exactly the position Marguerite was in while she was waiting for the return of her husband. This was something that was always deep in my unconscious. When I read Marguerite’s book, I observed my own reactions and noticed they were similar to my feelings about the absence of my family.

CT: Mélanie, did you make a differentiation between Marguerite Duras and the woman describing her experience in the book?
Mélanie Thierry: It’s Marguerite Duras’s own account of what happened to her, but instead of making herself the heroine, she projects herself in a work of fiction. When we were considering how she should be played, there were two ways it could be done. The first could be from the perspective of an older woman looking back on her intimate journals from the time and by reading through them reliving the experience of what she experienced. The second option – which is the one we chose – was to relive it as though it were happening in the present, as the Marguerite Duras at that point was not the Marguerite Duras we know now. She wasn’t a famous author then, but a young woman who didn’t have that life behind her. 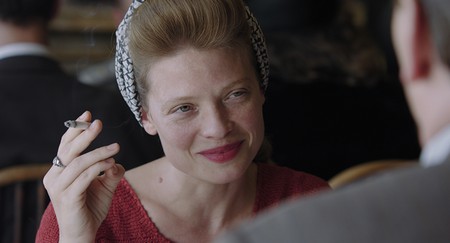 CT: You convey such depth of emotion when Marguerite is alone waiting for Robert. What was going on in your mind?
MT: I took the time to prepare for those scenes and I tried as best I could to understand all the connections between Marguerite and the other people, and also how my feelings reflected things I had personally experienced, the things we all go though. I’m not a method actor – it’s not my way of working – so I just tried to understand and relate to her. What was most important was to be totally there in the moment.
GF: Quite late in the film we realize Marguerite and Dionys Mascolo [played by Benjamin Biolay] were lovers. It was all quite civilized between Marguerite, Dionys and Robert; the three of them lived together. But as a viewer we feel a sense of betrayal and question Marguerite’s feelings toward Robert.
EF: The real story is much worse than how Marguerite describes it in the book because she doesn’t talk about Dionys at all as a lover. In the film, we’re able to give some small hints or gestures. Marguerite in the book hides everything about Dionys, which makes the ending, when she decides she’s going to leave Robert because she wants to have a child with Dionys, all that much more abrupt and violent – it really hits the reader. When I read the book, that’s what made me cry and want to re-create that kind of emotion in the film. 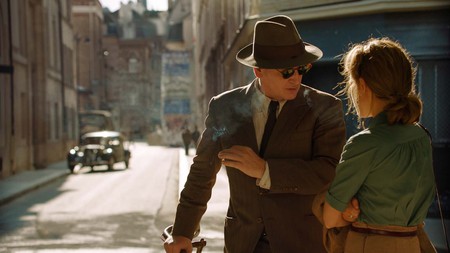 CT: Mélanie, did you feel that Marguerite is a compromised woman because of her divided loyalties?
MT: I think she was a very complex woman torn between feelings of guilt and self-disgust. Her life with Robert was not a common marital life; it was a disturbed relationship. It had started to deteriorate before the Occupation because Robert had had mistresses, and when Marguerite became pregnant she was very disgusted by it. When the child was born dead, suddenly she was overwhelmed with feelings of guilt about it.

CT: Some of the most powerful moments in the film occur when Marguerite is waiting to meet the Nazi collaborationist Rabier on the bridge and on the square by the church. What’s remarkable about their interaction is that she gets the upper hand. Do you think it’s because he’s susceptible to her as a woman?
EF: If you look at the way he looks at her the first time he sees her, it’s as if he’s a bird of prey and she’s the prey. I think he’s attracted to her because she represents the intellectual class, which he hasn’t been able to break into. He thought that through her he would be able to possess something from that world.

CT: What became of the real man?
EF: He was judged, convicted and shot. Marguerite had mixed feelings about him. During his trial, she appeared twice as a witness. The first time, she confirmed that he was responsible for Jews being deported. But then she requested to be heard a second time, and she spoke almost as if she were giving him excuses. She would say, “Yes, but he managed to save these Jews or these Jews.” She was very torn, to the extent that the president of the jury told her she was crazy.

CT: Madame Katz [played by Shulamit Adar], the old Jewish lady hoping against hope that her daughter will return from a concentration camp, strikes me as an important character in the film.
EF: Yes, partly because Robert’s destiny has pretty much followed the destiny of the Jews. My father was like Madame Katz. For the rest of his life, I think he always had that idea that he would someday see his parents again. Madame Katz is also a reflection of Marguerite Duras, who generalizes the whole idea of waiting for someone to return. Marguerite is not just speaking for herself, but speaking for all people who have waited, not dependent on a specific war or a specific time.

CT: Mélanie, was it more important for you to empathize with Marguerite than to like her?
MT: They are connected, so I can’t separate those ideas. At times she was awful. She was amazing and she was exasperating, and I think it’s all these elements that make her so human.

Memoir of War opens in the US on August 17.