Tracy K. Smith Has Been Announced as the Library of Congress's New Poet Laureate 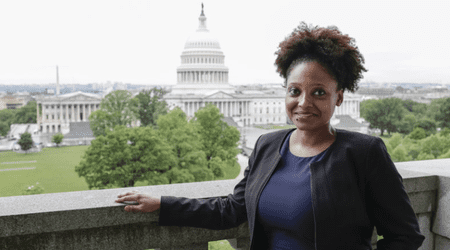 The 45-year-old Pulitzer Prize winner falls is the 22nd poet to receive the prestigious national honor.

The Librarian of Congress Carla Hayden announced the Pulitzer Prize-winning poet and Princeton professor Tracy K. Smith as the Library’s new Poet Laureate. She is the 22nd poet to receive the honor, succeeding Juan Felipe Herrera.

“It gives me great pleasure to appoint Tracy K. Smith, a poet of searching,” Hayden said in a written announcement. “Her work travels the world and takes on its voices; brings history and memory to life; calls on the power of literature as well as science, religion and pop culture. With directness and deftness, she contends with the heavens or plumbs our inner depths—all to better understand what makes us most human.”

“I’m very excited about the opportunity to take what I consider to be the good news of poetry to parts of the country where literary festivals don’t always go,” Smith told the New York Times. “Poetry is something that’s relevant to everyone’s life, whether they’re habitual readers of poetry or not.”

Smith’s appointment is the latest accolade in an accomplished career that includes three books of poetry, including the science-fiction tinged “Life on Mars” (2011), which was awarded the Pulitzer Prize for Poetry in 2012; “Duende” (2007), winner of the 2006 James Laughlin Award and the 2008 Essence Literary Award; and “The Body’s Question” (2003), winner of the Cave Canem Poetry Prize. She is also the recipient of many other awards and honors including the Rona Jaffe Writers Award, a Whiting Award, a fellowship to the Academy of American Poets, which is given to one poet each year to recognize distinguished poetic achievement. In 2015, she won the 16th annual Robert Creeley Award and in 2016 was awarded Columbia University’s Medal for Excellence.

Also in 2015, Smith’s memoir “Ordinary Light” became a a finalist for the 2015 National Book Award in nonfiction and was selected as a notable book by the New York Times and the Washington Post.