Top Slam Poets From Around The World 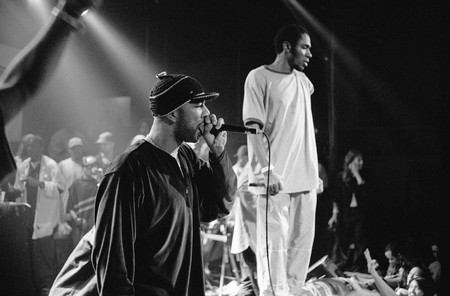 Slam is a form of poetry that popped up in the 1990s, revitalizing the genre. It is known as one of the most vital and energetic poetry movements, paying homage to poetry as an oral tradition from the Beat and Negritude poets who were devoted to the spoken word. Slam Poetry often draws its inspiration from politics, race, economics, and gender injustices, alongside current events. Here are our favorite slam poets from around the world.

To understand Slam Poetry, one must start with Saul Williams, the grandfather of spoken word lyrics. Although undefined as an artist, Williams starred in the 1998 drama film entitled SLAM. Throughout the film Williams, who plays Ray Joshua, goes through a game of feelings and emotions with viewers along for the ride. Diatribes and monologues fill the screen as heartfelt words float into the listeners’ ear canals. Williams cannot be classified as only a spoken word artist, he is also poet, a performer and a musician.

Hailing from the 9th ward of New Orleans, Sunni Patterson has made quite a name for herself in the Slam Poetry world. She has been featured on HBO’s Def Poetry Jam, BET’s Lyric Cafe, in addition to speaking at the Panafest in Ghana, to name a few of her performances. Patterson combines the heritage of her native New Orleans culture with her enlightened view of the modern world. Her mission is to ‘aid in the awakening, the revival, and the remembrance of our gifts and voices, enabling us to move to a greater space of self empowerment, creativity and actualization.’

Yasiin Bey, a.k.a. Most Def, is a household name these days, and if folks don’t know him, they know his hip-hop group Black Star. Mos Def is a master of lyrics and spoken word. Not having to compete in Slam Poetry contests or perform stand-up style, Mos Def is another versatile artist who doesn’t draw a line in the sand for himself and his art. Most Def is a passionate activist who stands up for social and political issues, including police brutality.

This African-American Virginia Tech University professor was born in Knoxville, Tennessee, and is a self-described poet. Famed writer and orator, Nikki Giovanni has sought to put ideas together in unusual, unique ways. Giovanni isn’t a typical Slam Poetry artist, but she is a spoken word poet nonetheless; an artist that many modern poets will cite as an inspiration. Giovanni writes insightful poetry that attests to the world around her and her ever-evolving experiences. For reading, pick up the Grammy-nominated Nikki Giovanni Poetry Collection.

Beau Sia has quite a reputation in the poetry world. He is the winner of two National Poetry Slam Championships, and has been featured on all six seasons of the Def Poetry Jam. Born to Chinese immigrants from the Philippines, Sia made his way to New York where he studied Dramatic Writing at NYU’s Tisch School of The Arts. Touring all around the world, Sia has performed in front of international crowds, pleasing them all. He was also in the original cast of the Tony Award winning Def Poetry Jam on Broadway. For reading, pick up A Night Without Armor II: The Revenge and the Undisputed Greatest Writer of All Time.

Taylor Mali is a poet, a teacher, a voiceover artist and much more: another artist not to be placed in a box. Best known for the poem ‘What Teachers Make,’ Mali has also appeared in the documentary Bowery Poetry Club, in SlamNation and Slam Planet. As former President of Poetry Slam Incorporated, Mali believes in promoting this version of poetry.

Eric Ott, a.k.a. Big Poppa E combines stand up comedy, poetry and dramatic monologue in his performances. His poetry has been dubbed ‘an icon for effeminate males,’ and he is considered a ‘leader of a new men’s movement,’ for his ‘Wussy Boy Manifesto’ poem. Big Poppa E currently has a Kickstarter campaign and a Greatest Hits album for purchase through various outlets.

This Latina artist began her career in New York city. She was the youngest Latina poet to earn a Grand Slam title in 2001. Maya del Valle also won the National Poetry Slam Individual title that same year. Landing features in O Magazine, Latina Magazine, The Source and Smithsonian Magazine are just a few of her accolades. To top this off, in 2009 she performed at the White House for Michelle Obama and the President.

Lemon Anderson has the most aired episodes of HBOs Def Jam Poetry. Raised in Brooklyn from Puerto Rican and Norwegian descent, Lemon was orphaned at a young age and became involved in serious crime. Fortunately, he found mentors who spotted his ability to write and perform, and who nurtured his talent. To this day, Lemon Anderson’s performances and writings have received acclaim and numerous accolades. He won the Tony Award for Best Special Theatrical Event. For a bit of reading, pick up Straightrazor, his collection of poems.

Tampa Harper, a.k.a. Georgia Me, has a slew of awards behind her name: Tony, Emmy, Peabody, Bafta, and Kuumba to name a few. Hailing from Atlanta, Georgia, this Southern Belle has blown the minds of many. Ms. Me currently hosts Righteous Workshops, where she aims to elevate a person’s writing ability as well as their life. Many of her spoken word poetry comes from life experiences that she has either witnessed or experienced. She has also been on panels for the NAACP, SCLC and PUSH coalition on topics ranging from Gentrification to Self Image and Popular Culture.

Alex Dang hails from Portland, Oregon, and is most known for his slam poem ‘What Kind of Asian Are You.’ Currently a Junior at the University of Oregon, Dang is double majoring in English and Chinese. Dang uses his poetry as a catalyst to understand life’s hardships and various relationships. Dang aspires to be a member of the Individual World Poetry Slam Competition.

One can find French artist, Gabrielle Tuloup, performing everywhere from small bars to grand stages. Winner of the 2010 Grand Prize of the Francophonie, and Slam champion of France as well as the World Cup in 2011. Tuloup is on a journey of self-discovery, and uses her passion for words to describe the world as it sees her and as she sees it. When Tuloup performs, the public can see her think about the sounds and rhythm of language. She makes poetry a living practice.