Credited for contributing towards the development of the science fiction and mystery genres, Poe is best known as a leading figure in the American Romantic movement. Plunge into the depths beyond the obvious favourites of Poe, such as The Masque of Red Death, and The Fall of the House of Usher, and find 10 alternative tales of horror, which are sure to chill you to the very marrow. 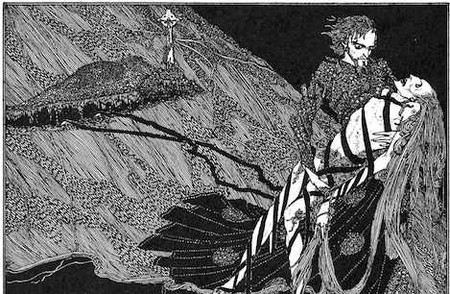 An exploration of Poe’s favoured theme of the death of a beautiful woman, Berenice offers an unsurprisingly grisly alternative to Annabel Lee. The tale traces the mental decline of the monomaniacal Egaeus, who is filled with an all-consuming obsession concerning the teeth of his affianced, Berenice. Falling into one of his cataleptic fits after Berenice’s death, he awakes, disoriented and terrified, to the screaming of the maid, who has not only discovered that Berenice was erroneously buried alive, but also that her coffin was subject to the indignities of grave-digging. Dismayed, Egaeus turns to find, next to his bedstead, a dirtied shovel, thirty-two bloodied teeth, and a poem about ‘visiting the grave of my beloved’. Considered horrifying to its contemporary readers for its excessive violence, Berenice is, in equal parts, a fascinating and repulsive tale on destructive obsession. 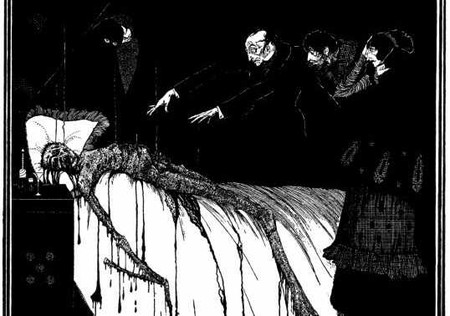 Told with the clinical detachment of a doctor’s report, Poe had to release an acknowledgement, albeit reluctantly, that the tale was one of pure fiction, and not of biographical fact, as many members of the public genuinely believed the story. Treading the fine line between sensationalist horror and investigative science fiction, the story traces the narrator’s fascination with, and investigations into, mesmerism, using his expertise to put a dying man, M. Valdemar, into a mesmeric trance. Seemingly innocuous, the story then goes into the macabre, as the dying man, in his trance, states that he is dying, and then, that he is dead! He continues in the state for months on end, before, being brought out of his trance, he becomes ‘nearly liquid mass of loathsome — of detestable putrescence.’ Gory and disgustingly vivid, this tale is evidence of Poe’s enduring interest in, and knowledge of, the developing pseudo-sciences and the human anatomy. 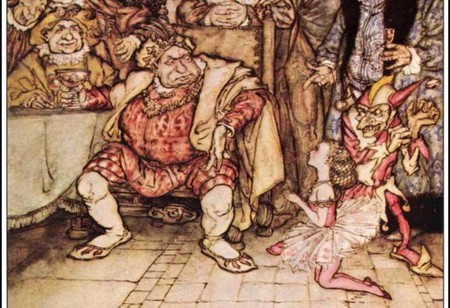 An explosive portrayal of a vendetta successfully fulfilled, Hop–Frog ironically both belies and exemplifies the idiom that ‘revenge is a dish best served cold’. Related by a narrator almost entirely dislocated from all the real action, the story is set in the court of a jocularly cruel king, who prides humour over wisdom, and revels in laughing at those around him. The story takes its name from the misshapen dwarf who is kept, enslaved, bullied, and ridiculed by the king, until the climax of the story when, at a fancy-dress masque, the dwarf manages to exact his revenge for all the cruel excesses of by-gone days. Violent and gruesome, Hop-frog is especially notable for the frightening and disturbing scenes in which a terrible and bone-chilling sound is heard – a sound which is revealed to the awful grinding of Hop-Frog’s teeth as he seethed with anger and loathing. 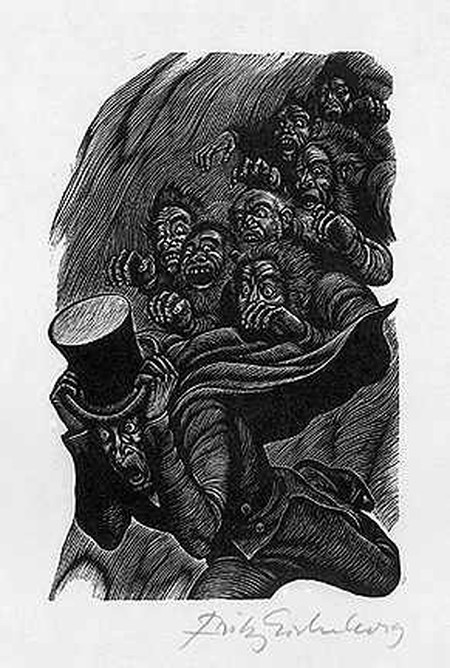 Imp of the Perverse | © Photobucket

A chilling exploration of human idiosyncrasies, The Imp of the Perverse in no less frightening than its supernatural counterparts in its distinct lack of the phantasmagorical. Told from the point of view of a death-row criminal, he casually sets the scene by going into a philosophical discourse about man’s perversity, before telling the reader how this perversity is to be his downfall. Having murdered a man for his estate, a crime that went entirely unsuspected, the narrator then describes how he agonized over the question of his ‘capability to confess’; he then, at the ‘instigation’ of this ‘imp’, confessed all to the public. Though less well known than The Black Cat and The Tell-Tale Heart, this is an equally powerful portrayal of inherent perversity, and of the debilitating effect of the guilty conscience. 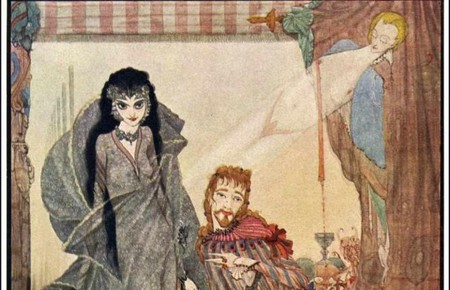 Yet another literary investigation of the death of a much loved beautiful woman, Ligeia is a more nuanced and subtle exploration of the limitations of Death, than its counterpart Berenice. Told in first person, with a certain air of retrospective nostalgia, the narrative opens with the speaker waxing lyrical on the many virtues of the unparalleled Ligeia, and continues onwards to tell of her marriage, and her eventual death. Mad with grief, the narrator promptly re-marries, though the wife dies shortly after. It is then that the gruesome climax of the story is revealed; for, whilst keeping vigil, the narrator realizes that, not only has the corpse re-animated itself, it has done so in the form of Ligeia, who has broken the fetters of death. Profoundly disturbing and passionate, the tale has also become known for the inclusion of the poem ‘The Conqueror Worm’, which the dying Ligeia wrote. 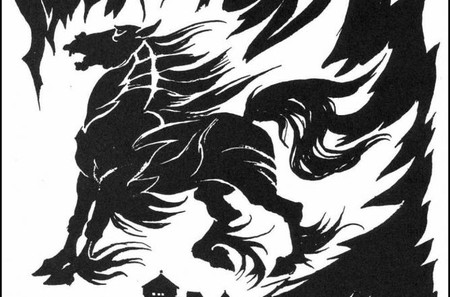 The first of Edgar Allan Poe’s short stories to be published, Metzengerstein is a horrifying tale of insanity and arson that has many elements of Romeo and Juliet, except without the romance or the melancholic reconciliation at the end. Named after the Metzengersteins, this family has had a bitter enmity with the Berlifitzing family for centuries. The tale follows Frederick, the last of the Metzengersteins, detailing his cruelty, his decline, and the strange circumstances of his death, in which he, unable to control an untamed horse, literally rides to his own death by flames; this is deemed to be a fitting punishment for the previous excesses and heroic cruelties he practiced throughout the story. Both adhering closely to and exaggerating the popular Gothic conventions of the time, Metzengerstein has often been under considerable debate by Poe scholars as to whether it is satirical or sensationalist. 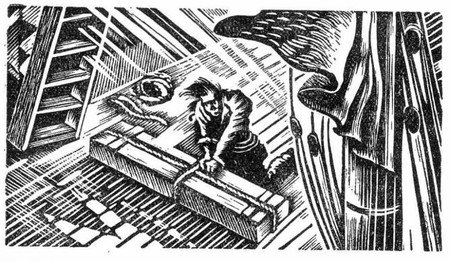 Combining many previous commonly prevalent elements in other Poe short stories, such as the presence of an ‘oblong box’ (which evidently turns out to be a coffin) and a disastrous sea voyage. The Oblong Box, traces the mysterious circumstances and suspicious behaviour of the Wyatt family, who have embarked on the same sea voyage as the unnamed narrator. Though fundamentally macabre, is delightfully funny in its portrayal of an utterly ignorant and idiotic narrator, who, despite all the evidence indicating the presence of a dead body inside a coffin, believes the box with ‘the peculiar shape’ and the ‘odd odour’ to be a particularly valuable copy of The Last Supper, which his jealously possessive and secretive friend has acquired and refuses to show. With the narrator acting as amateur sleuth, The Oblong Box is considered Poe’s continued exploration of the detective genre, which he first ‘debuted’ in The Murders in the Rue Morgue (1841). 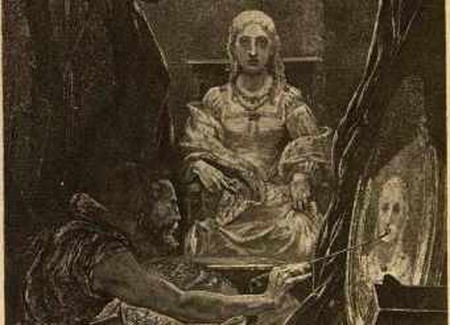 Known as one of the shorter stories in Poe’s collections (in its initial publication, it only filled two pages!), and for being the inspiration for the band of the same name (now disbanded), The Oval Portrait is a novel and disturbing exploration of the relationship between art and life, which was eventually more fully expanded and investigated in Wilde’s The Portrait of Dorian Gray (1891).The protagonist of the story is a neglectful, selfish, and obsessive artist, who in his pursuit of perfection, allowed his wife to waste away as he assiduously laboured over her portrait, and thus allowed his life-like art to suck away, almost literally, the life-force and vitality of the compliant and loving wife. Using the death of a beautiful woman once again in its climax, the short story recounts the deadly consequences of addiction in any form, the addiction, in this case, being the artist’s obsession with creating hyper-realistic art. 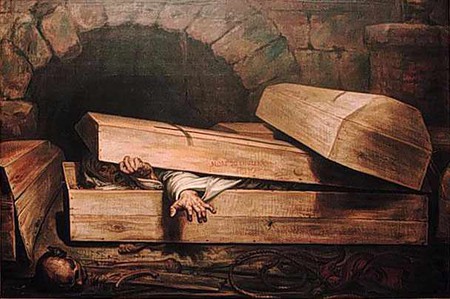 Tapping into the almost obsessive concern with premature burial at the time (indicated by the alarming proliferation of inventions which were created with a view to prevent such a situation), Poe’s story is a disquieting examination into the hypochondria and neurosis of one exceptionally fearful individual, who spends his entire life anticipating, fretting over, and trying to prevent the possibility of being buried alive. His alarm is in part caused by his propensity to lapse into periods of catalepsy, in which he exhibits all of the symptoms of being dead without actually being dead. Ironically enough, though the protagonist is hysterical and fearful for a considerable length of the plot, it takes the actual discovery that his worst nightmares have been fulfilled (and he has been buried alive), for him to overcome and dismiss his fanciful delusions. 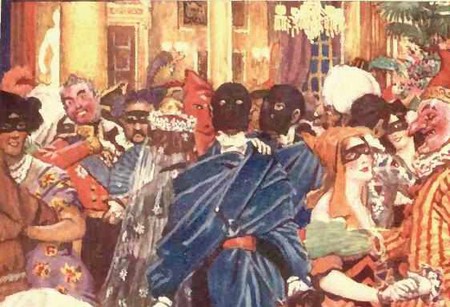 Byam Shaw’s illustration for Poe’s William Wilson in ‘Selected Tales of Mystery’ (London : Sidgwick & Jackson, 1909) on the frontispiece with caption ‘A masquerade in the palazzo of the Neapolitan Duke Di Broglio’ | © Byam Shaw/Wikicommons

Almost a reverse Dr Jekyll and Mr Hyde (1886), the narrator, who refuses to give his actual name, details descent into criminal debauchery, though he loftily absolves himself from any blame. However, during his life, Wilson finds himself constantly dogged by an individual who is, in almost every respect, his mirror image, and who refuses to bow down to his childish cruelty. This ‘twin’ thwarts him at every turn: he reveals him to be a cheater at cards, and tries to prevent his seduction of a married woman. Enraged by this ‘high-handed behaviour’, Wilson savagely kills him, only for him to realize he has killed his better self, and thus destroyed any hope of redemption. Inspired by an article of Washington Irving’s, William Wilson is an allegory for life, portraying the calamitous consequences of ignoring one’s own conscience.