Tips and Advice For Beginner Golfers 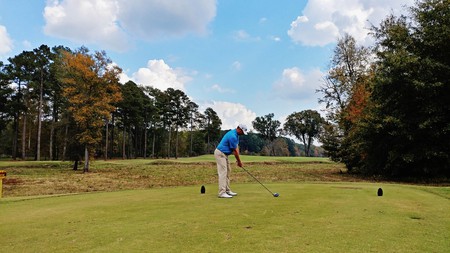 Cameron Wiebe started playing golf when he was 16 years old. He was initially drawn to the sport, playing with his grandparents, because he had just received his driver’s license and wanted to drive the golf carts.

“Little did I know it would be the vehicle in which I’d make a living from as a career,” Wiebe said.

Wiebe turned professional in Canada when he was 19. He’s been involved in the game and as a golf pro up and down the east coast for the majority of his career.

For the past three years he’s been the general manager at Champions Retreat, a 27-hole golf club in Evans, Ga. The pro shared his tips to help any casual or novice golfer improve their game and keep golf fun, because, c’mon, we all know it can get very frustrating more times than not.

According to Wiebe, novice golfers typically struggle off the tee and with approach shots. While they can make up for erratic tee shots, struggling around the green can be a daunting task, decimating confidence on the course. Wiebe recommends practicing the basic putt-stroke with an 8-or 9-iron less than 30 yards away from the green to build confidence with strong finishes to holes.

“I find many players would enjoy the game more if they could actually finish holes,” he said. “Practice short, level shots to get the ball on the green or even close to the hole, which improves chances to close out a hole.”

Center the ball in your stance, shift your weight to your front leg (line up the buttons on your shirt in front of the ball as reference) and apply a putting stroke with an 8-or 9-iron.

Golf can be a frustrating game. An ideal tee shot can be followed up with an errant slice into a bunker or water hazard. Remember, golf should be fun. It is, after all, a game. That’s why Wiebe recommends beginners play with a group of friends, particularly off the forward tees.

“There’s a stigma that men play from the back tees and women from the front, but that’s wrong,” Wiebe said. “We teach kids and beginners to play the shortest course so they can experience success before lengthening the game. It means shorter shots, but chances of success will increase.”

Tip 3: Become a regular at a local facility

In the TV show Cheers, Norm Peterson was such a regular at the Boston establishment that the other patrons boisterously yelled “Noooorm” whenever he entered the front door.

Wiebe suggests golfers strive for a Cheers-like feel at a local facility where they can become regulars. Being a common face in the crowd and the convenience of the facility’s proximity will only improve your comfort level before you start swinging your clubs.

“Most golfers quit because they golf so infrequently and when they do play, they’re unsuccessful at it,” Wiebe said. “You have to make it part of your routine. That doesn’t mean practice for endless hours, but find a convenient place near you that you can work into your schedule on a relatively routine basis.”

Start out basic. Many people, no matter what sport or activity they’re just getting into, think the most expensive and fanciest equipment translates to immediate success. That’s not true. Wiebe wants novices to obtain their own, basic equipment (putter, wedge, 7-iron, 3-wood) and get comfortable with that.

Not having to rely on renting/borrowing clubs or dealing with the pressure of trying to get your money’s worth out of an expensive set builds confidence.

“Anything that a player can do that prepares him or her in advance of showing up to a facility lowers the chance they’re intimidated,” Wiebe said. “It’s a big problem in golf.”