This Non-Alcoholic Spirit Will Change Your (Mocktail) Drinking Game 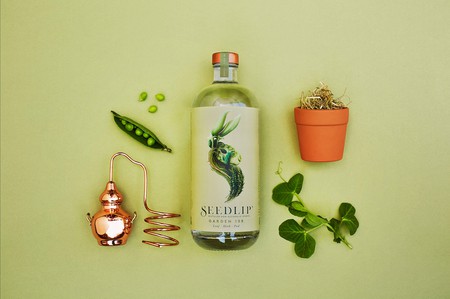 The product of a British farmer’s quest to improve the state of alcohol-free cocktails has finally made it Stateside… and will soon be improving booze-free drinking worldwide.

Mocktails, or alcohol-free cocktails, are taking off around the world as a delicious way to enjoy a booze-free night out. Until recently, though, bartenders have been limited by the ingredients available to them—a fact no doubt noticed by non-drinkers who’ve encountered every possible permutation of sparkling lemonade on mocktail menus, but often little more.

Bartenders have a new tool in their mocktail-making arsenal now though, with the Stateside arrival of Seedlip, the world’s first distilled non-alcoholic spirit. It’s currently available in two flavors—Garden 108 and Spice 94. Spice is flavored with allspice, cardamom, oak, lemon, and grapefruit, and tastes of Christmas baking spices; Garden is flavored with peas, hay, spearmint, rosemary, and thyme, and tastes of a walk through the greenmarket with a slightly peppery bite.

Seedlip is the brainchild of Ben Branson, who hails from a family of farmers and cites his first flavor memory as sitting in pea fields with his grandfather, eating peas. “I love allspice and I’m obsessed with peas,” so he figured, “let’s build flavor profiles around those.” Branson was also inspired by The Art of Distillation, a distilling manual originally published in 1651, an actual copy of which he placed in my hands (after handing me white cotton gloves to wear) a moment after we met.

Seedlip has been available in the UK for about a year and a half, and has just reached Stateside, where it’s currently found in the very best bars and restaurants. In New York, it’s carried at The Dead Rabbit (the world’s best bar), Eleven Madison Park (the world’s best restaurant), and EMP’s sister restaurant, The NoMad. In the Bay Area, it’s at The French Laundry, at The Aviary in Chicago… you get the idea. It’ll reach Australia and much of Europe and Asia in the near future.

🌿 Seedlip Garden 108 & Spice 94 now available internationally! You can order directly from us on www.seedlipdrinks.com

The goal of a mocktail isn’t to replicate the flavor of alcohol, so much as to find other ways to add the complexity and depth of flavor that alcohol usually lends to a cocktail, toning down the sweetness of the common fruit-and-soda combination; Seedlip addresses that need.

As a spirit, Seedlip is possibly best compared with gin, although it’s free of the requirement to include juniper. You can drink it straight, but the intensity of its flavor means it’s better when mixed, taking over the role of an alcohol base in a cocktail. The easiest option is to pour in some tonic water and call it good, but we’ve seen it mixed with every kind of citrus, with tomato water, and various other combinations. We can’t wait to see what other things bartenders do with it as they begin to get their hands on a bottle; everyone we’ve talked with has been eager to start experimenting with it.

The only potential problem is, a bottle of Seedlip costs about as much as a bottle of premium gin. A couple of bartenders we’ve spoken to have expressed concerns that using the spirit would require them to raise the prices of their alcohol-free drinks, which have traditionally been priced much lower than cocktails containing alcohol.

Would you pay as much for a delicious and well-crafted but alcohol-free drink as you would for a “normal” cocktail? We would. We’re curious to see whether that’s something that might catch on.