This Map Shows 'The World According to Donald Trump'

Since the beginning of his presidential campaign, Donald Trump’s worldview has often been the subject of intense debate.

Now that he is the President of the United States and the most powerful man in the world, it’s no surprise he’s been the butt of everyone’s joke.

Bulgarian artist Yanko Tsvetkov recently decided to get in on the joke by creating a map that supposedly shows every offensive thing the President-elect has said about people and other countries.

Earlier this year, we introduced you to Tsetkov’s global ‘stereotype maps’, which became so popular that he ended up publishing two books devoted to a load of his hilarious satirical images: Atlas of Prejudice: The Complete Stereotype Map Collection.

Well, Tsvetkov has struck again, this time with ‘World Map According to Donald Trump 2016’: 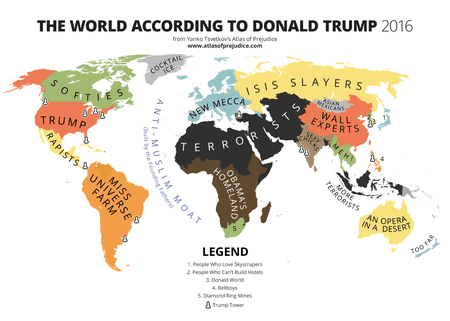 Tsvetkov makes references to various statements Trump made during his campaign in the map, including his involvement in the ‘Miss Universe’ beauty pageant franchise, his suggestions that parts of Europe were ‘no-go areas’ for non-Muslims, and, of course, his love of walls. 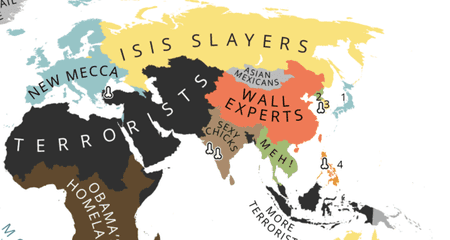 In a post on his website, Tsvetkov wrote, “Trump, for all his potential as a shrewd businessman, actually possesses the mentality of a rural alcoholic whose only experience with political debate starts and ends at a local pub.” 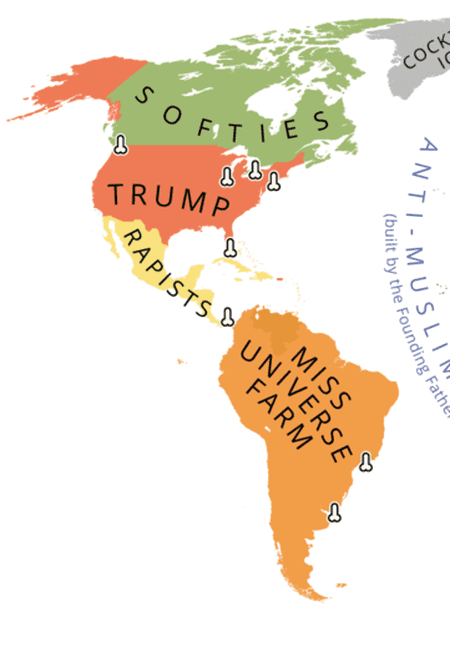 His scathing criticism didn’t stop there, though. He continued: ‘Trump is not someone who should spend even a single night at the White House,’ he added. ‘Not even if he had too much wine after Hillary Clinton’s inauguration party.’

Love maps? Check out this awesome map that shows you how to get to over 50,000 historic attractions in the US!