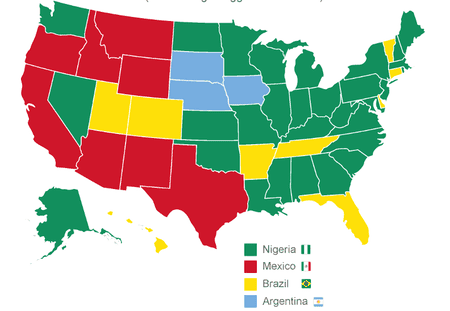 This map shows which nations Americans are tweeting about | © Sportsbetting.ag

The United States men’s national team won’t be at the 2018 FIFA World Cup in Russia, but Americans are still very much engaged with soccer’s biggest tournament. These maps break down geotagged Twitter data to show who Americans are talking about leading up to the World Cup.

We all know the United States failed to reach the 2018 FIFA World Cup. The 2-1 loss to Trinidad and Tobago on the final day of CONCACAF Hexagonal qualifying in October 2017 has haunted the dreams of supporters as the U.S. men’s national team failed to reach soccer’s biggest stage for the first time since 1986.

Despite this failure, Americans are still interested in the World Cup. U.S.-based supporters purchased the second-most tickets to this summer’s tournament in Russia, trailing just the host nation. Of the 2,403,116 tickets that have been allocated, 871,797 have gone to supporters in Russia, while Americans purchased 88,825. This is ahead of the likes of Brazil (72,512), Colombia (65,234), and Germany (62,541).

Not only are Americans planning on attending the World Cup, they’re also still talking about it as if the USMNT was participating. The folks at Sportsbetting.ag compiled a pair of maps based on more than 500,000 geotagged tweets around the country in the past month.

Here’s who Americans are talking about ahead of the 2018 World Cup: 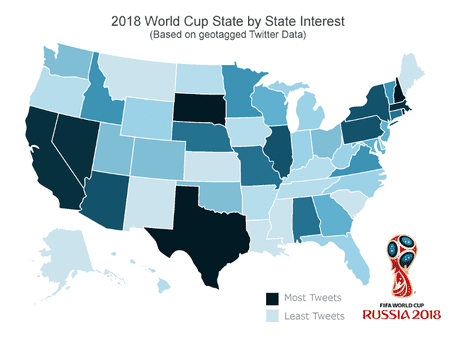 A breakdown of which states are the most interested in the FIFA World Cup | © Sportsbetting.ag

The most state-specific interest in the World Cup has come from Texas ahead of the latest tournament. Fans in Rhode Island, New Hampshire, California, South Dakota, and Nevada are also looking forward to the tournament, while people in states including Alaska, Louisiana, New Mexico, Montana, and Maine are focused on other things this summer.

Breaking the data down further, we can see what Americans are specifically tweeting about when they mention the 2018 World Cup. Unfortunately, it’s not excitement about their home team’s expectations.

This map shows which nations Americans are tweeting about | © Sportsbetting.ag

Who would have guessed Nigeria would be America’s back-up team for the World Cup? OK, that isn’t necessarily true, but the data certainly makes it seem that way. Nigeria dominated tweets in the United States when it pertained to the World Cup following Nike’s release of the African nation’s new jersey. The retro-style jersey took social media by storm and sold out within three hours of its release.

Mexico, the United States’ soccer rivals, is the second-most popular nation being talked about in the country as many pundits and even former USMNT players, including Landon Donovan, are showing their support for El Tri.

I know this isn’t popular but I do find myself rooting for Mexico, Costa Rica and Panama during the World Cup this summer. In the big picture, CONCACAF teams doing well benefits all of us. RIP my comments 🤦🏻‍♂️

Perennial favorites Brazil and Argentina, led by respective talismans Neymar and Lionel Messi, round out the top-four countries being talked about by American supporters. Neymar recently returned to training as Brazil strive for a record sixth FIFA World Cup trophy, and Messi looks to further cement his legacy as the G.O.A.T. with an elusive World Cup victory.