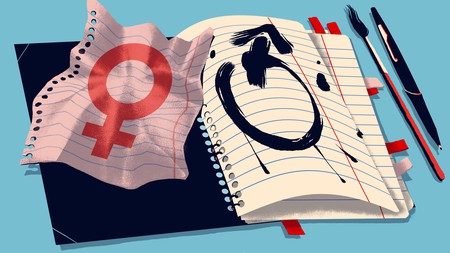 The first electronic computer was programmed by women; today’s Wi-Fi and Bluetooth are the product of an actress’s innovations in radio technology; and the first men on the moon landed safely back on Earth thanks in part to a female colleague’s calculations. If these achievements don’t sound familiar, it may be because for many years the works of these female visionaries have been wrongly credited to men.

The incorrect attribution of female scientists’ achievements to their male colleagues is so widespread that it has a name: the Matilda effect. And the numbers reflect this too: 51 women have won Nobel Prizes (in all categories) compared with 853 men. But it’s not just chemists, physicists and biologists whose work has been dismissed by societal bias – throughout history, it has been assumed that the work of many female artists, architects, inventors and more must have been done by male colleagues or even the women’s husbands. Meet eight boundary-pushing women whose work was once wrongly attributed to men in their orbits.

In the 1960s Walter Keane became famous for his “Big Eye” paintings, which were characterised by the oversize eyes of the artworks’ subjects. While Keane’s formulaic creations were derided by some as kitsch, they were hugely popular and were even considered for the 1964 World’s Fair.

In 1970, Walter Keane’s ex-wife, Margaret (born 1927), explained on a radio broadcast that she was the real painter behind the Big Eyes series. When the former couple were challenged to a paint-off in Union Square, Walter did not attend. In 1986, Margaret took Walter to court, where they were again challenged to create a Big Eyes painting. Walter refused to take part, blaming an injured shoulder, while Margaret painted an identical image in under an hour, and was awarded $4 million in damages. Margaret explained in a later interview: “After I married Walter I just signed my paintings ‘Keane’. He was able to take credit for my work, which I was not aware he was doing at first.” Even after Margaret discovered his deception, she did not question him for many years for fear of his reaction – “I was afraid for my life” – and even began to support his claim in public. Now, Margaret has finally received the credit she deserves and is internationally acclaimed for her artwork, and her story has even inspired a Hollywood movie, Tim Burton’s film Big Eyes (2014).

Lizzie Magie (1866-1948) was a supporter of Georgism, an economic philosophy that proposes that the profits of all work on the land should be shared throughout society. In the 1900s, Magie designed The Landlord’s Game to help demonstrate her belief. The game had a square board, fake money and a “Go to jail” square. It was played in two rounds: in the first, “anti-monopolist”, when players bought land, the profits were shared equally. In the second, “monopolist”, the aim was for players to work individually to make as much money as possible and bankrupt their rivals.

The Landlord’s Game became so popular with Magie’s friends that she applied for a patent in 1903. It continued to spread throughout society and was soon fashionable at universities and in left-wing circles, with individuals often creating their own iterations. After playing the game himself, heater salesman Charles Darrow adapted the idea and added coloured neighbourhoods and simple illustrations. He sold the game, which he called Monopoly, to the Parker Brothers in 1935 and became the first board-game millionaire.

For many years Monopoly was solely attributed to Darrow, and the creation story was even printed in the game’s instruction booklet, stating: “In 1934, Charles B. Darrow of Germantown, Pennsylvania, presented a game called MONOPOLY to the executives of Parker Brothers … It was the game’s exciting promise of fame and fortune that initially prompted Darrow to produce this game on his own.” Magie was not credited as Monopoly’s creator during her lifetime, and today, the original message of the game is all but lost.

In the 1950s, Katherine Johnson (born 1918) worked alongside other women analysing data and performing complex mathematical calculations for NASA (then NACA). Johnson has described her early role as a “computer [who] wore a skirt”, and when she was temporarily reassigned to a flight-research team in 1953, she was the first woman, and also the first person of colour, to join the all-male team. Her proficiency meant that the role was soon made permanent, and she broke down both racial and gender barriers by ensuring that she was included in meetings to which women had never been invited before.

But much of Johnson’s work went uncredited, as women were not allowed to put their names on reports. The first time that Johnson’s name featured on her work was when she completed a report on behalf of a colleague, and the team was left with “no choice,” Johnson said. “I finished the report and my name went on it, and that was the first time a woman in our division had her name on something.” Later, Johnson calculated the trajectories for the first American in space and Apollo 11, plus many more key projections during the space race. Perhaps most indicative of her importance to NASA in the 20th century was astronaut John Glenn’s request that Johnson check the computer calculations before his first orbit around Earth. Johnson and her female, African American NASA colleagues are featured in the 2016 film Hidden Figures, based on the book of the same name.

Arguably the most famous 19th-century female inventor, Margaret Knight (1838-1914) tinkered with creations from a young age, and her first significant invention came when she was a teenager employed at a textile mill. When a shuttle holding yarn flew off one of the looms in the factory and injured a colleague, Knight was inspired to work out a way to cover the shuttle and avoid another incident. Although the resulting invention worked and was copied by many factories, Knight did not file for a patent so she was never compensated.

More significantly, in the late 1860s Knight began to work at the Columbia Paper Bag Company, where she invented a machine to create flat-bottomed paper bags, a style that is still in use today. (Prior to this, paper bags had been similar in style to envelopes.) But her idea was stolen and patented by Charles Annan, who was in the factory when the machine was built. Knight challenged Annan with a lawsuit, and in 1871 she was awarded the patent. In fact, Knight filed a total of 27 patents, but she didn’t receive due credit or compensation during her lifetime. In the local obituary after her death, Knight’s inventions were once again eclipsed by a man, as she was described as the “woman Edison”.

In 2018, Denise Scott Brown (born 1931) was awarded the Soane Medal for the “global influence” of her contribution to architecture. This individual recognition lies in stark contrast to the 1991 Pritzker Architecture Prize, which was awarded to Scott Brown’s husband, Robert Venturi, for work on which they had collaborated equally. Scott Brown did not attend the presentation, and when the organisation was challenged on its decision, it claimed that the award could be given only to a single person – only for it to emerge that in 1988 two men had received the prize jointly. But Scott Brown’s name has still been left off the award, and as recently as 2013 a petition to retroactively award her the prize was rejected.

Despite being a co-partner in their architecture firm, Scott Brown found that her work alongside her husband was often attributed to him alone, and she has been open about her struggles with sexism throughout her career. The architect’s essay “Room at the Top? Sexism and the Star System in Architecture” (1989) discusses the difficulties she faced achieving recognition as a woman in the male-dominated field. She continues to be an active campaigner for equality in architecture and is now considered to be one of the leading architects of the 20th century.

The Austrian-American actress Hedy Lamarr (1914-2000) was often described as the most beautiful woman in the world and is best remembered for her Hollywood film appearances. But she was also a keen inventor, and her discovery of “frequency hopping” is arguably her most significant achievement.

Lamarr spent much of her downtime between filming working on new ideas in her trailer or at home. She helped streamline her lover Howard Hughes’s square-shaped airplane wings by studying books on birds and fish, and she also proposed an improved traffic-light design. During World War II, Lamarr concentrated on supporting the Allied effort through her inventions. At the time, torpedoes were controlled by radio waves, which were often infiltrated by the enemy to set them off course. Lamarr had the idea that a signal could hop across frequencies in order to avoid being tampered with.

But Lamarr didn’t have any formal training, so she decided to collaborate with the inventor and composer George Antheil. The “hopping frequency” that Lamarr came up with is the precursor of today’s secure Wi-Fi, GPS and Bluetooth connections. Lamarr received a patent alongside Antheil, but although it was later used by the military, she did not receive sufficient credit for her invention during her lifetime. And when Lamarr wanted to join the National Inventors Council, she was told that her time would be better spent as a pinup selling war bonds. But as she commented towards the end of her life, “The brains of people are more interesting than the looks I think.”

In 1946, six women worked together to build the first ever completely electronic, programmable computer. Kathleen Antonelli, Jean Bartik, Frances “Betty” Holberton, Marlyn Meltzer, Frances Spence and Ruth Teitelbaum were tasked with programming the ENIAC (Electronic Integrator and Computer) for the US Army by the University of Pennsylvania’s Moore School of Electrical Engineering. The computer would be used in the ongoing World War II to work out artillery trajectories. However, the project was top secret, and the identities of the women who had programmed the computer were not revealed.

The six female programmers continued to be uncredited for their work until the 1980s, when Harvard student Kathy Kleiman stumbled upon a photo of the women with the computer in question while researching a thesis on early programmers and software developers. Kleiman enquired about the image but was told that the women were models who were only in the photo in order to make it more appealing. Delving further, she discovered that the women had long gone uncredited for their work, despite continuing to contribute to the ENIAC after the war, and launched the ENIAC Programmers Project to tell their story. Now, they are credited with pioneering programming, and also with helping to make programming itself easier for future generations.

Only the second woman to graduate from the Massachusetts Institute of Technology, Marion Mahony Griffin (1871-1961) became the first licensed female architect in Illinois. In 1895, she was the first employee to be hired by soon-to-be-famous American architect Frank Lloyd Wright and worked closely with him for 15 years, helping to develop the American Prairie School of architectural style. She was particularly talented at architectural drawings, and the watercolour delineators that she created became a well-known symbol of Frank Lloyd Wright’s work.

Mahony went on to marry architect Walter Burley Griffin, and the pair collaborated on numerous projects, including a design for Australia’s new capital city, Canberra. It’s thought that Mahony’s stunning watercolours won them the competition to take on the commission, but the design has often been solely attributed to her husband. But while Mahony’s work was often overshadowed by that of her male colleagues during her lifetime, her wide-reaching influence is now celebrated through the Australian Institute of Architects’ Marion Mahony Griffin Prize, which is awarded exclusively to female architects.