The Weirdest Virtual Reality Experiences Ever Made 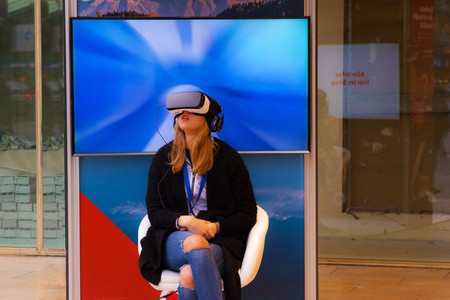 Virtual reality has the potential to get really weird, really quickly.

Virtual reality technology can take you anywhere. And sometimes that means going to weird places.

“I’ve seen things you people wouldn’t believe,” said Roy Batty, the villainous android of Ridley Scott’s Blade Runner, in the epic conclusion to the movie. “Attack ships on fire off the shoulder of Orion. I watched c-beams glitter in the dark near the Tannhäuser Gate.”

Want to pretend you’ve been reincarnated as a forest-dwelling animal? You can with Marshmallow Laser Feast’s virtual reality helmets that let you see how a forest would look if you were a dragonfly, an owl, or a frog.

The difference in perspectives isn’t just a matter of height, as some animals view the world in completely different ways than humans. For example, we see in three color wavelengths, while dragonflies see the world through 12, meaning they have ultra-multicolor vision.

The design studio’s project is currently being showcased at the Playgrounds Festival in the Netherlands, and was recently in England’s Grizedale forest. Check out a promo for the virtual reality helmets below.

It’s the classic tale: two strange looking humanoids, one blue, one orange – both naked – meet. They then share their passion for blowing glitter from their butts. Tyler Hurd made the original short animated film and with a little help from VR experts at Skillman & Hackett, made the Butts experience immersive.

“BUTTS: The VR Experience will make you laugh, cry, fill you with unimaginable bliss, and return you to that innocent place of childlike wonder you’ve long forgotten,” the website of the production says. Check out the original video below and find the VR version here, and have your headset ready.

Travel Through a Human Body

The Body VR takes users inside the human body, lets them travel through the bloodstream, enter living cells and much more. The educational virtual reality platform is aimed at teaching children the inner workings of the human body.

Learn more in the video below.

Make Out with Aliens

This is an oldie, but a really weird entry. The Alien Makeout Simulator is a game that puts you in the shoes (do aliens wear shoes?) of one alien, and challenges you to make out with another many-mouthed being from another planet. Footage of the truly bizarre game is in the video below.

The Chernobyl VR project lets you take a walk through the Exclusion Zone of Chernobyl, Geiger meter in hand to check the radiation levels. The game tells the stories of the people who suffered from the nuclear catastrophe. The developers took 3D rendered photogrammetric scans of locations and buildings to build the game. Check out the 360-degree “making of” video.