The USA's 10 Most Spectacular Outdoor Artworks 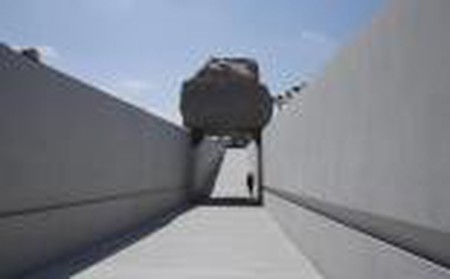 From precariously balanced boulders to rows upon rows of laser cut metal human figures, outdoor artwork in the USA is as provocative and striking as any masterpiece in a fine art museum. For fans of art and nature alike, the following examples of outdoor artworks will undoubtedly change the way you think about your environment and what we consider to be ‘art’. 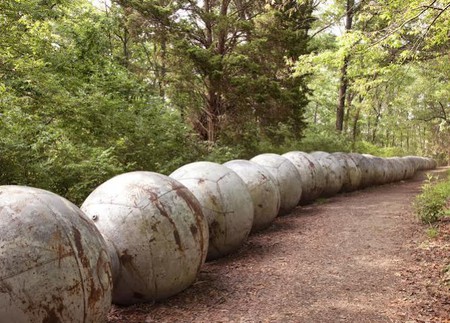 Museum, Park
Facebook
Email
Twitter
Pinterest
Copy link
Share
Map View
Donald Lipski’s ‘Ball? Ball! Wall? Wall!’ is comprised of 52 steel buoys, reclaimed from the sea and placed neatly in a row in the Children’s Sculpture Garden of Laumeier Sculpture Park. Playing with elements of surrealism, whereby ordinary objects take on unexpected meanings, Lipski’s piece simultaneously encourages association with a string of pearls, a kinetic desk toy and an industrial junk site. The ongoing rusting only adds to the interest created by this piece. Lipski’s artistic vision is grounded in his interest in the linkages between reality and play, making for a truly unique artistic experience.
Open In Google Maps
12580 Rott Road, St. Louis, Missouri, 63127, USA
+13146155278
Visit Website
Give us feedback

Canadian landscape artist Claude Cormier’s ‘Blue Tree’ installation was unfortunately removed in 2007 for safety reasons. However, its legacy lives on in its story. In 2004, this tree was infected with a disease and was due to be felled. Cormier gallantly stepped in and in lieu of instant death, gave the tree a three year sending off that involved a cherry picker and 75,000 blue Christmas ornaments. Wildly fantastical and reminiscent of a world fit only for Dr. Seuss, Cormier’s ‘Blue Tree’ will forever live on in photographs and the memories of those lucky enough to have seen it up close.

Approaching the green outside Lawrence Hall – the Williams College’s artistic centre – it is easy to feel as though you are being watched. Four pairs of eyes and one ‘eye to rule them all’ are set into the slopes so naturally that the earth surrounding these sculptures appears to have shaped itself in reaction to their presence. For Bourgeois, her sculpted eyes, ‘relate to seduction, flirtation, and voyeurism’. Ranging in size from three to six feet high, the eyes are interactive in every sense. You are encouraged to sit, climb, or simply contemplate what you, or they, are looking at. In addition to providing a confrontational staring contest, the eyes remind the viewer to keep their own eyes open always, to be aware of all surroundings and to appreciate what can be seen.
Open In Google Maps
15 Lawrence Hall Drive, Williamstown, Williamstown, Massachusetts, 1267, USA
+14135972429
Visit Website
Give us feedback

Museum, Park
Facebook
Email
Twitter
Pinterest
Copy link
Share
Map View
‘Levitated Mass’ is as the title suggests – a floating mass. Comprising of a 340-ton granite megalith placed precariously atop a 465-foot long walkway, ‘Levitated Mass’ is a true sculptural marvel. The structure references the ancient history of megalithic sculptures and also the ingenuity of modern design structure. Michael Heizer is known for his large-scale installations that involve the quarrying and transportation of boulders á la the construction of the Ancient Pyramids. Heizer notes that, ‘the Egyptians didn’t have rubber tires or diesel engines, but they also didn’t have weak streets’.
Open In Google Maps
5905 Wilshire Boulevard, Central LA, Los Angeles, California, 90036, USA
+13238576000
Visit Website
Give us feedback

Cornerstone Gardens is renowned for showcasing cutting edge landscape design. Who better to exhibit therefore, than Andy Cao and Xavier Perror, a French-American duo who have been blurring the lines between art and landscape for years. Cao and Perror’s understanding of the way that the eye perceives a given environment enables aesthetical manipulations at once both delicate and dramatic. Inspiration is drawn from disparate and international sources. ‘Lullaby Garden’ was inspired by the 19th century Japanese artist, Hokusai. Hokusai is best known for his series of woodblock prints, Thirty-six views of Mount Fuji (c. 1831) and in the Lullaby Garden one can spot undulating of form and tranquillity of spirit.

Museum, Park
Facebook
Email
Twitter
Pinterest
Copy link
Share
Map View
Roxy Paine created ‘Maelstrom’ for the Metropolitan Museum of Art’s Iris and B. Gerald Cantor Roof Garden. The structure was 130 feet long and 45 feet wide, a stainless steel monument to the durability of nature. Her installation was intended not to be viewed in isolation, but to be seen against the backdrop of New York City. With installations such as ‘Maelstrom’, Payne seeks to explore the inevitable dialogues that take place between the natural and built-up environments.
Open In Google Maps
New York City, New York, USA
Give us feedback 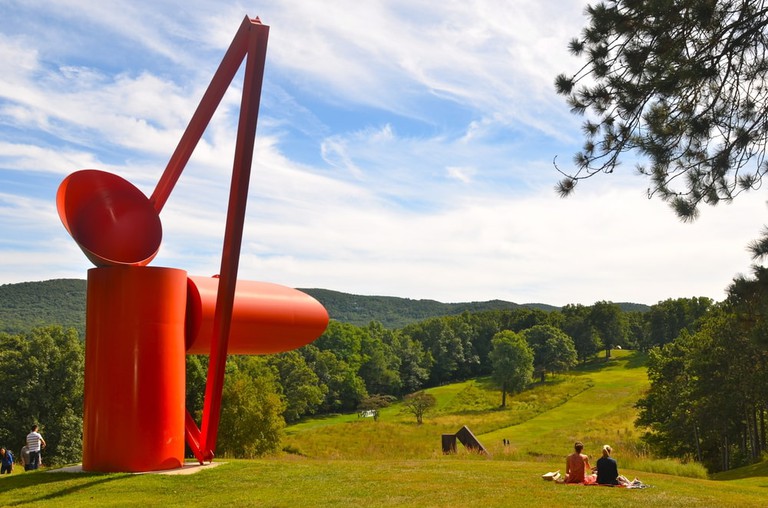 Storm King Art Center | © Victoria Lipov / Shutterstock
Isamu Noguchi’s sculptural work, Momo Taro (literally, ‘peach son’) sits proudly atop a hill, inviting its viewers to touch the smooth granite and sit in quiet contemplation or hide in its hollow enclave. After receiving a commission from the Storm King Art Centre to produce this piece, Noguchi returned home to Japan in search of the perfect stone. Near his home village, lying in a remote stream, he came across a boulder too perfect to be forgotten yet too large to be carried away. As a result the boulder was split, immediately resulting in Noguchi’s recollection of the tale of the peach son, the boy who was born in a peach pit. Noguchi wanted his work to be as interactive as possible and it is refreshing to find such an inviting piece in the middle of the sculpture park. Noguchi intended for viewers of his work to climb inside the pit and meditate on the reverberations of the universe, encapsulated by the Buddhist ‘Om’.
Open In Google Maps
1 Museum Road, New Windsor, New York, 12553, USA
+18455343115
Visit Website
Give us feedback

Park, Museum
Facebook
Email
Twitter
Pinterest
Copy link
Share
Map View
At Greenwood Park and John and Mary Pappajohn Sculpture Park, it is possible to idle away the hours underneath Jaume Piensa’s giant gleaming white enamel torso known as, ‘Nomade’. ‘Nomade’ is comprised of letters in the way that the body is comprised of arteries, enabling the city to be viewed through the gaps and the letters to be played with at leisure. The sculpture arrived in the park in 2006, after the Pappajohns caught sight of it at the Musée Picasso on the French Riviera and insisted they take it home.
Open In Google Maps
1330 Grand Avenue, Downtown Des Moines, Des Moines, Iowa, 50309, USA
+15152371386
Visit Website
Give us feedback

Rows and rows of people, arms outstretched, all in red – this is what you see when you arrive at Kentuck Knob’s Sculpture Garden and approach Ray Smith’s ‘Red Army’. Weaving in and out of these two dimensional laser-cut metal figures, it is easy to get carried away and begin attributing names and stories to them. The historical references in this work are numerous but not explicit, leaving the viewer to take from it what they want. 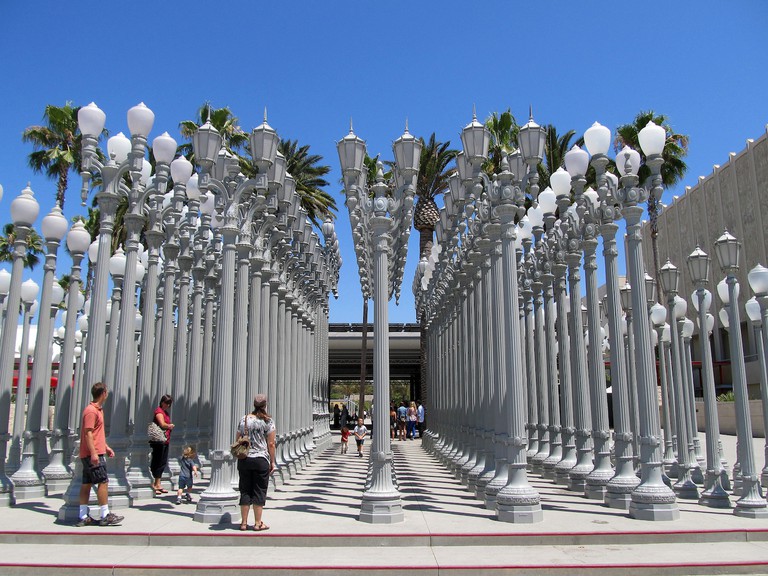 Urban Light | © daryl_mitchell / Flickr
Chris Burden’s ‘Urban Light’ is found in the Los Angeles County Museum of Art Sculpture (LACMA) Gardens. The installation is comprised of 202 restored cast iron lampposts, set at varying heights but all giving off a golden glow. Reminiscent of an exaggerated set for ‘Singing in the Rain’, the installation inspires romantic cinematic moments as well highlighting new conceptual uses for recycled material. His days of mock-crucifying himself atop VW Beetles staunchly in the past, Chris Burden’s work may no longer have the same inherent shock value, but it remains just as impressive.
Open In Google Maps
5905 Wilshire Boulevard, Central LA, Los Angeles, California, 90036, USA
+13238576000
Visit Website
Give us feedback
Give us feedback