The Universal Language of the Image: Joe Sacco’s Comics and Conflicts 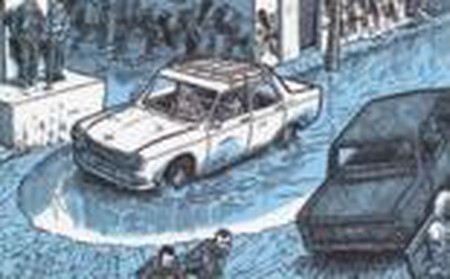 Maltese-American comic journalist Joe Sacco’s seminal works manage to be effective exercises in both story-telling and political and international journalism. In 2013, Sacco published his first wordless comic strip: The Great War. We consider four of his previous works and the stories they bring to bear on a grand historical narrative.

Joe Sacco’s ink-on-wood drawings are expressionist in style and sometimes impressionist in their process; when Sacco is not allowed to photograph an interviewee (which he asks to do every time), he simply sketches them covertly. Yet they amount to accurate depictions of everyday people and their everyday lives, which, when combined with prose, are shaped by historical (though often under-reported) events. His works are at once historical records and collections of personal vignettes. Individually, each narrative is able to transcend the historical moment; they speak of the eternal human as it is defined by chance and choices made amid a wider conflict.

‘History has to be written not just by the victors, but by the people being victimised’

Footnotes in Gaza, Palestine, Safe Area Goražde, and The Fixer are among the best known of Sacco’s oeuvre, and best represent the comic journalist’s prior concern with the human story of conflict. Having struggled with ‘detestable’ graphic design work and ‘boring’ writing jobs, Sacco found solace in drawing a Maltese romantic comic and published his early work titled Imħabba Vera. In 1988 he travelled across Europe, leading him into the Gulf War and eventually, the Middle East. He begun researching for Palestine in 1991, and published two works about Palestine in 1993 and 1996.

‘I don’t get a compulsion to do something very often,’ Sacco told the Independent, ‘but when I do I have to follow my instinct or I know I’ll regret it for the rest of my life. When the Bosnian war erupted it hit me in the gut, and I knew I had to go there because the idea of it was so alien to me.’

Sacco headed to Bosnia in 1994 at the end of the Bosnian war, a journey from which came Safe Area Goražde. He published an eight-page strip, ‘Complacency Kills’, for the Guardian in 2005; a piece which followed reservists attempting to keep the road between Haditha and Hit clear for US convoys during the Iraq War.

Placing himself into his work, Sacco conducts and draws himself as a journalist. Whilst he draws himself in search of the ‘story’ and voices his concern when there is a lack of ‘action’, Sacco arranges his comics as a novelist, who enters into his subject’s narrative, paces the roads they describe, and draws out his interviewees’ personal history, dwelling upon their complaints. Story-telling is as important, if not more so, than the experiences of Sacco himself.

A standout attribute of Sacco’s work is the way he ‘lays it out’, portraying an honesty which attempts to defy the tactics of US media dealing with Israel and Palestine. Whilst discussing a Palestinian man who appears in Footnotes in Gaza, Sacco speaks of the dilemma of portraying his personality. The man ‘has this soft thing for the animal (being butchered). He couldn’t bring himself to eat from it. However, he isn’t averse to the idea of suicide bombing and killing Israeli civilians.’

Sacco’s penchant for ambiguity and conflict (both external and internal) places him on a par with the greatest reporters of international politics and the greatest writers of the human psyche. 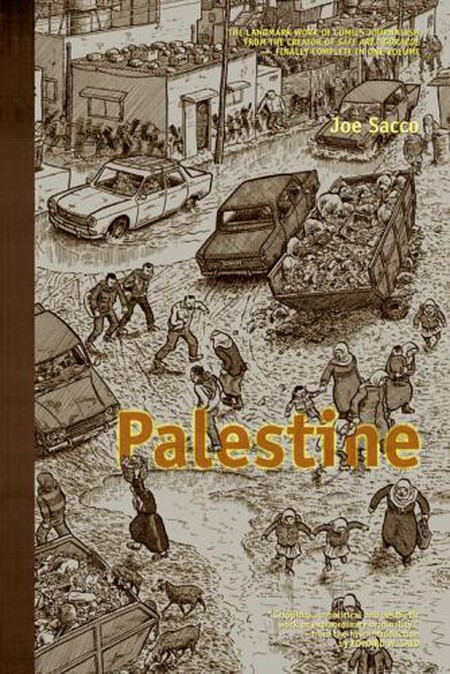 Between 1991 and 1992, Sacco spent two months in Gaza and the West Bank (otherwise known as the Occupied Territories) and some time in Israel. In an interview published in Al Jazeera, Sacco relates how he was inclined to explore Palestine, having realised the prominent Israeli bias in American media, and his subsequent ignorance on the nature of the conflict.

His primary landscape is the occupied territories situated on the border of Israel and Palestine, characterised, according to Sacco’s comic, by waterlogged paths, roughly-hewn houses and wire fences. It is inhabited by Palestinian families and attendant armed forces. Sacco’s narrative is made up of interviews with the residents, whose stories hark back to the beginning of the Intifada and the Gulf War. True to his process, Sacco presents a narrative as time-bending and as subjective as the human memories which dictate it.

Palestine is as much about Sacco as a journalist and a creative as much as it is about the residents of the Occupied Territories. In keeping with his ethos of ‘laying it out’ the author does not attempt to remove himself from the narrative of Palestine. He draws himself into the text (he cuts a figure, which, he admits, is the only one which hasn’t been updated as his style has developed) as an interviewer searching for a useable story, and, perhaps more importantly, as a journalist looking for the ‘new’. 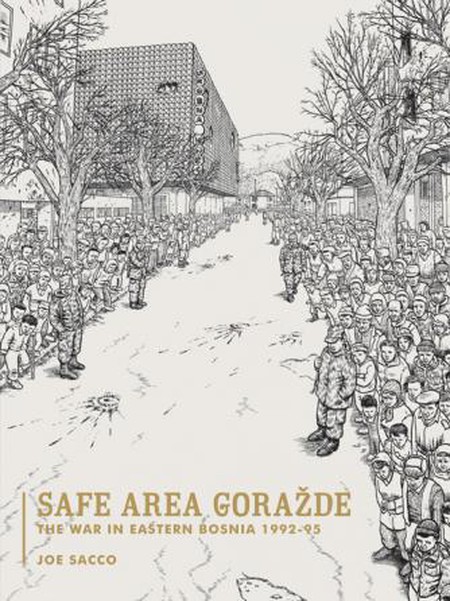 Referring to the UN deeming of the Bosnian enclave in Serb-dominated territory Goražde a ‘safe area’, prior to a murderous Serb offensive, Sacco ironically welcomes the reader into the horrendous and complex Yugoslav War.

In four months between 1994 and 1995, Sacco interviewed and followed residents living in Goražde. The resulting work, Safe Area Goražde, focuses on the lives of around half a dozen people, who lived surrounded by hostile communities and army forces, in relative isolation from the international community. Not even the deaths of 700 citizens was sufficient to raise immediate alarm. Their suffering is recounted to Sacco in personal interviews, who connects the private histories of his interviewees with a political narrative; he moves from a cousin’s burning house, which has been squatted in by Serbian armed forces, to Lieutenant General Rose, the UN’s top military commander in Bosnia, telling the international community that ‘The situation was a lot better than I had been led to believe.’

When Sacco re-visits the area a year later, the enclave has undergone an immense change. Roads are no longer only for the UN, aid workers and journalists, and global commerce has reached the community. In spite of these visions of development, the trauma of the community is still marked.

Unique among his oeuvre is Sacco’s The Fixer: a comic with a greater inclination towards the novel-form than Palestine and Safe Area Goražde. Focusing his narrative on the memories and present-day life of a single, primary subject, Sacco attempts to penetrate the character of Bosnian army veteran Neven.

Neven’s character is realised against the backdrop of post-Yugoslav War Bosnia, to which Sacco returned in 2001. Here, paramilitary warlords, of whom Neven is one, reminisce about the role they played (or perceived they played) in battles and political conflicts, whilst others do their best to move on with their lives and survive in contemporary Bosnia.

The complexity of Neven’s position in the war is related by the apparently nervy, but acutely sensitive Sacco, whose prose and drawings, and the interaction between them, shine a light on the limitations and ambiguities of Neven’s narrative. For all its stylistic differences, the questions Sacco is posing in The Fixer are not unlike that of Palestine and Safe Area Goražde: what is the nature of the relationship between memory, the ‘grand historical narrative’, factual past and lived experience, and how truthful can we be when we construct a history?

Having spent large amounts of time researching, writing and drawing about Palestine and the Occupied Territories, it is no surprise that Sacco came up against historical episodes which stretched beyond the capacity of a single comic. Footnotes in Gaza is Sacco’s exploration of memories which reach into the Suez crisis of 1956 and the two massacres of Palestinian citizens which occurred during it.

Footnotes in Gaza places 1956 and contemporary Gaza in parallel with one another. Depicting the contemporary Palestinians’ situations and motivations, Sacco engenders in his reader a desire to know ‘why’ and ‘how’; the same questions Sacco himself faced on visiting Gaza and the West Bank. 1956 Gaza does not answer the questions, but surely proves itself a useful reference point in the history of the Palestinian/Israeli conflict. The comic relates the memories of Palestinians who recall the murder of 275 Palestinian citizens at Khan Younis, and the 111 who died in Rafah, where people were summoned to a school, picked out and murdered according to the relatively limited judgement of Israeli soldiers, who decided whether they were guerillas or soldiers.

Such episodes, for Sacco, are ‘like innumerable historical tragedies over the ages that barely rate footnote status in the broad sweep of history — even though […] they often contain the seeds of the grief and anger that shape present-day events.’