The Unexpected Connection Between the Korean and Cherokee Languages 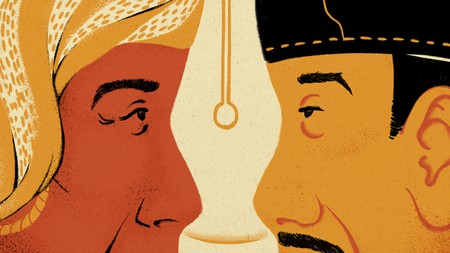 With an ocean of distance between them, the Cherokee and Korean languages may seem to have nothing in common, but in each case the written language was created by a single individual.

Language is a foundational element of all human cultures, and written languages can become a strong symbol of cultural identity as well as an invaluable communication tool across distances. Not every culture has a written language, though the idea of creating one is often sparked through cultural exchange.

Languages are usually built by communities; rarely does a single person create a unifying language used every day by an entire people. But that’s exactly what occurred when it comes to the Korean and Cherokee written languages.

Korean and Cherokee cultures both have histories marred by invasion and occupation, and the development of an alphabet was used to confront oppressive colonization and safeguard cultural identity. These scripts provided an element of unity for individuals and acted as a means of record keeping.

The king behind the written Korean language

Until 1443, Koreans used complex Chinese characters to write because of their proximity of the Chinese Empire, but the differences between the Chinese and Korean languages meant that this system did not adequately cover the needs of the Korean people. Venerated King Sejong the Great, who reigned over Korea from 1418 to 1450, saw a need for a distinct, singular Korean written language and developed Hangul. Legend says King Sejong nearly lost his sight developing the language, though it is likely he did not take it on as a solo endeavor. As king, Sejong would have had access to scholars and literature about language to base his work on.

King Sejong developed Hangul to be easily understood, as each shape indicates a different sound, or phoneme. Each character is built out of its individual sounds, meaning that every word can be sounded out, if you know what each symbol means. As King Sejong said of the characters, “A wise man can acquaint himself with them before the morning is over; a stupid man can learn them in the space of 10 days.” A basic understanding of the forms means that someone could read and pronounce Korean without actually understanding any of the language. The ease of this system has resulted in a nearly 100% literacy rate in both South and North Korea.

At first, Hangul was not widely adopted, as Chinese scripts retained prestige, but recent decades of increased national pride have resulted in a pride in the language. The Chinese writing system was still in use in all official documents until 1894; then Hangul was outlawed while Korea was under Japanese occupation, which began in 1910 and ended with the end of World War II in 1945. During that time, Japanese was the official language of the region.

After WWII, Korea was split; North Korea became a Communist country, and South Korea became Capitalist, causing a rift between the nations that persists today. Both North and South Korea now use Hangul as the official written language, although the use of the Chinese characters persists as well. Today, Hangul provides a point of unity across a contentious border. Koreans still express gratitude to King Sejong for his efforts in bringing forth Hangul to his people.

The Cherokee man charged with witchcraft for creating an alphabet

The Cherokee alphabet is one of the youngest in the world, created in the early 19th century by one man named Sequoyah. He was born in the 1760s or ’70s near Echota, the capital of the old Cherokee Nation and part of what is now the state of Tennessee in the United States. He was born with some form of disability that made walking and physical labor difficult. He worked for many years as a trader which put him in frequent contact with non-Native people. The Cherokee (or as they refer to themselves: Tsalagi) people did not have a written language and often viewed the method Europeans were using to communicate with suspicion, but Sequoyah saw its benefits and began to piece together how it worked.

Much of the history of Native people in the Americas is related to a narrative of trying to “civilize” them. European missionaries aimed to convert Native people to Christianity and to educate them away from their traditional religious and cultural practices. Lawmakers in the new nation of the United States of America saw Native people as a problem that could only be solved by getting rid of them or integrating them into European culture. Among Sequoyah’s many reasons for an interest in written language was a desire to show non-Natives that the Cherokee were already civilized and capable of taking part in their society without giving up their heritage.

Sequoyah decided that his people should also have an alphabet. When sitting down to construct his own version, he made several attempts before landing on a syllabary as the simplest method; each symbol stands for one syllable in the Cherokee language. English puts together letters to make a sound, such as “th” or “sh”; Cherokee has one letter for each sound in the language. This made the language easy to learn because it directly mirrored Tsalagi Gawonihisdi, the spoken language of the Cherokee people.

Unlike King Sejong, Sequoyah created his alphabet without the help of scholars or funding. Within a few months of completing his work in 1821, he was able to teach this new written language to his daughter, A-Yo-Ka, and her husband.

As word got out about what Sequoyah was crafting, he and his daughter were charged with sorcery under Cherokee law and put on trial. To prove themselves innocent, the two were forced to send correspondence to each other until the warriors administering the trial were satisfied that the written symbols passed between the two constituted “talking.” The warriors were so impressed that they asked to be taught the language, and within a week, they were all able to read and write in their native language.

Literacy quickly spread, and soon the Cherokee Nation had a printing press releasing newspapers, hymn books, Bibles and more. While the American government did see this language as a “civilizing” force, it was not enough to exempt the Cherokee from the same treatment all Native people received in the 1800s. Through treaties and legislation, Native people were forced off their land and pushed west. Beginning in 1830, President Andrew Jackson drove the Cherokee and other Native tribes toward Oklahoma. The enactment of this policy came to be known as the Trail of Tears. Sequoyah had already moved to Oklahoma in 1829.

The Cherokee language, both written and spoken, was almost wiped out between 1870 and the 1950s, when Cherokee children were removed from their homes and parents by law and sent to boarding schools to be educated with European-derived values, with the intent to wipe out Native cultures. Today, only about 5 percent of Cherokee children are raised bilingual in English and Cherokee. UNESCO considers Cherokee to be an endangered language. But there are ongoing efforts to teach adults Cherokee, and the wealth of documentation of the language has helped to reconstruct and preserve the language for future generations.

When admiring Sequoyah’s contributions, Senator Sam Houston, the first Senator from the newly formed state of Texas, stated, “Your invention of the alphabet is worth more to your people than two bags full of gold in the hands of every Cherokee.”