The Top 10 Western Movies Of All Time

No other genre of film is as grounded in American culture as the western. However, the western has spread to all parts of the world, and credit is due to the likes of Italian director Sergio Leone for his masterpiece contributions. Here we cover the 10 essential western movies that any fan of American and Italian cinema should make time to watch. 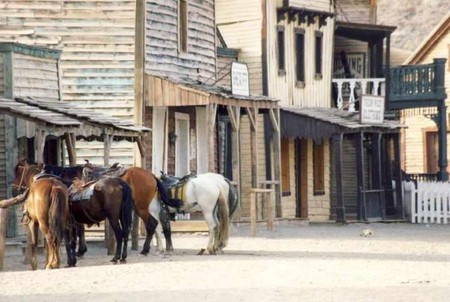 Once Upon a Time in The West is a great starting point for explorations in the western film genre. This film, directed by father of the spaghetti western sub-genre, Sergio Leone, was one of the last great films he created, casting the likes of Henry Fonda and Charles Bronson as mortal enemies. Once Upon a Time in The West tells the tale of Flagstone, a typical western boomtown, and the cherished land nearby, named Sweetwater, which is the town’s only water source. A contest for the possession of Sweetwater between a railroad company and the land owners is the backbone of the tale, pitting amoral and ambitious big business and its bands of unruly henchmen against a rugged and unexpected hero of the people.

The Assassination of Jesse James by the Coward Robert Ford (2007)

This 2007 release is a dramatized version of the death of Jesse James at the hands of his his fellow gang member, Robert Ford. The Assassination of Jesse James by the Coward Robert Ford is, indeed, a title that says it all, yet tells nothing of the complex relationships and power struggles that lead up to that fateful shot. Starring Brad Pitt and a wonderful Casey Affleck as Jesse James and Robert Ford respectively, this film marked something of a revival for the western genre in the 2000’s, combining the elusive strands of notoriety and celebrity, tall tale and raw humanity to produce an art-house and thoroughly thrilling piece of work.

A famed remake of the Japanese classic Seven Samurai (1954), The Magnificent Seven still stands as one of the greatest westerns ever made. With a celebrity cast including the likes of Yul Brynner, Eli Wallach and Steve McQueen this film was an extraordinary release for its time. To defend a small border village from Mexican marauders, seven gunmen are hired to teach the villagers how to defend themselves, while laying trap after trap for when the raiders return. It’s hardly a surprise that The Magnificent Seven is the second most shown film in US television history; its non-stop action and celebrity cast continue to entertain viewers both old and new.

No other director besides Sergio Leone could have possibly made such a film as this; his magnum opus and masterpiece, The Good, The Bad & The Ugly. The plot is woven from three interweaving and titular characters: Blondie, aka The Good, played by Clint Eastwood, Angel Eyes, aka The Bad, played by Lee Van Cleef, and The Rat, aka The Ugly, played by Eli Wallach. All three men are pitted against each other in some of the most thrilling and spectacular scenes the western genre had ever scene, while the plot mixes a psuedo prisoner’s dilemma with a stark dose of western reality, grittiness and the travails of the Civil War to create something truly unforgettable. (It’s hardly surprising Quentin Tarantino hails this as the finest film ever made)

Starring Clint Eastwood, Gene Hackman and Morgan Freeman, it’s easy for any film to achieve blockbuster status. Eastwood’s Unforgiven tells the story of a bounty set on two cowboys for their misconduct with a prostitute, and the crookedness of the Big Whiskey sheriff, Little Bill Dagget (Hackman). Eastwood plays the experienced gunman out for one more bounty hunt, set with a vengeance only Eastwood himself can embody. Unforgiven is unanimously the best western to come out of the relatively dry 1990s, and an indubitable classic at that.

High Noon is the western that made the genre in the 1950s and 60s. Starring Gary Cooper as Will Kane, marshal of Hadleyville, and Grace Kelly as Amy Fowler, his new wife and devout Quaker, this film tangles with the engagements of the pair, and the man’s reputation in town. After the unexpected pardon of a criminal in court, a man calls for revenge on Kane, and teams up with the rest of his gang to scare the marshal out of town. However, he doesn’t budge, turning the film into an epic four-on-one shootout that was to influence the likes of Wyatt Earp (1994), John Wayne and Eastwood to come.

Quentin Tarantino’s Django Unchained is renditioned in the dramatic spaghetti western style, decked out with the director’s signature violence and gore. Jamie Foxx stars as Django, a freed slave turned mercenary, who, in league with his meticulous and endearing partner, Dr. King Schultz (played magnificently by Christoph Waltz), goes in search of his long lost wife whilst taking revenge on outlaws and ruffians along the way. The narrative soon brings the duo in contact with slave owner Calvin Candie of the infamous Candyland (played by a suitably slimy Leonardo DiCaprio), storylines converge, gunfights ensue in grand style and Tarantino himself even makes a cameo.

The Wild Bunch follows Pike Bishop (William Holden) and his gang on one last job before retiring as aging outlaws of the land. Pushed to the brink by imposing industry and civilization on the Texas-Mexico border, the gang is opposed by a crooked Mexican general. Tenuous alliances between the Mexicans and the outlaws are formed and break down, promises are broken and weapon firing is inevitable, all in the glamorous, indelibly western style of the Hollywood Golden Age.

The final selection from Sergio Leone’s clutch of spaghetti westerns, though certainly not the least, A Fistful of Dollars stars Clint Eastwood as the man with no name, a gun-slinging hero deft with a pistol and even defter with his laconic utterances. As the first of the famous director’s western films, A Fistful of Dollars stands out for its dramatic use of widescreen, well shot fight scenes and its “man from nowhere” protagonist, reminiscent of the neo-realism that was popular in Italian cinema at the time.

Pale Rider rounds off this list in classic Clint Eastwood fashion. As the director and lead actor, Eastwood is in full artistic mastery here, and was by far the most representative face of the western film genre at the time. This movie tells of a town riddled with gun slinging thugs employed at the behest of the local mining company. The enigmatic Preacher, as Eastwood is called throughout, appears eerily and heroically just when he is needed, conflating a pseudo Gothic air with that classic, righteous, morally-impeccable American altruist archetype. Pale Rider has some of the greatest fight scenes in any western to date, which often rely on Eastwood’s characteristic poise in moments of high tension.