Male Artists And Thinkers Who Are Devoted Feminists
Delhi / Art

Male Artists And Thinkers Who Are Devoted Feminists

Campaigns like the HeForShe solidarity movement have seen waves of men in the public eye declare support for gender equality. They’re not alone. We look at 10 male artists and thinkers who have been campaigning in the name of feminism for years.
John Stoltenberg | Courtesy John Stoltenberg John Stoltenberg
American radical feminist John Stoltenberg – the widower of fellow feminist Andrea Dworkin, though both identified as gay – has been a tireless campaigner of feminism for many years. A prolific writer on gender issues, Stoltenberg is perhaps best known for his 1989 work Refusing to Be a Man: Essays on Sex and Justice, a critique on the construction of misogynistic masculinity, male sexuality and its enabling forces like pornography. One of the founders of Men Can Stop Rape – a group that seeks to mobilize men to work towards building cultures free of male violence against women – Stoltenberg initiated its My Strength is Not for Hurting campaign, a program educating young men on sexual assault prevention. 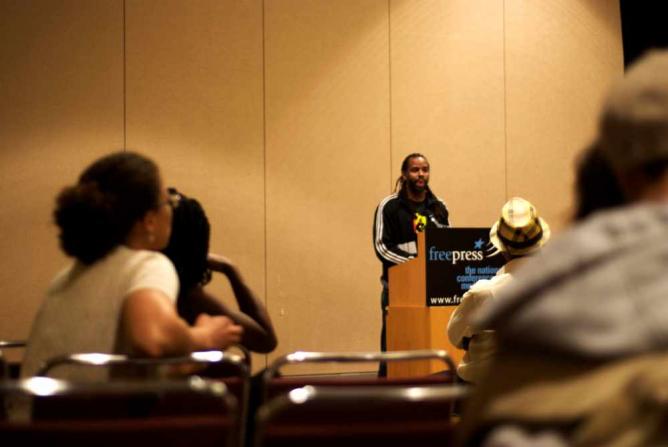 Award-winning American documentary filmmaker Byron Hurt – the mind behind Hip-Hop: Beyond Beats and Rhymes, an observation of masculinity and misogyny in the musical genre – first got involved in anti-sexism activism after graduating college when he landed a job with Mentors in Violence Prevention, a program initiated by fellow activist Jackson Katz, geared towards educating high school and college aged youth on gender violence prevention – an eye-opening experience that marked his immersion into feminism. In his 2011 essay for The Root, Hurt put forth why more black men should embrace feminism stating: “Not only does feminism give women a voice, but it also clears the way for men to free themselves from the stranglehold of traditional masculinity.”

German artist Wolfgang Klaus Maria Friedrich – the first male artist to be exhibited at the Women’s Museum in Bonn – is a self-professed dedicated feminist, saying to German broadcaster Deutsche Welle: “I do it out of conviction. When I see inequality, then I have to address it. That’s my main job as an artist.” A political pop artist, Friedrich has two Women’s Museum exhibitions under his belt: a group show entitled Black Chocolate which explores women’s position in the art world, included his installment On everyone’s lips, while his 2013 exhibition Stronger Than… was a series of 33 paintings of powerful women from across the globe from iconic German feminist Alice Schwarzer to South African politician Nkosana Dlimini-Zuma.

Rahul Roy, an acclaimed documentary filmmaker from India, is the brainchild behind films exploring issues of masculinity and gender relations such as When Four Friends Meet (2000) and Majma (2001), and is a tireless campaigner for gender equality. In 2007, Roy published A Little Book on Men, which addressed issues of problematic masculinity as a social construct from a pro-feminist viewpoint, while his most recent project Let’s Talk Men 2.0 is a series of four films observing masculinity of South Asian men in relation to stories of power, sex, violence and politics and has written a number of articles for the radical political blog Kafila on subjects including the 2012 Delhi gang rape.

Nana Kofi Acquah is a Ghanaian photographer, poet and blogger who travels around Africa using his camera to document the lives of African women to challenge dominant narratives that portray them as victims. Formerly and award-winning name in advertising, Acquah stated in an interview with BBC Africa that having close relationships with his female family members while growing up promoted him to become a feminist and raise awareness of women’s rights saying, “For me, feminism is when we can create a world where a woman has the same rights as a man. I believe my daughter has the same rights as my sons.”

Renowned American sociologist and gender studies expert Michael Kimmel first forayed into feminism as a college student. He volunteered at a domestic violence shelter where his girlfriend worked, and later began teaching on the subject of masculinity. A tireless advocate for male feminism, Kimmel believes feminism can be as enriching for men as it can be for women, stating in an article for Huffington Post, “Real equality will only come about with the active involvement of both men and women.” His seminal text Manhood in America: A Cultural History argues for the deconstruction of masculine ideals while more recent projects include The Guy’s Guide to Feminism co-authored with fellow male feminist Michael Kaufman.