The Most Instagrammable Deserts Across the Americas 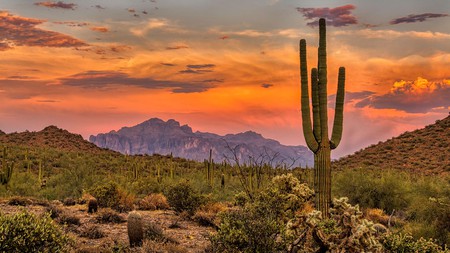 Turquoise waters, white sands and green pastures are really all an Instagram profile needs to stand out. Squeeze in a cascading waterfall and you’ve earned yourself a few more followers. But what about those less-lush landscapes; the ones made of arid, terracotta-hued rock formations? North, South and Central America brim with awe-inspiring deserts that promise to make any lens swoon. Below, we pick the most photogenic ones, to help you up your Insta game.

Ever heard of precipitation in the middle of a desert? That’s exactly what happens in the eastern and southern parts of the Sonoran Desert during the summer and winter months. And this is why this ginormous southwestern desert presents some relatively lush plant life. Apart from the cacti that come in all varieties, shapes and sizes (with the tree-sized Saguaro cactus being the star of the Sonoran), you will find many more plants here, including the creosote bush, the white bursage, the blue palo verde, the elephant tree and the California fan palm. 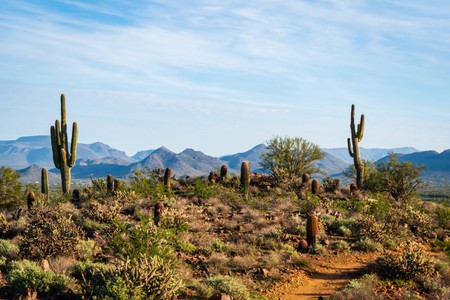 The Sonoran stretches across a number of cities and states – including Arizona and California – which makes it easy to access, while it encompasses sub-ecoregions such as the Gran Desierto de Altar, where you’ll find the biggest dunefield on the continent, and the Cabeza Prieta National Wildlife Refuge within the Yuma Desert, which is home to more than 275 different animal species. With all this marvelous flora and fauna, it’s safe to say you’ll be spoilt for Insta-choice.

The biggest desert in North America, the Chihuahuan Desert mostly sits south of the Mexican border, but one of its most impressive landscapes can be found in southwest Texas, within the Big Bend National Park. This is where the Rio Grande carves a deep gorge en route to Mexico, which makes for an incredible hike along three canyons – you’ll be walking amid agaves, yuccas and prickly pear cacti and might even spot rare fauna such as the gray fox. Canoeing and soaking in hot springs is also possible here. On the New Mexico side of the desert, the White Sands National Park is an unbeatable sight. Its pyramid-shaped gypsum sand dunes provide the ideal setting for meditation. And selfies. 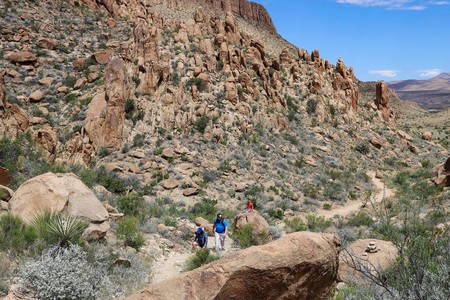 What makes the Patagonian Desert so special – apart from the fact that it’s one of the world’s largest deserts – is its rare proximity to the water. The desert is one of the very few in the world where people can actually live, since the Atlantic Ocean waves that crash on its east make the heat somewhat bearable. Also bordered by the Andes to its west, this Argentinian desert will amaze you with its diverse landscape, marked by canyons, flat plains, river valleys and even glacial lakes in some of its western parts. The unusual topography makes it easier for shrubby and herbaceous plant species, as well as animals, to call the Patagonian Desert their home. 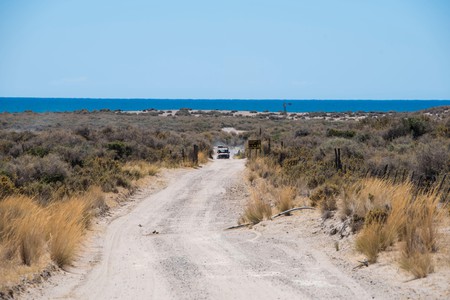 Bordered by the Rockies on the east and the Sierra Nevada on the west, the Great Basin Desert is the largest desert in the US, extending across five states (California, Arizona, Oregon, Utah and Idaho). It is also the only cold desert in the US – during the winter, precipitation here comes in the form of snow rather than rain. The Great Basin National Park within the desert boasts six beautiful subalpine lakes and more than 40 photogenic caves; these are mostly closed to the public to keep their ecosystems safe, but the spectacular Lehman Caves are among the few open for guided tours. 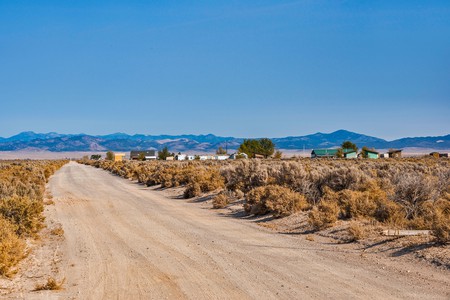 Expect to find some impressive botanical and plant life, too. The bristlecone pine, which thrives in cold temperatures and high winds, prevails, but you’ll also come across sagebrush, greasewoods, saltbushes and other salt-tolerant plants. For a fun selfie with a cared-for antelope, make sure to visit the Hart Mountain National Antelope Refuge in southeastern Oregon or the Sheldon National Antelope Refuge in northwestern Nevada, both within the Great Basin.

Death Valley National Park in the Mojave Desert, US

The Death Valley National Park that sits in the Mojave Desert spans 3.4 million acres (1.4 million ha) across southern California and spills into Nevada. Death Valley is known for its extreme climate – summertime temperatures are typically some of the highest on the planet here, while the Panamint Range within the desert is covered in snow during the winter. This varied terrain is what makes this national park so Instagrammable; a 200sqmi (518sqkm) salt pan (Badwater Basin) sits beside sand dunes, canyons and mountains. Try hiking, biking or horseback riding in the park, or watch the sun rise over the valley from Zabriskie Point. 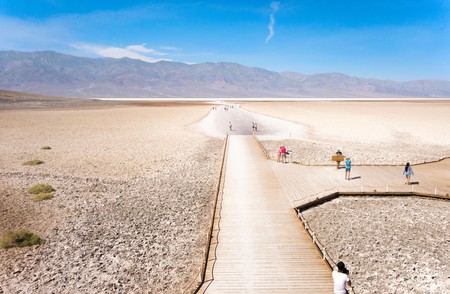 If you’re in search of the driest place on earth, you’ll be sure to find it in this arid land on the Chilean Pacific coast. For the most part, Atacama Desert is composed of stony terrain, salt lakes, sand and felsic lava, while parts of it have never recorded even one drop of rain. Atacama owes its extreme aridity to a constant temperature inversion caused by the cold Humboldt Current, the pressure caused by the Pacific anticyclone and the rain shadow cast by the Andes and the Chilean Coast Range. It should come as no surprise that the desert has been used by researchers as an experimentation site for Mars simulations on numerous occasions. Still, in the Chaxa Lagoon – created by a layer of water sitting atop the salts – you’ll find some fascinating birdlife, including different species of majestic, picture-perfect flamingoes. 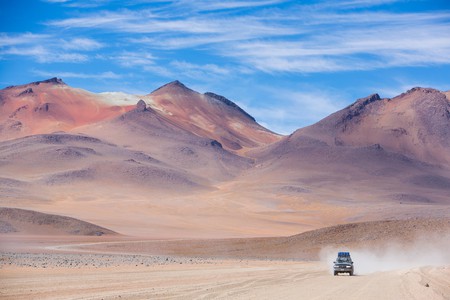 Salar de Uyuni, in southwest Bolivia, is not your typical desert. Instead of the classic terracotta-colored scenery, Salar de Uyuni presents an all-white landscape of salt rock formations, which actually make up the largest salt flat in the world. This is all thanks to a prehistoric lake that went dry, leaving behind this otherworldly, salty masterpiece. The salt flat covers about 3,900sqmi (10,000sqkm) and is set at an altitude of nearly 12,000 ft (3,658m). It’s worth taking a guided four-wheel drive tour to further explore Salar de Uyuni; wildlife is rare here but you might see some pink flamingoes along the way. 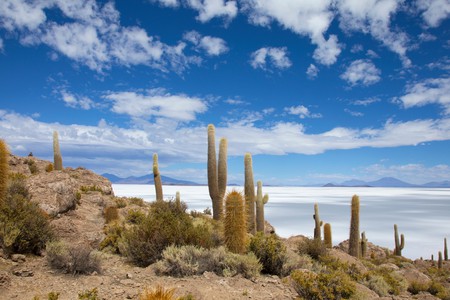 The vast Colorado Plateau is spread across the Four Corners region (where Colorado, New Mexico, Utah and Arizona meet), and offers plenty of opportunities to marvel at a wide range of natural treasures. Among them is the legendary Grand Canyon, as well as eight other national parks – all made up of astounding rock formations, including natural bridges, domes and hoodoos. The spectacular slot canyons of Utah are also part of this area, as is the Paria Canyon-Vermilion Cliffs Wilderness area in northern Arizona. In the latter, don’t miss the Wave: a sandstone rock formation known for its colorful, undulating form, found on the slopes of the Coyote Buttes. 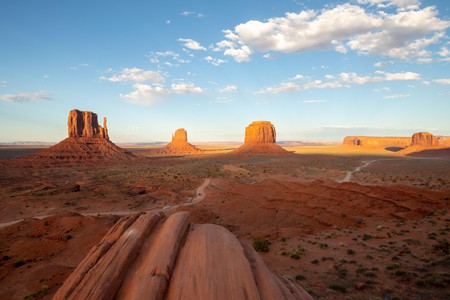 This ecoregion occupying the western portion of the Baja California peninsula in Mexico experiences relatively high humidity –brought by winds from the Pacific Ocean – as well as moderate temperatures, which are way lower than the neighboring Sonoran Desert. The climate is still generally dry, but humid enough to allow for a variety of flora to thrive, including endemic species like the creeping devil. And even though Baja California is most popular for its beaches, it’s worth venturing further inland to discover this desert’s unique beauty. 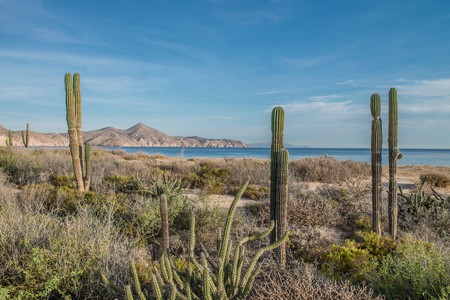