The Most Impressive New Year's Eve Firework Displays Around the World

When midnight strikes on the 31st of December, eyes all over the world turn to the sky. And while most firework shows adequately draw the ‘oohs’ and ‘ahhs’ that they’re expected to, there are a select number of them that leave locals and guests alike with their jaws on the floor. These nine places around the globe have dedicated themselves to kicking off the New Year in spectacular fashion.

When it comes to modern-day glitz, there are few places as over-the-top as Dubai. It’s a characteristic that ‘the city of the future’ goes all out for its New Year’s Eve display, with impressively timed explosions launching from over 20 different rooftops across town. Current tallest tower in the world Burj Khalifa is at heart of the festivities and combines fireworks that shoot off from its sides with a dazzling light show fitted to its mammoth measurements. A couple of quieter spots to watch the extravaganza from include Bay Avenue and the solar-powered Al Khazzan Park.

An Aussie New Year’s at Sydney Harbour is always one for the books. Underscored by a dramatic soundtrack and inspired by a different theme each year, the show takes place above the spikes of Sydney’s Opera House and the Harbour Bridge. As the first major city where the clock strikes 12, the famous spectacle is televised all over the world. For those looking to ring in the New Year on a particularly lavish note, around $300 gets you a spot on a cruise ship bobbing between the unfurling fire flowers in the air.

Another metropolis taking mighty advantage of a charming body of water for its NYE celebrations. Set over the river Thames with Big Ben and the London Eye as iconic background figures, London’s advanced pyrotechnics have grown to be so popular in recent years that the event has become ticketed to prevent overcrowding. The banks are still reliably crawling with pumped-up partygoers, but at least the £10 prevents you from having to set up shop in the middle of the day to secure a viewing spot. Tickets are being released in waves on the Mayor’s site.

At ‘the hottest spot north of Havana’, New Year’s falls smack-dab in the summertime. What’s already a party haven now becomes a place for over two million revellers in all-white outfits and flower garlands to dance till dawn on Brazil’s most famous beach – the same beach from which a stream of fireworks take over the bay’s sky. Brazilians refer to these wild, glorious beach parties all over the country as the Reveillons, and believe in giving the New Year the most flamboyant welcome imaginable. 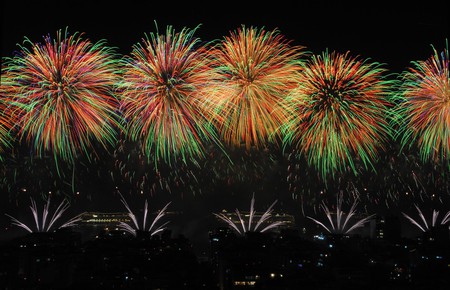 If you time things right, sappy dreams of kissing your sweetheart in front of the Eiffel Tower and having fireworks explode in the background could actually come true, though it’s a bit of a gamble. The romantic getaway staple and City of Light has used its foremost symbol as the centre stage for breathtaking fireworks before – including a monster display at the turn of the millennium – but a splendid light show on the Arc de Triomphe is the only spectacle that’s absolutely guaranteed. Either way, you can rely on the Champs-Élysées becoming a fountain of popping champagne bottles and bonne année wishes at the stroke of midnight.

Hong Kong has a soft spot for fireworks. Not only does it break out the pyrotechnics for Chinese New Year (which falls in either January or February on the Western calendar) and National Day, it is just as happy to claim the 31st December as another occasion to fill the sky with fire flowers. The usually frenzied Hong Kong is even more packed during this night, so claim your spot on one of the waterfront promenades or the harbour’s pontoons early, and enjoy a homemade picnic and some bubbly as you wait for the magic to begin.

Where else in the US can you extravagantly start off the New Year than in the City of Sin itself? The Strip, lined with its luxury hotels and shimmering casinos, is the obvious place to be as the countdown reaches a 20-minute onslaught of colourful explosions. The rooftops of the MGM Grand, The Venetian and other iconic establishments function as launching pads, and afterwards the resorts are happy to welcome you back in for drinks, dancing and general debauchery in razzle-dazzle settings.

The Scottish capital may not be known for its pleasant climate, but New Year’s turns Edinburgh into a three-day long outdoor party. ‘Hogmanay’, as end of year celebrations are called, starts up the 30th December with a bang; fireworks serve as a splendid finale to a torchlight procession that has wound its way through the streets of this hilly city. The day after is an even bigger to-do, with live concerts dotted all over town, massive dance-alongs and 4.5 tons of fireworks above Edinburgh Castle signalling the start of a new year. The event winds down January 1st with the ‘Loony Dook’ (a traditional dive into River Forth’s icy waters) and performances highlighting Scottish theatre and live music.

Given the Icelanders’ tendency to migrate indoors between 10:30pm and 11:30pm on New Year’s Eve to watch an immensely popular comedy show (Áramótaskaup), Reyjavík might seem an odd choice when in the mood for a festive night. Yet its curiously empty streets are just the calm before the storm. Half an hour before midnight, people start trickling out of their homes again, readying the no-less-than 500 tons of fireworks that will soon crowd their skies. Even after pubs close down in the wee hours of the morning and the celebrations are wrapped up, you still have a great chance of catching nature’s own fireworks – the Northern Lights – at one of the country’s (or sometimes even the capital’s) more remote places all through January.