Five Influential Books by Christopher Hitchens You Should Read

Not so much an atheist as a self-proclaimed anti-theist, Christopher Hitchens has gained renown in the academic community for his unapologetic stance on many of life’s biggest questions. His books encourage thought-provoking discussion and debate and have never shied away from straying into the realm of controversy. Apart from being an admired writer, he was also a ferocious debater, with the term ‘hitchslap’ (the act of eviscerating his debate opponent via rational argument) coined just for him. Here are five of his best ‘hitchslaps’.

god is not Great: How Religion Poisons Everything

This controversial New York Times Bestseller, in true Dawkinsian (Richard Dawkins) style, makes the ultimate case against religion addressing the aspects of life that fall prey to its ceremonies, rituals and teachings. Citing contemporary scientific theories and discoveries, Hitchens expertly crafts his case in considering the merits of a secular life of reason and empirical understanding, rather than faith. It is definitely a book that will rouse its readers into discussion with high-tension topics such as radicalism and the folly of blind faith. Whether you practice a religion or not, wish to better develop your position on this complex debate, or the premise has captured your intellectual curiosity, this book won’t be forgotten easily.

The last of Hitchens’ novels, this frank and comprehensive consideration of human mortality, was written as Hitchens was suddenly cast ‘from the country of the well across the stark frontier that marks off the land of malady’. Whilst battling esophageal cancer, his last few months of life are spent contemplating and chronicling his thoughts on humanity and illness; its incomprehensible weight on the sufferer, its taboos, its power to alter the course of life. The prospect of what he faced beyond the confines of mortal life did not alter his position on all things spiritual, rejecting religion during his illness as he did throughout his life and work. As his health deteriorates we see a man facing life’s greatest mystery with frankness, curiosity and acceptance. 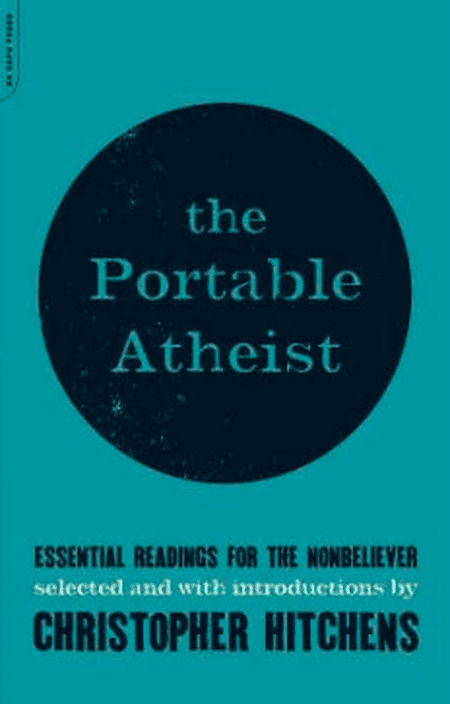 The Portable Atheist: Essential Readings for the Nonbeliever

Another of Hitchen’s more provocative book titles, this collection of works once again advocates a life of godlessness by presenting arguments from the wide spectrum of atheism; from the sceptical agnostic to the firm rejecter of faith. All of the essays are formulated to extol the ideals of secularism. The book curates the voices and arguments of such well known figures as: Charles Darwin, Karl Marx, Ian McEwan, Bertrand Russell and of course, Richard Dawkins. This book with engage, inspire, perhaps even anger, but it won’t dull you for a moment.

Letters to a Young Contrarian

Letters to a Young Contrarian is arguably Hitchens’ swan song. Who better to write the ‘guide book’ to outspoken rebellion than the acute mind of a man who has made a career out of questioning and provoking discussions about life’s most complex arguments. This book delves into the very idea of ‘contrary opinions’ and the human aspect of opposition. He discusses the integral role of disagreement to democracy, society but also mourns a lack of logical reasoning evident in contemporary thinking. It is sure to resonate with the ferocious spirits who seek to reshape the political and social gospels of modern society. This is an essential read for keen historians, politicians and sociologists.

This anthology of short essays covers a range of Hitchens’ trademark topics and arguments. From faith to civilization the reader follows his decisive and unapologetic thoughts as they dissect each argument with wit, clarity and an effervescence that is uniquely his. Hitchens also examines notable figures across a variety of academic disciplines. Charles Dickens, J.G Ballard, and Karl Marx are among the names discussed as Hitchens offers new perceptions of these legendary figures with an insight accrued by an individual with formidable skill, experience and understanding of the human condition.