The Art of Romare Bearden: Reflections on American Culture 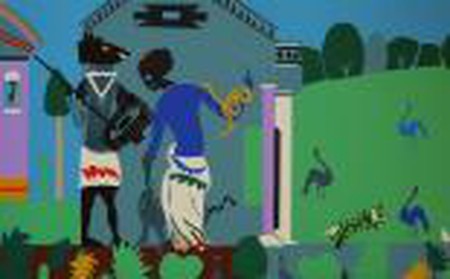 Bearden was a key figure in the struggle for civil rights, and as a cornerstone of the Harlem art scene forged the way for young African American artists. His collages and paintings, many of which are currently on display in Jenkins Johnson Gallery San Francisco, drew on contemporary issues and were always in dialogue with other artists, popular culture and politics. 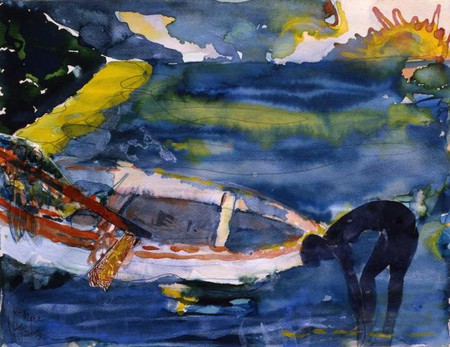 Romare Bearden was not an artist’s artist, but one thoroughly engaged with his own experiences and contemporary America. He used scraps of coloured paper, old magazines and found objects in his famous collages, and, like fellow New York collagists Robert Rauschenberg and Jasper Johns, his work reflected the mishmash of cultures in 20th century America — flotsam and jetsam forming something beautiful and cohesive.

His work has been variously filed with that of the Abstract Expressionists, cubists, pop artists or surrealists, but as he told an interviewer: ‘I wasn’t an abstract expressionist or a pop artist… I had something unique to say about the life I knew best’. In the same interview, he said he used collage because it was like ‘a documentary movie — immediate, and made up of the world around him. 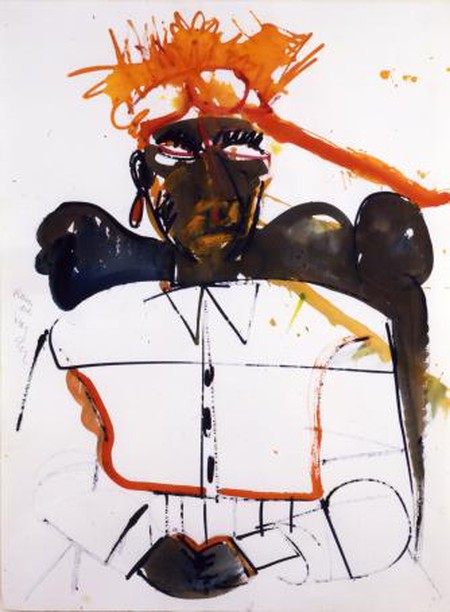 He was born on September 2, 1911 to Richard Howard and Bessye Bearden in Charlotte, North Carolina, but the family moved to New York when he was a young child. His work draws on his Southern roots as much as it does the colourful world of Harlem, often featuring families, jazz bands and the North Carolina countryside.

Travel and displacement are also constant themes, reflecting Bearden’s own move from the South and the black diaspora worldwide. The Odyssey, his 1977 series of 20 colleges and watercolours reimagines Homer’s epic tale through black experience — a combination of myth and stylised realism.

Bearden received a degree in education from NYU and went on to work as a social worker in New York from the 1930s onwards. Through his time at college, he took courses in art and worked as art director and lead cartoonist at The Medley, the journal of a university society.

Foreshadowing his work’s focus on socio-political issues, Bearden contributed covers and pieces to the journal, and later became the cartoonist for The Baltimore Afro-American until 1937. Throughout his life, Bearden seamlessly combined the social issues of the day with larger themes in work that is as historical as it is timeless. He constantly explored the ways everyday life interacts with and becomes archetype, examining myths and legends through the people and places he saw every day.

Far from standing in the way of his art, Bearden’s social work brought endless fresh material to the work he created in the evenings and at weekends. His work from this period is focused on New York, showing entire streets of shopfronts or collaging an image of the New York mayor onto a topsy turvy landscape of skyscrapers. 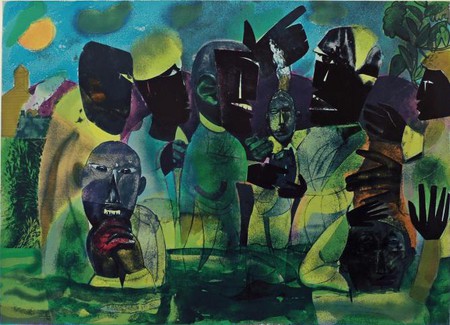 Another major influence was his experience serving in the Second World War — it was here, and during subsequent travels in Europe, including time spent at the Sorbonne in Paris, that his mature collage style developed: bright, block colours and a focus on humanism in the wake of the war’s tragedy. His pieces were etched, painted, cut and layered into complex jigsaws of photography, in which even faces were made up of four or five other faces cut out from magazines or prints.

His first solo exhibition was held in Harlem in 1940 which was followed by another solo show in Washington DC in 1944. His distinctive style drew on 20th century abstract artists Duccio, Cezanne, Picasso and Matisse, but also the sculpture, masks and textiles of African art. 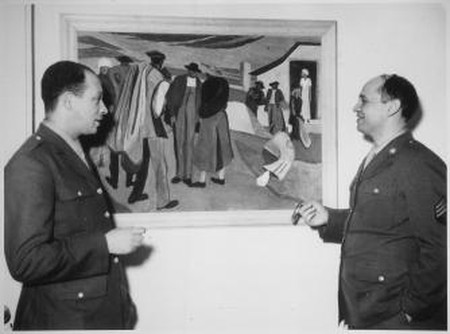 Through the 1950s and 1960s, Bearden flourished in the vibrant Harlem cultural scene, mixing with the likes of writers Langston Hughes and Ralph Ellison and fellow artist Joan Miro. In 1954, he married Nanette Rohan, and the pair became a cultural power couple. Nanette’s Theater of Contemporary Dance encouraged black dancers and choreographers, while Romare did the same for young artists as art director of Harlem Cultural Council from 1964. He founded The Studio Museum and Cinque Gallery in Harlem to support young, minority artists, and was also a founding member of the Black Academy of Arts and Letters in 1970.

While he is remembered in his 1988 New York Times obituary as the ‘nation’s foremost collagist’, Bearden tried his hand at every cultural endeavour on offer. His work appeared on the covers of Time and Fortune magazines (drawing on his experiences illustrating journal covers at University) and he was also a prolific writer, producing titles such as the posthumously published A History of African American Artists: From 1972 to the Present. He was a great collaborator, often co-authoring books and organising group exhibitions, such as the seminal ‘The Art of the American Negro’ in Harlem in 1966.

Bearden was a pillar of the Harlem arts community and was adamant that the African-American artist had a key part to play in the struggle for civil rights. He was honoured by President Carter in 1980 and was presented with the National Medal of the Arts by Ronald Reagan in 1987.

One year later, on March 12, 1988, he died at 75 from a stroke in a New York Hospital after a struggle with bone cancer. 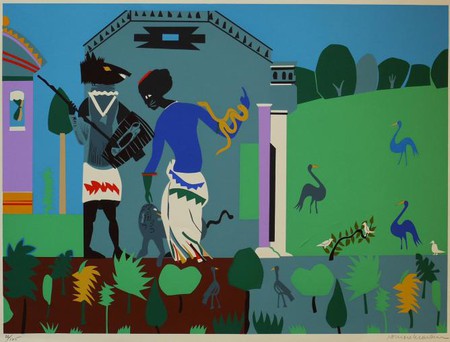 Like his collages, Bearden’s life was made up of a vast mixture of influences and interests. His works include magazine covers, cartoons, prints, tapestries, theatre sets, sculpture, books, and even a children’s book about the Civil War. He also pitched for a baseball team (the all-black Boston Tigers) and had a lifelong love of cats.

Today, Bearden’s work is regularly exhibited across the world. Recent exhibitions include Storyteller at the Jenkins Johnson Gallery, San Francisco, an exhibition of Bearden’s later work; and the Smithsonian’s touring exhibition Romare Bearden: a Black Odyssey. He is also featured in the permanent collections of the Metropolitan Museum of Art as well as other museums across the United States.

He is remembered as a mentor and collaborator in an art community that forged the way for young black Americans, and as a creator of works full of colour, life, and his own boundless energy.

Romare Bearden: Storyteller will be on display at Jenkins Johnson Gallery San Francisco until June 21 2014. Visit the gallery website for more information.