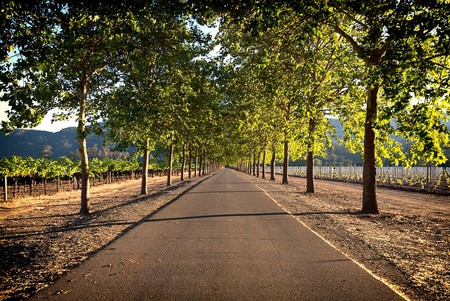 If you need a little extra motivation to sign up for your first 5k, running races with alcohol are becoming more and more popular. While some races save the booze for the finish line, others incorporate the drinking throughout the run. But all of these races offer plenty of post-race wine or beer to rehydrate after your efforts. Grab a running – or rather, drinking – buddy, and sign up for one of the 13 best runs involving alcohol!

While you don’t have to drink to participate in the Shamrockin Run 8k, we highly advice you to sign up for the Guinness Challenge to enhance your St. Patty’s weekend race experience. Only 300 men and 300 women can participate, so sign up early! You’ll need to drink four ounces of Guinness beer near each mile marker on the 4.97-mile course. Judges will watch closely to make sure that you drink the entire beer before giving you a stamp to move on to the next station. Green beer waits for all competitors at the finish line!

The Bend Beer Chase takes place during one day with four to six people per team running varying distances of four to eight miles for 12 different legs. The course begins in Bend, circles around to many local breweries, and finishes back in Bend. Each time you exchange relay partners at a brewery, you have the option to drink a three- to four-ounce pour of their local craft beer. Drinking the beer is not required, but why else would you sign up for a beer relay, really?

Picture this: a full marathon course offering 22 wine stops plus opportunities to gorge on oysters, cheese, ham, steak, and ice cream along the course. The point of this marathon is not to accomplish your personal best time. The point is to eat, drink, dance, party, and enjoy a day exercising while also touring this beautiful region in France! The race organizers turn the entire weekend into a fun affair, featuring a ball and fireworks in the evening after the race and a recovery walk through the Médoc wine region the day afterwards.

Enjoy waterfront views of the NYC skyline as you sprint quickly towards the finish of the Beer Hop race. Why would you sprint, you ask? Because waiting for you at the finish line are unlimited tastings of more than 15 local craft breweries. Last year, 1,200 runners participated and consumed 59,400 ounces of beer.

This five-mile course features “slobstacles” along the way, and a pint of beer at every mile marker. The “slobstacles” are edible British drinking foods, such as pork pie and Cornish pastries. The event is based at the Hoop and Grapes pub in central London.

It's that time of year again… #greatbritishbeerathon

The Blood, Sweat, and Beers race features scenic trail running, a post-race beer celebration, and a post-run BBQ. Runners can choose to participate for the Long Course (10.5 miles) or the Short Course (5.9 miles); both courses promise lots of hills, dirt, mud, and local wildlife.

The Napa-to-Sonoma race organizers claim that, “This is not your typical running race, this is a lifestyle experience!” They must be doing something right, because the race sells out every year on the day that registration opens. For the July 2018 race, the registration date has not been announced yet, but will be announced on the website soon. Claim your logo race wine glass for tastings post-race from outstanding local vineyards.

Now THIS is what a good Sunday looks like. #winetime

Can’t make it for Napa-to-Sonoma? Not to worry, an entire series of sister races has popped up in various locations to offer other beautiful courses through the best wine regions in the United States and Canada. Oregon’s race is famous for its small-town charm, great wines (especially Pinot Noir), and post-race Wine & Music Festival. The race takes place less than an hour from Portland annually in September.

Sonoma might be home to some of the best vineyards in America, but it is also the center of a growing craft beer scene. Accordingly, the IPA 10k & Beer Mile Invitational celebrates the best Sonoma area craft brews with a scenic 6.2-mile course which begins with a start line beer toast. On Sunday, elite runners from around the world compete in the Beer Mile Invitational, a unique race that involves drinking a beer, running a quarter-mile, and repeating the process four times. The current world record is 4:34:35, held by Corey Bellemore of Canada.

Somebunny loves you! Though we’ll miss all the “hoppy” puns, the 2018 IPA 10K is NOT on Easter weekend this year! Bring the whole family to stay and play in Sonoma County on April 14th!

One hour west of Washington D.C., the Virginia Wine County Half Marathon is held in and around historic Leesburg, Virginia. The race starts and ends at Doukenie Winery, where you will also enjoy the post-race Wine & Music Festival. This is the only event in the Wine County series held in the eastern US, taking place in June each year.

California really spearheads the drive for alcohol-themed races with professional organization. At the end of wine harvest in October, runners race through the Alexander and Dry Creek Valleys with perfect temperatures for running as the tree leaves are colored orange, brown, and red. Runners participate in costume for both the half marathon and the 10k, and everyone enjoys the celebration at the finish line!

Don't miss the on-course wine stop at @mazzoccowinery (near mile 10) of the #HBwinehalf this weekend!

Budapest Half Marathon in Budapest, Hungary

The Budapest Half Marathon itself does not involve a focus on alcohol, but it is coincidentally held the same weekend as the Budapest Wine Festival every year in September. Post-race, you’ll find a lot of athletes with their bibs still on in the shade of Buda Castle sampling the very best Hungarian wines from every region of the country. It’s the perfect way to celebrate your success!

The race organizers of the Beer Mile World Classic call the it the “World’s Premier Drinking Race.” The concept is simple, four beers and four laps for a total of one mile. But those beers are 12 ounces each with at least 5%ABV. Translated: more than three pints in (usually) about 10 to 15 minutes for most runners.