The Ultimate American Comfort Foods You Need To Try

Despite what the rest of the world thinks, America doesn’t solely survive on hamburgers and bad pizza. The country is a rich blend of cultures and customs, with its own unique culinary traditions. Of course, there are specialties unique to states or regions, but most Americans can relate to a few comforting home-style standards. Ask any American, and they will most likely have fond memories, and a healthy appetite, for every one of our ultimate American comfort foods. 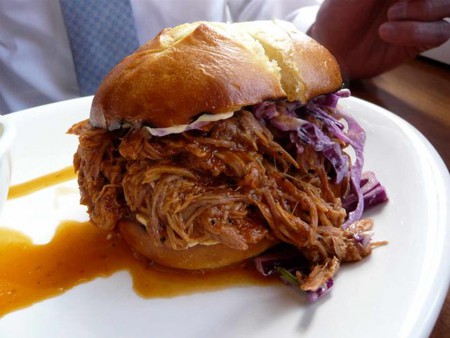 It’s no secret that Americans love meat. They are often criticized for their large farms and over-consumption of meat products, but try a bite of good barbecue, and you may just be hooked. Now, the term ‘barbecue’ is pretty broad and can describe quite a few different meats and techniques; however, the most classic is smoked beef or pork. Brisket, for example, is a cut of beef that is usually seasoned with a dry rub of spices and then slow cooked over flavorful wood chips until it is tender. Pulled pork is similar, typically using a pork shoulder cut that is slowly smoked until it is soft enough to shred. Both meats are served with barbecue sauce: a condiment that is typically a blend of sweet and savory ingredients. 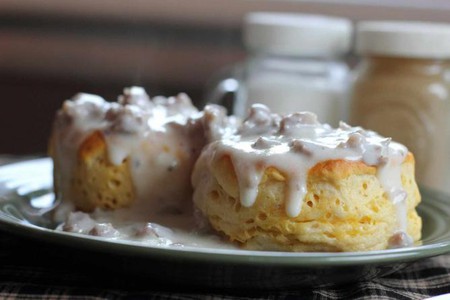 There is no way of knowing exactly where biscuits and gravy originated, but it is a staple in any traditional country restaurant and seemingly on every American grandmother’s table. The base is a fluffy, warm American biscuit made from flour, leavening, and layers of butter or lard. The biscuits are baked to golden brown and then served underneath a blanket of white gravy: usually a mix of flour, butter and milk. Ground pork sausage and black pepper are often added to the gravy to give it an extra punch of flavor. Biscuits and gravy are a hearty, gut-busting favorite for an authentic American breakfast.

Many people who are unaccustomed to chicken fried steak can be confused at this dish’s name. The home-style dinner favorite has nothing to do with chicken, other than that it is fried like chicken. It is actually a thinly cut or pounded beef cutlet that is breaded and pan-fried to a golden brown. At this point, the dish resembles a German wiener schnitzel or the Italian breaded veal scaloppini. But the Americans finish the dish off with either white country gravy or a brown beef-based gravy. Add to that a side of mashed potatoes and green beans, and you have a dinner that will stick to your ribs. 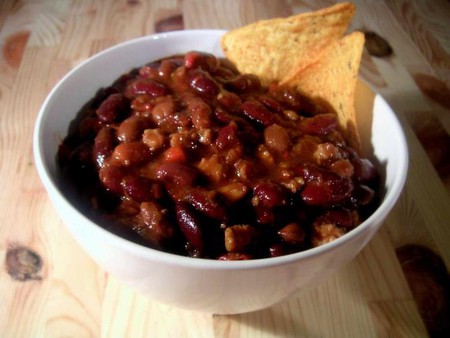 Chili is a bit of an enigma in the USA. It can encompass an array of different ingredients and be consumed in countless ways. In its most classic form, chili is a thick stew of beans, meat, and onions in a base of tomatoes, chili peppers, and spices. It is often kicked into higher gear with spicy peppers and unique flavor combinations. There are dozens of chili cook-off competitions across the country every year, with home cooks vying for top honors for their recipes. Chili is traditionally served plain with a side of cornbread or tortilla chips, but the chili dog is also wildly popular in America. It is made by topping a hotdog with a scoop of the thick soup and is popular fare at baseball stadiums and sporting events. 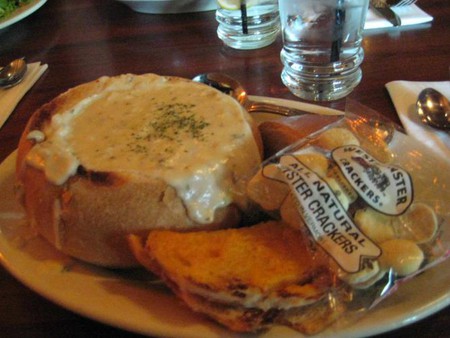 Clam chowder in a bread bowl with oyster crackers | © Marlith/WikiCommons

Though there are several variations of clam chowder, the most well known is New England clam chowder. It originated in the Northeast states but has spread all the way to the West Coast. The soup has a cream base, with potatoes, onions, and clams. Typically, it is flavored simply with clam juice and salt and pepper. The soup is almost always served with oyster crackers: a flour-based, salty crisp. In San Francisco and other parts of the country, it is popular to order clam chowder in a bread round with the middle hollowed out, known as a bread bowl. While fresh clams are preferable when available, canned clams are also commonly used. The soup is simple to make and relatively inexpensive, making it an easy crowd pleaser.

Many different cultures around the world have their own version of fried chicken. In the United States, they have taken it to a level of obsession. Americans can find fried chicken at the most seedy fast-food restaurants, all the way up the food chain to some of the country’s most elegant fine-dining destinations. Though taste and quality surely differ, the basic concept is the same — chicken pieces are are battered and deep-fried for a dish that is crispy and flavorful on the outside and moist and tender on the inside. Some regions choose to batter the chicken in buttermilk and cornmeal, while others use a combination of egg and flour. Whichever version you find, you’re sure to meet a long line of eager customers if you find a spot with great fried chicken. 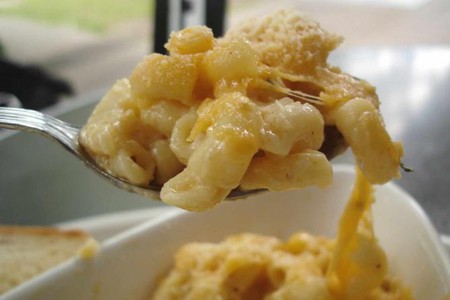 A gooey bite of macaroni and cheese | © Vancouver Bites/Flickr

To be fair, Americans certainly didn’t come up with the idea of a pasta dish baked with cheese. But they have put their own unique spin on it. When not made artificially from a box, good ‘mac ‘n’ cheese‘ is something to lust after. Elbow-shaped noodles are coated in a flour and milk-based sauce, similar to béchamel, and ridiculous amounts of cheddar cheese. The mixture is typically poured into a baking dish, topped with more cheese and dry breadcrumbs, and then baked. What comes out of the oven is a bubbly, gooey bit of heaven that is a favorite of all Americans, old and young. 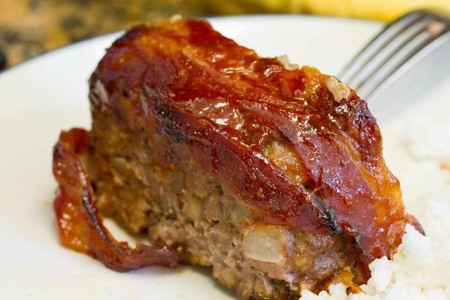 A slice of meatloaf | © randychiu/Flickr

Like the country itself, American meatloaf definitely got some inspiration from other cultures. The mixed-meat entrée strongly resembles a large Swedish meatball. This version, however, takes the mixture of ground beef, breadcrumbs, vegetables and egg, and forms it into a loaf, or bread pan. It is then covered most commonly with ketchup and baked. Once cooked thoroughly and solidified into its bread-like shape, it is sliced into portions for serving. Meatloaf rose in popularity during the Great Depression of the 1930s as a way to stretch expensive meat by adding fillers, but it hasn’t gone away and is still a comfort food on many American tables. 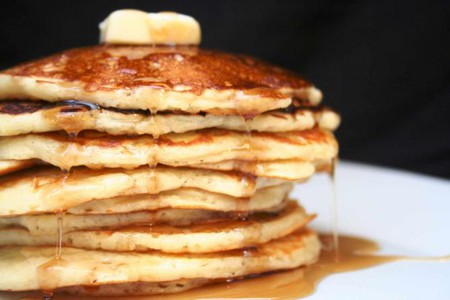 Picture this scene: kids waking up on a Saturday morning, running downstairs, and clamoring for a seat at the table to enjoy whatever Mom is cooking. If that scene is in America, there is a good chance that mom is cooking pancakes. The breakfast staple is made from a batter of eggs, flour, and milk, which is pan-fried on a flat skillet. The cakes are then topped with butter and drizzled with maple syrup. Sometimes, the over achieving parent will add chocolate chips or blueberries to the batter for a special hidden treat. Pancakes can be found on the menu of almost any restaurant serving traditional breakfast dishes, regardless of the area of the country. So, order a ‘short stack’ and enjoy an American tradition. 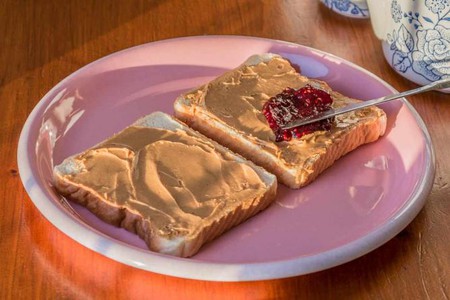 The Italians have their Nutella, the Brits have their Marmite, and Americans have peanut butter. The spread is a simple blend of peanuts and usually oil and salt. The result is a condiment that is beloved. When buying peanut butter at the market, customers must choose creamy or chunky — indicating whether the peanuts were fully blended to produce a smooth spread or only partially blended, producing a spread with a peanut crunch in every bite. Ask almost any American and they will have had peanut butter on a sandwich with jam or honey or spread on fresh-cut celery. It is also often combined with chocolate to make a variety of cookies, candies, and ice creams.

What’s more American than apple pie? This question is included in the lyrics of a familiar folk song, showing the enthusiasm and history of pie in the USA. The New World can hardly lay claim to the invention of this dish, but they have definitely put their stamp on it. The tradition of meat pies was brought to New England during colonial times, and the pastry developed from there. Meat pies are far less common now in the US, with fruit pies taking the main stage. The traditional flour and butter pastry is filled with apples, cherries, nuts, and other fruits. As a dessert, the pie has become an absolute essential during the Thanksgiving holiday feast. 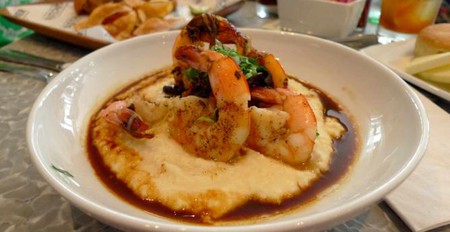 This dish is decidedly more Southern but nonetheless recognizable. Shrimp and grits can be served anytime of the day, but the dish is most popular for brunch or dinner. The plate starts with a bed of warm grits: ground cornmeal cooked with butter and cheese. Shrimp is then sautéed in a separate pan with spices and usually barbecue sauce. The two are then combined for a one-dish meal that is warm and satisfying. The dish has swept the country’s restaurant scene over the past few decades, even in fine dining establishments, but remains a humble dish in home kitchens.