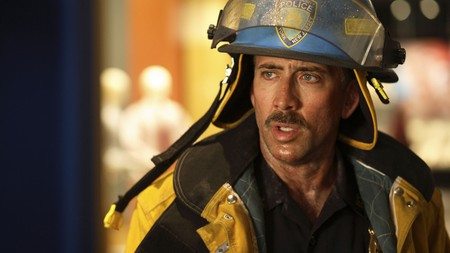 In the fifteen years since the World Trade Center fell, countless of movies have appeared that were inspired by the direct and indirect consequences of the attacks. These eleven significant ones provoked strong emotions and divisive responses, showing just how hard it is to navigate a film through the treacherous waters of real-life tragedy.

Of all the documentaries made about 9/11, the one aired on CBS just half a year after the attacks feels the most visceral. When French film-making brothers Gédéon and Jules Naudet and director James Hanlon set out to transcribe the life of a rookie NYC firefighter on film in the summer of 2011, they shot a lot of footage with the iconic Twin Towers in the background. Jules ended up filming one of only three known recordings of the first plane hitting the World Trade Center. What follows is an immersive ground zero account of the chaotic day as the documentarians scramble to record the first responders’ reactions to the unthinkable.

Mirroring an all but forgotten 1967 collage film made in response to the Vietnam War, 11’09’’01 September 11 pasted together eleven short films by eleven international art house directors. All last exactly eleven minutes, nine seconds and one frame, and some – like Alejandro González Iñárritu’s black frame with flashes of bodies falling from the towers – are especially difficult to watch. Other contributors include Sean Penn, Claude Lelouch, Amos Gitai and England’s Ken Loach, who shows an exiled Chilean man expressing his condolences towards America before reminding us that on another September 11th, in 1973 to be more exact, the Chilean president was murdered in a coup that gave power to Pinochet and was orchestrated by president Nixon and Henry Kissinger.

Fahrenheit 9/11 is Michael Moore’s reckoning with the Bush administration. Exploring the events’ aftermath, and in particular the American invasion of Iraq, Moore’s controversial documentary seethes with sarcasm, righteous indignation and fast-paced montage clips set to the sound of shredding guitars. While considered far-fetched in its indictment of Bush as a warmongering buffoon, the message of unnecessary loss of life hits home on sequences that show Moore hassling congressmen to enlist their own children.

The first film to explore what happened on United Airlines Flight 93, the Discovery Channel’s 2005 docudrama reconstructs the events based on voice recordings and lengthy interviews with the passengers’ loved ones. Though tension-building techniques such as split-screen frames seem out of place, the film’s saving grace is the unique insights provided into the men and women who overtook their hijackers to crash the fourth plane in an empty Pennsylvania field, a 150 miles north of Washington DC.

Knowing the US’ tendency towards eternal optimism, it’s no surprise American filmmakers have grasped upon the act of collective heroism that transpired on Flight 93 to indicate human resilience in the face of terrorism. British director Paul Greengrass notably opted for unknown actors – and even some of the traffic controllers who were actually involved on 9/11 – in this powerful, real-time drama that walks the aesthetic tightrope between documentary and fiction.

Spearheaded by the usually provocative Oliver Stone, World Trade Center is a surprisingly safe and uplifting account of 9/11 from the perspective of two first responders. Stone undercuts the true story of the brave policemen caught in the rubble with scenes of their wives learning about the attacks and flashbacks to better days that tug at the heartstrings. Nicholas Cage, a big budget and many promotional efforts couldn’t save the film from doing poorly at the box office.

Adam Sandler shores up his ‘serious actor’ reputation after Punch-Drunk Love as a grief-stricken soul whose family was aboard one of the 9/11 planes and who has reverted back to early adolescence, aimlessly zooming around New York on a motorized scooter. Bumping into his old college roommate – an understated Don Cheadle – brings up a past that Charlie would rather pretend didn’t exist, confronting us with the personal consequences of the attacks.

A family melodrama most recalled for its misconceived ending, Remember Me casts Emilie de Ravin and Robert Pattinson in the roles of NYU lovebirds who connect through a shared sense of loss. Though its central romance is believable and at times engaging, the film’s climax in one of the Twin Towers on 9/11 has frequently been objected to as emotional blackmail and a cheap re-purposing of real-world tragedy for extra dramatic effect.

As 9/11 happened around him, five-year-old Brook Peters was attending his first full day of kindergarten. A decade later, the boy – by then a 14-year-old budding director – had his documentary screened at Tribeca Film Festival. The 38-minute film tells the experience from the point of view of New York’s children and their school community.

A decade after 9/11, Extremely Loud and Incredibly Close reeled in one of the most contested Best Picture nominations in modern history. The adaptation of Jonathan Safran Foer’s second novel, in which a gifted but socially challenged boy goes on a New York odyssey to deal with losing his father in the World Trade Center, was divisive. While neatly produced, cinematographically gorgeous and with strong supporting performances from the likes of Tom Hanks and Viola Davis, this film too is often seen as using a tragedy for its own heartstring-tugging benefits.

One of few 9/11-related movies that managed to garner box office success and critical acclaim at the same time, Zero Dark Thirty brings the hunt for Osama Bin Laden to an end in toned-down yet spectacular fashion. Nearly three hours long, methodical and researched to the bone, Kathryn Bigelow’s follow-up to Oscar winner The Hurt Locker opens on a black screen. A 90-second audio montage of emergency calls made from inside The World Trade Center impresses upon us the pressure and importance of finding the al-Qaeda leader.