The 11 Most Historic Bridges In The World 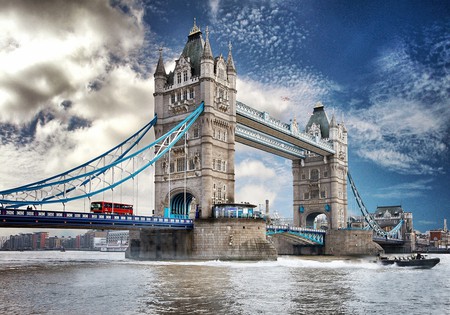 From more modern structures like the USA’s Brooklyn Bridge or Golden Gate Bridge to the famous, old Italian bridges of Venice and Florence, bridges form some of the world’s most iconic architectural wonders. We take a tour across the globe, exploring some of the recognizable, historic bridges mankind has constructed.

The Bridge of Sighs

Designed in 1600 by Italian architect Antonio Contino, The Bridge of Sighs is one of the most iconic of Venice’s 400-plus bridges. Officially the Ponte dei Sospiri, the bridge apparently got its English name after Lord Byron referred to it as such in his epic, four-part poem Childe Harold’s Pilgrimage.Despite its beautiful, Baroque style and romantic exterior belies its original purpose — to transport prisoners between the Doge Palace and its new prison cells across the Rio di Palazzo. Nowadays, there’s a much nicer story behind the bridge. Legend has it if couples share a kiss underneath The Bridge of Sighs, their love will last forever. 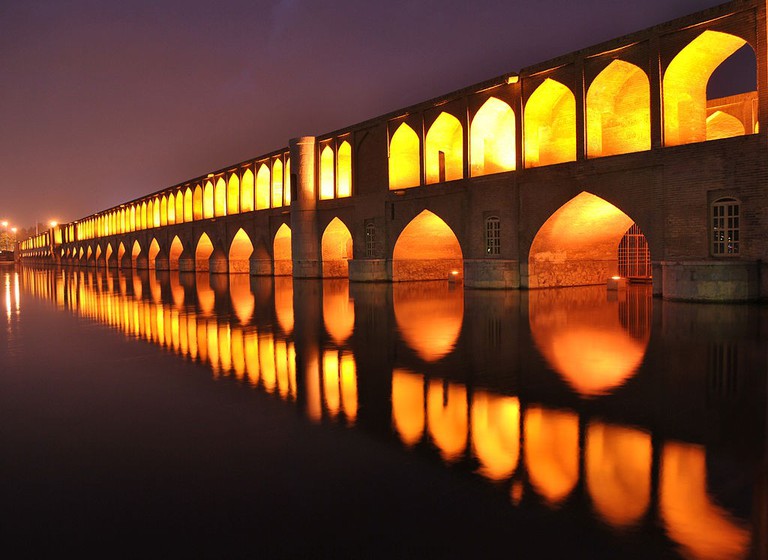 Si-o-se Pol at night, Isfahan, Iran | © Ahura21/WikiCommons
Also known as the Allāhverdi Khan Bridge, Iran’s Si-o-se Pol (which translates as ‘Bridge of 33 Arches’) dates back to 1602 and stretches across the Zayandeh Rood River in Isfahan, connecting its historical main avenue Chahar Bagh with the neighborhood of New Jolfa. Commissioned by Shah Abbas I of Persia, Si-o-se Pol is almost 300 meters long and 14 meters wide and is considered one of the world’s finest examples of Safavid dynasty era bridge design. Alongside the equally impressive, but slightly younger Pol-e Khaju built in 1650 and the ancient Pol-e Shahrestan, dating back as far as the 3rd century, Si-o-se Pol is one of 11 bridges in Isfahan.

Facebook
Email
Twitter
Pinterest
Copy link
Share
Charles Bridge, Prague’s oldest and most magnificent bridge, was built over the course of 45 years from 1357 into the early 15th century, and is today one of the Czech capital’s most visited sights. Flanked on either end by magnificent Gothic bridge towers the 516-meter bridge, which connects Prague’s Old Town with Malá Strana across the Vltava River, is adorned with 30 statues of saints carved between 1683 and 1928. Its most famous statue, that of St John of Nepomuk, is said to bring good fortune to those who touch it – ironic, perhaps, considering the saint was thrown to his death from the Charles Bridge in 1383. 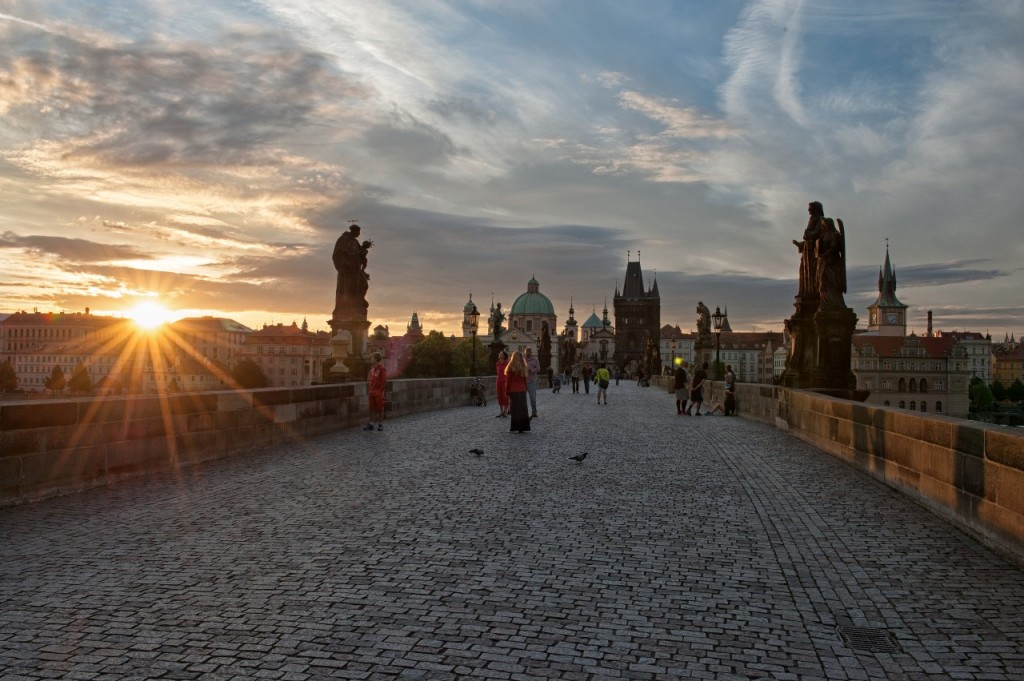 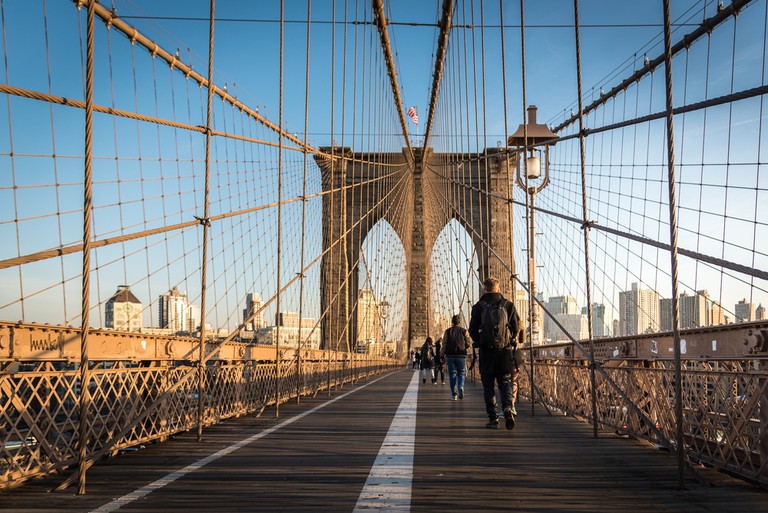 Walking through the Brooklyn Bridge | © Nata S / Shutterstock
Designed by German-American engineer John Roebling and spanning 486 meters across New York’s East River, the Brooklyn Bridge was officially opened in May 1883 and laid claim to the title of ‘world’s longest suspension bridge’ until it was pipped to the post by the nearby Williamsburg Bridge in 1903, which surpassed its length by two meters. Nevertheless, the Brooklyn Bridge is one of the most iconic architectural features of New York City’s stunning skyline and has been recognized with many accolades including becoming a designated National Historic Landmark in 1964 and a National Historic Civil Engineering Landmark in 1972. 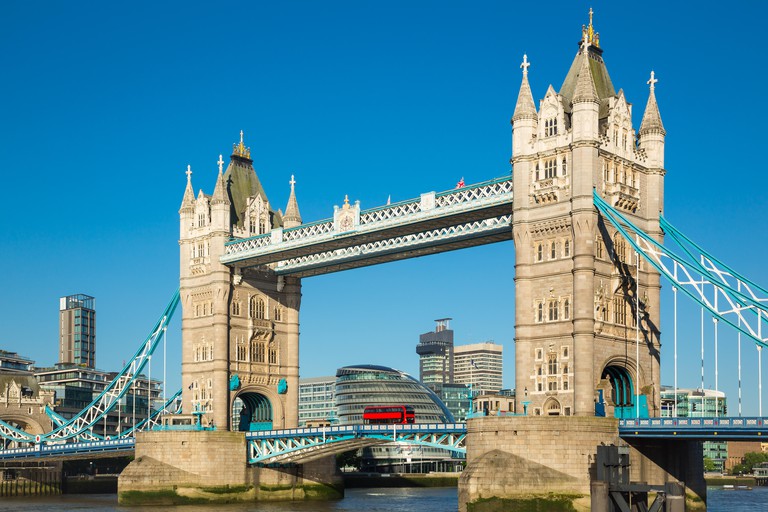 © Gang Liu / Alamy Stock Photo
Part suspension bridge and part bascule – a sophisticated type of drawbridge that gets its name from the French word for ‘see-saw’ – London’s Tower Bridge was constructed between 1886-94 as a means of cutting congestion in the city without disturbing river traffic below. Though today the bridge is one of the capital’s most quintessentially ‘London’ landmarks, it wasn’t always so loved – in fact, English artist Frank Brangwyn stated in his 1920 publication A Book of Bridges that “a more absurd structure than the Tower Bridge was never thrown across a strategic river.” 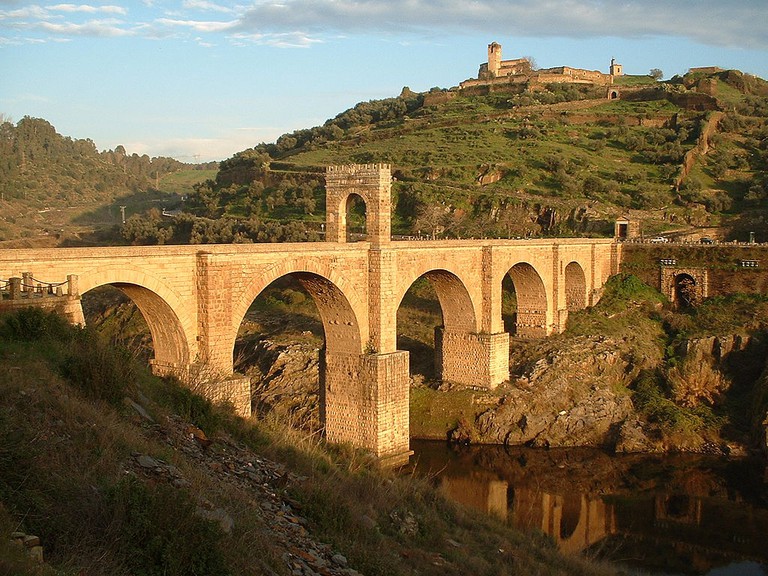 Alcántara Bridge, Cáceres | © Para/WikiCommons
Dating back as far as the 2nd century, Spain’s Alcántara Bridge is a spectacular feat of ancient Roman engineering. Constructed under the orders of Emperor Trajan, the six-arched structure crosses the Tagus River and was built to connect the then Roman settlement of Cáceres with Portugal’s historic Beira Alta province. Over its long, rich history the bridge has sustained considerable damage on a number of occasions – in 1214, Moors destroyed one of its smaller arches and again in 1760, another of it arches was razed by the Spanish to prevent Portuguese invasion – though thanks to several repair efforts, the ancient Alcántara Bridge has managed to withstand the test of time. 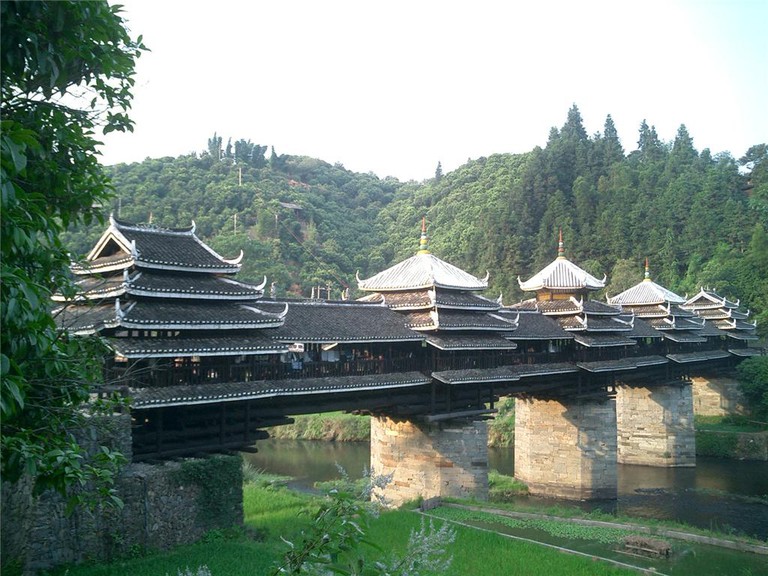 Chengyang Wind and Rain Bridge | Courtesy China Highlights
Located in northeastern Guangxi’s Sanjiang Dong Autonomous County, the Chengyang Wind and Rain Bridge – so called as it offers a scenic respite from the elements — is 100 years old and among China’s most famous bridges. Stretching over 60 meters across the Linxi River, the beautiful covered bridge sits on five stone columns each topped with wooden, pagoda-style pavilions. Interestingly, it was built without using a single nail or rivet, with all beams and planks held together by dovetail joints instead. At one end of the Chengyang Wind and Rain Bridge, visitors will find an engraved poem by Chinese writer Guo Moruo, who was enchanted by the structure after first seeing it in the mid-1960s. 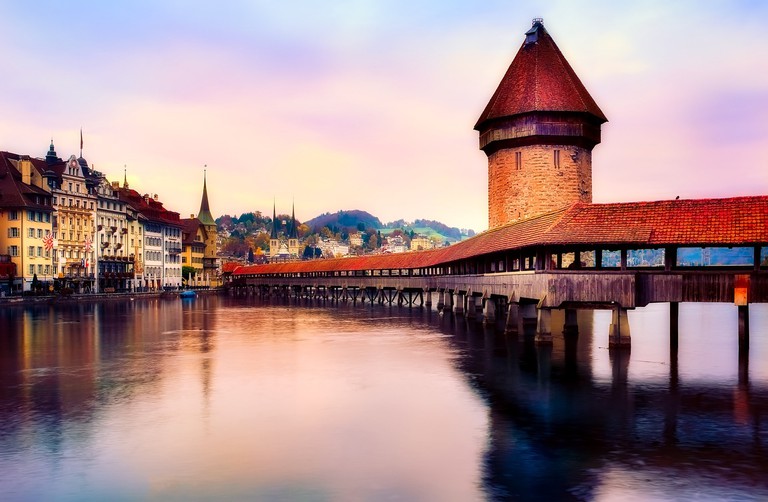 Kappelbrucke at sunset | 12019 / Pixabay
Lucerne’s early 14th century Kapellbrücke (Chapel Bridge) is not only Europe’s oldest covered wooden bridge, it’s also the oldest surviving truss bridge on the planet, too. Extending in an unusual diagonal shape over the Reuss River, the 170-meter bridge was originally constructed as part of Lucerne’s fortifications and during the 17th century, a series of paintings by artist Hans Heinrich Wägmann depicting scenes from Swiss and local history were added. Sadly, a fire broke out on the bridge in 1993 destroying the majority of Wägmann’s works, alongside damaging much of Kapellbrücke itself, though around 30 of the paintings were rescued and the bridge eventually fully restored. 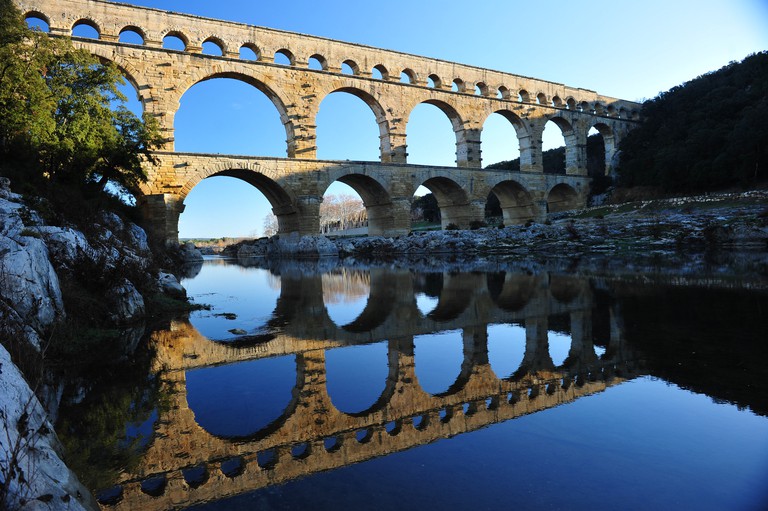 Pont du Gard | ©Tiberio Frascari/Flickr
Part of the 50-kilometer Nîmes aqueduct, France’s Pont du Gard – a three-level water bridge spanning Languedoc-Roussillon’s Gardon River built midway through the 1st century AD and comprised of 21,000 cubic meters of rock weighing over 50,000 tons – is a marvel of Roman engineering. In 1985, the stunning aqueduct was designated a UNESCO World Heritage Site, while in 2004, Pont du Gard was recognized as one of France’s most prized cultural treasures and named an official Grand Site de France. It is a source of inspiration for many artists including French painter Hubert Robert to English artists William Marlow and Frederick Richard Lee.

The late medieval Ponte Vecchio, crossing Tuscany’s Arno River, is one of Florence’s best known landmarks. Famous for the shops that have called the bridge home since its construction, Ponte Vecchio, built in 1345, was originally populated by butchers, fishmongers, tanners and the like before a decree ousted them in favor of classier goldsmiths and jewelers, which are today joined by souvenir shops and art studios. Interestingly, Ponte Vecchio was the only of Florence’s Arno River bridges spared from German bombing during World War II apparently at the personal behest of Hitler himself. 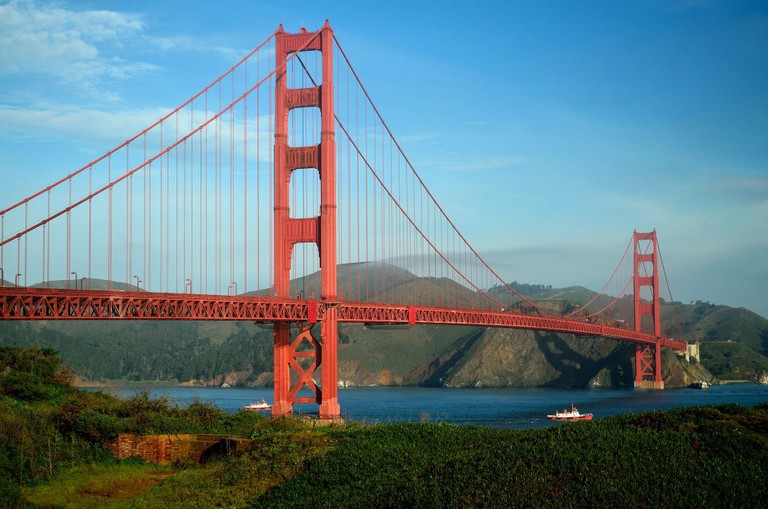 Golden Gate Bridge | © Tom Hilton / Flickr
San Francisco’s magnificent Golden Gate Bridge – designed by American civil engineer Joseph Baermann Strauss in a grand Art Deco style and officially opened in 1937 after seven years of construction – is one of the city’s, if not the entire West Coast’s, most iconic architectural feats. Its famous color, often mistaken for red but actually ‘International Orange’, was chosen for its ability to complement its existing environment and remain visible in the Bay Area’s legendary fog. The building of the Golden Gate Bridge made major contributions to construction safety with Strauss insisting on the installation of a safety net, amusingly dubbed the ‘Halfway-to-Hell Club’ by workers.
Give us feedback