The 10 Greatest Music Biopics Ever Made 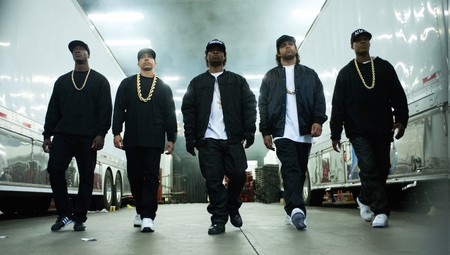 The life of the musician is invariably fascinating; the great composer Beethoven, for instance, was said to insist on drinking coffee that had been made with sixty beans exactly. Genius has its quirks and idiosyncrasies and the music biopic is the film genre that explores the back stories behind the songs. Here’s our choice of ten of the best for you to check out…

Bound for Glory was based on the 1943 autobiography of the same name by the great folk singer Woody Guthrie. David Carradine stars as Guthrie in the Oscar-winning biopic, which was the very first instance of a Steadicam being used in a movie. The film follows the singer and sign painter from his home in Oklahoma through the migration to the promised land of California during the Depression of the 30s. Along the way as he rides the boxcar and hitches a ride he meets hobos, itinerant fruit-pickers and displaced farmers all concerned about where the next square meal is coming from. The score won an Oscar, as did the cinematography.

When it was first shown at the Cannes Film Festival in 2007, Control was highly acclaimed by the critics. It tells the story of Ian Curtis and Joy Division, in the years 1973 – 1980 when the lead singer killed himself. The screenplay was based on a book by Deborah Curtis, wife of Ian and covers their marriage, his affairs, his struggle as a stage performer suffering with epilepsy, and the rise of Joy Division as a band. The music used in the film is by New Order – the group formed by the rest of Joy Division following the death of Curtis, and much of the filming was carried out on location in Macclesfield, Manchester and Nottingham.

The title characters are Sid Vicious and Nancy Spungen, and the film depicts their doomed, ruinous romance that ended with Vicious killing his girlfriend in a New York hotel in 1978. Vicious is played magnificently by Gary Oldman (even though he later dismissed his portrayal of the bassist of the Sex Pistols as “not great”). The film takes us from the start of the relationship, their descent into heroin use, and the breakup of the Pistols following their chaotic American tour. Roger Ebert, the great film critic, gave Sid and Nancy four stars out of four and Rolling Stone ranks it as the third best film inspired by rock and roll after A Hard Day’s Night and This is Spinal Tap.

Amadeus was hugely popular when it came out in 1984. It took four Golden Globes and eight Oscars including for Best Picture. It was based on the play of the same name by Peter Shaffer, who also wrote the screen adaptation, and is a fictional biography of Wolfgang Amadeus Mozart. Or more precisely it’s a biopic of Mozart told through the perspective of fellow composer Antonio Salieri and his obsession and rivalry with Mozart. Set in the Vienna of the late 18th Century, it stars F. Murray Abraham as Salieri (a performance he based on John McEnroe’s moody genius on the tennis court) and Tom Hulce as the impish Mozart. Amadeus is ranked as number 53 on the AFI’s 100 Years…100 Movies list of the best American films of all time.

Joaquin Phoenix gave a virtuoso performance in Walk the Line as Johnny Cash. The film charts the life of Cash as the son of an Arkansas sharecropper, through his military service and struggles as a young musician in Memphis, to his turbulent relations with his wives, drug abuse and the famous Folsom Prison concert in 1968. Reese Witherspoon won an Oscar for her portrayal of June Carter Cash, second wife of the singer. Phoenix did all the singing in the film himself without being dubbed and manages to pull off Cash’s distinctive gravelly burr remarkably well, the fruits of hours of voice coaching with T-Bone Burnett, the music consultant on the film.

Much like Phoenix in Walk the Line, Gary Busey did his own singing and performed the music in The Buddy Holly Story. The Crickets, Holly’s backing band, didn’t like the biopic when it originally came out, but Busey received an Oscar nomination while the score won an Academy Award. The film runs from Holly’s time as a small-town musician in Lubbock, Texas at the age of 19, through his rise to stardom, tension with the rest of the band and ultimately to the Day The Music Died – February 9, 1959, when Holly, Ritchie Valens and the Big Bopper were killed in a plane crash at Clear Lake, Iowa.

Lisztomania was directed by Ken Russell, so expect it to be ever so slightly mad! Based on the life of the composer and pianist Franz Liszt, it stars Roger Daltrey of The Who as the protaganist, the first superstar of European music in the 19th century. Lisztomania was the name given by the poet Heine to the frenzy and hysteria that accompanied Liszt’s performances in Paris and Berlin – similar to the Beatlemania of the early 60s. Russell’s film takes us through Liszt’s romances, seductions, and run-ins with the likes of Wagner, Strauss and Chopin. Ringo Starr turns up playing The Pope, and the soundtrack features Rick Wakeman doing synth versions of Liszt’s works.

Made for the HBO network in the US and given a cinema release in the UK, Behind the Candelabra is the story of the strange relationship that developed between the aging piano maestro Liberace and his lover Scott Thorson. Starring Michael Douglas and Matt Damon as the leads, the film was based on Thorson’s book Behind the Candelabra: My Life with Liberace. During the last ten years of his life, Liberace attempted to create in Thorson his double, even going so far as to fund plastic surgery to mould Thorson’s appearance to look more like him. The film took years to develop, was directed by Steven Soderbergh and took multiple Emmy Awards and Golden Globes when released.

Not just one of the best music biopics made in recent times, but one of the best films too. Roman Polanski directed this tale of survival based on the experiences of Polish-Jewish pianist Wladyslaw Szpilman in Warsaw during the Second World War. He sees his family sent to the Treblinka Concentration Camp, is condemned to perform slave labour, works for the Resistance and is helped by a German officer after he discovers his talent for playing the piano. The screenplay was developed from Szpilman’s memoirs by Ronald Harwood and won him an Oscar, one of three for the movie with Polanski and lead actor Adrien Brody also receiving Academy Awards.

Does rap music glorify violence? Or does it simply reflect the society in which it is produced? That’s one of the main questions that run through Straight Outta Compton, the film biopic detailing the rise of N.W.A, the hip-hop group made up of Dr Dre, Ice Cube, Eazy-E and others. It runs from their humble beginnings in the mid-80s to their huge successes ten years later – with police harassment, LA gang culture, record producers looking to rip off the young rappers, and the LA Riots all conspiring to stand in the way of the rise of the band. The film is named after their breakthrough single and debut album of the same name.