Why Thanksgiving Is An American Celebration Of Immigration 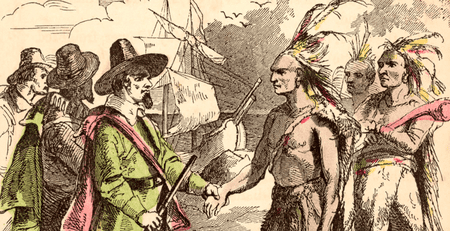 Memoirs from Pilgrims William Bradford and Edward Winslow depict the Wampanoag tribe’s welcome of foreign settlers — which paved the way for the first Thanksgiving — and remind us that immigration is central to the celebration.

A long time ago, refugees fleeing their home country’s hostile political environment headed west over the Atlantic ocean in search of a better life. They arrived on a rock, unprepared for the challenges that come with moving to a new land: a shortage of food and inadequate shelter. A group of Americans took pity on these refugees, sharing their soil and helping them gain a foothold on it. In an act of goodwill and diplomacy the immigrants hosted the Americans for a large shared feast. The Americans were called the Wampanoag; the immigrants the Pilgrims. Their meal has since become celebrated in the most quintessential American tradition, Thanksgiving. 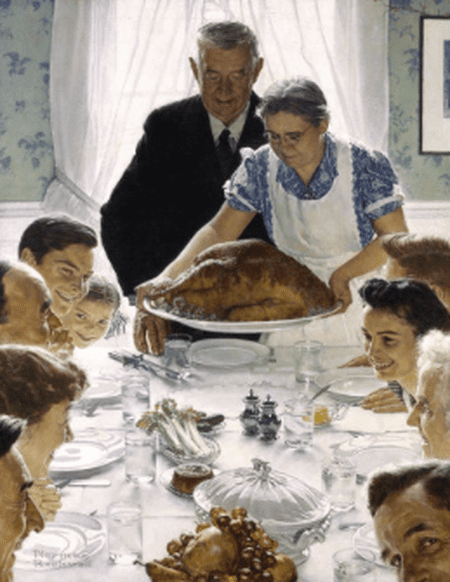 Freedom From Want by Norman Rockwell

The 400 year anniversary of the first Thanksgiving will occur in 2021. Its meaning since then has shifted from a meal of gratitude toward a hospitable people to, just a couple of years later, a meal of gratitude towards good harvest — minus the original guests of honor. The Thanksgiving most familiar to us now has come to resemble the Norman Rockwell painting ‘Freedom From Want’: a wholesome family affair consisting of a Turkey dinner cooked by the wife, with the male head of household in charge of cutting the bird. That representation has since become anachronistic. As indicated by a New York Times video feature on cultural variations of Thanksgiving dinner, our country has become too diverse for a Rockwell painting to handle.

Anyone who would argue that America is losing its sense of tradition to diversity would do well to remember the origins of the holiday, the fact that it was a meal where one group of people welcomed another as friends and neighbors, that its celebration lasted three days, and that turkey wouldn’t become the main course for another 230 years. It’s a celebration that has and will continue to evolve.

What we know from that event comes from two Pilgrim journals: William Bradford’s Of Plymouth Plantation and Edward Winslow’s more memoiristic Mourt’s Relation. Both Bradford and Winslow served as governors of Plymouth Colony and their meticulous journal-keeping allows us to have an understanding of how dire the Pilgrim’s situation was during their first winter in the New World, one that saw the colony ravaged by cold, hunger, disease, and malediction. Bradford writes:

[A man] made over to one of his mates all he had, when he should die, if he would but help him in his weakness. So his companion got a little spice and prepared some food once or twice, and when the man did not die as soon as he expected, his companion went among his comrades and swore the rogue would cheat him out of his inheritance; he would see him choke before he prepared him any more food; and so the poor fellow died before morning!

By spring the colony had lost half of its population, and were it not for the humanitarian intervention of the Wampanoag the other half likely wouldn’t have survived much longer. Bradford notes how the settlement was at first observed by the Wampanoag, who “would sometimes show themselves aloof, at a distance.” It was only in March of 1621 that an Abekani Indian Samoset extended communication. As Winslow notes:

He very boldly came all alone and along the houses straight to the rendezvous, where we intercepted him, not suffering him to go in, as undoubtedly he would, out of his boldness. He saluted us in English, and bade us welcome, for he had learned some broken English among the Englishmen that came to fish at Monchiggon, and knew by name most of the captains, commanders, and masters that usually come. He was a man free in speech, so far as he could express his mind, and of a seemly carriage. We questioned him of many things; he was the first savage we could meet withal. 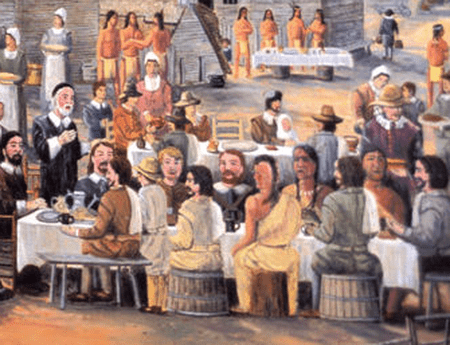 Samoset was like the Secretary of State of the Wampanoag Nation, sent by his Commander-in-Chief Massasoyt to establish diplomatic relations with the settlers. Samoset spoke of another native, Squanto, the last member of the Patuxet tribe (primarily wiped out by a plague) who had been held in Europe as a slave for almost fifteen years before successfully pleading for his freedom. Squanto spoke English with great fluency. As Massasoyt’s ambassador, he moved into the settlement, taught the Pilgrims to live off the land, and forged a bond between the two people. When the harvest of 1621 was successful, the pilgrims celebrated with a feast and invited the Wampanoag as their guests to show their gratitude. Winslow writes:

Our harvest being gotten in, our governor sent four men on fowling, that so we might after a special manner rejoice together after we had gathered the fruits of our labor. They four in one day killed as much fowl as, with a little help beside, served the company almost a week. At which time, amongst other recreations, we exercised our arms, many of the Indians coming amongst us, and among the rest their greatest king Massasoit, with some ninety men, whom for three days we entertained and feasted, and they went out and killed five deer, which we brought to the plantation and bestowed on our governor, and upon the captain and others. And although it be not always so plentiful as it was at this time with us, yet by the goodness of God, we are so far from want that we often wish you partakers of our plenty.

This gesture may be the first great act of American diplomacy, one that embodies what should be a foundational value — that people from vastly different backgrounds can co-exist harmoniously. Yet its was a fleeting peace: colonial aggression against the tribes, the arrival of slave owners, and the expansion of the colonies under the British crown made certain that within a year of the first Thanksgiving, a second one of its kind was near-impossible. Our modern, cozy version of Thanksgiving seems to have forgone its historical gravitas for the mythology of a children’s tale. Consider the way in which the pilgrims were immortalized in nationalistic songs such “My Country Tis of Thee”:

Land where our fathers died,
Land of the pilgrim’s pride.

It’s a line pulled from the same bag as the Andrew Jackson twenty-dollar bill or the rightly-contested Columbus Day. In other words, it exemplifies the American tendency to forget the people who were not only indigenous to this land, but who welcomed new arrivals and shared their ‘home.’

Even the Mayflower Society, an institution made up of the descendants of Pilgrims and headquartered in a stately house in Plymouth, Massachusetts, pulls up nothing when one searches for ‘Wampanoag’ on their website. The Wampanoag tribe still exists, having become a federally recognized nation residing on a tiny bit of reservation land at the southern tip of Martha’s Vineyard. Have these two groups of people shared another feast in the past 400 years?

At a time when millions of immigrants face deportation, when the amnesty of refugees are under threat, and native tribes continue to fight to protect their land from corporate interests; in other words, at a time when goodwill toward any fellow human threatens to collapse as did the alliance between the Wampanoag and the Pilgrims, we need the reminder that four hundred years ago, this kind of amity was once, and should continue to be, valued. Its endangerment holds no benefit for the future of our nation.