Janelle Monáe and Wondaland Records’ newest protest piece, ‘Hell You Talmbout,’ is the latest in a long line of pop songs denouncing the injustices suffered by the USA’s African-American community. In light of Monáe’s recent release, we take a look at arguably the greatest protest song ever made, Billie Holiday’s legendary ‘Strange Fruit,’ along with its notable Nina Simone cover. 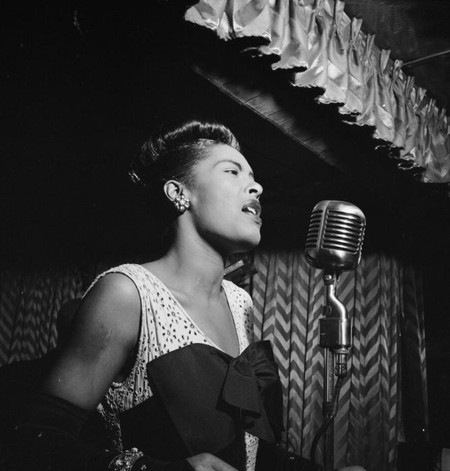 A far cry from the sheer brutality of Monáe’s latest record (which is itself significantly different from the original ‘Hell You Talmbout’… a shame, by all standards) ‘Strange Fruit’ is all nuance and melody, a combination that yields one of the most dramatic and haunting songs ever made. It was adapted from an anti-lynching poem by Abel Meeropol, published in 1937, and inspired – most specifically – by a photo of the atrocities committed to Thomas Shipp and Abram Smith in 1930 in Marion, Indiana. A direct attack on the utter banality of Southern racism, ‘Strange Fruit’ juxtaposes the savagery of hanging bodies with the American South’s usual ‘gallantry’, or pleasant image. The contrast is most apparent in the second stanza, where Dixie’s natural beauty and elegant atmosphere are ambushed by a cadaver — a scene which perfectly embodies this tainted society:

Billie Holiday was introduced to the song by Meeropol himself in 1939, and took to performing it during her residency at Cafe Society in New York’s Greenwich Village. A routine evolved where she would close her set with ‘Strange Fruit’, while all the lights were turned off save for a lone spot shining on her face. Though these performances were a success, record label Columbia and producer John Hammond refused to record the song, fearing controversy.

This was, after all, Jim Crow-era America, a time when racism was open — if not generally accepted — and institutionalized in the South. She nonetheless managed to work with her friend Milt Gabler at Vocalion Records, recording the song on April 20th and releasing it three months later. It came to sell more than one million copies, becoming one of Billie Holiday’s most enduring hits, as well as a standard for the whole nascent generation of civil rights activists.

The formula—simple, yet effective, melody; pure, ultra-expressive voice; biting, violent lyrics—was taken up a quarter of a century later, at the height of the Civil Rights movement, by none other than Nina Simone. Cementing her reputation as the greatest cover artist in history — or at least so to this writer (for evidence, try here and here)—Simone cut the accompanying music further, allowing the listener to focus almost solely on her distressing voice, formidable lyrics, and newly ethereal piano. The result is a song about as tragic as its subject matter, with an emotional depth nearly unrivaled within any other form of popular music.

The intended political and moral scope of a work like this gives it more power, of course. At least as long as the social landscape keeps the message relevant, as is the case for ‘Strange Fruit’ and ‘Hell You Talmbout’. Nonetheless, the former’s superior aesthetics keep it, in many ways, timeless, a true emotional response to its cause rather than just a political statement… and this is precisely where Monáe’s latest offering cannot compare, no matter how pressing its declaration; ‘Strange Fruit’ is simply too perfect a work of art.