‘Straight Outta Compton’ at 30: An Illustrated History of NWA 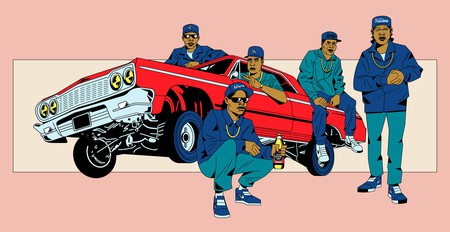 Once self-dubbed “the world’s most dangerous group,” NWA pioneered the genre of gangsta rap and singlehandedly changed the trajectory of hip-hop music.

Eazy-E, Dr Dre, Ice Cube, MC Ren and DJ Yella exploded on to the scene in 1986 with what was originally known as “reality rap.” The group came from Compton, California – an ungentrified urban community blighted by the war on drugs, class poverty and racially charged police brutality.

As young black men were repeated targets of street-wide shakedowns and hold-ups, this group of young advocates pulled inspiration from their environment and gave a voice to young black men having parallel experiences all over the USA. Their debut studio album, Straight Outta Compton (1988), galvanized a disenfranchised community in that respect.

NWA combined passionate lyrics – delivered with dark humor – that pointed directly toward a nationwide epidemic. Their notorious single “Fuck tha Police” was an outright protest against brutality and racial profiling in urban communities like Compton. Performed by Dr Dre, Eazy-E and Ice Cube, the song garnered international recognition for unifying young people against racism, but was also met with censorship and FBI threats against NWA.

The band was criticized, mostly by legal authority figures, for their lyrical depictions of drug taking, gun use, sexuality and racial violence against black men. But, the group stood in solidarity behind their music, insisting that they refused to sugarcoat their reality and experiences. Occasionally, subject matter and real life converged: the band were arrested after playing the song live at a 1989 concert in Detroit, with a riot ensuing outside the venue.

“It was all kinds of forces against us – it didn’t crack us, break us, turn us into punks. It didn’t make us bite our tongue. It just made us stand up even more. And that’s powerful,” Ice Cube said in a 2015 interview with Billboard.

After Ice Cube left the group in 1989 to launch a solo career, NWA remained as popular as ever and released their second studio album, Niggaz4Life, in 1991. However, the band was beset by clashing egos and soon fell apart when Dr Dre moved to Death Row Records in 1992. The band’s struggles were depicted in the 2015 film adaptation with the same name as the album, Straight Outta Compton.

The film, which garnered enormous success during the time of further protests against police brutality in the Los Angeles area, also depicted the tragic demise of frontman Eazy-E, who died of AIDS in 1995. It also prophesied the successes of more modern successful rap acts like Eminem, Snoop Dogg, The Game, Nate Dogg and Tupac, who were all heavily influenced by the original collective of NWA.

In 2000, after years of solo careers and independent production projects, Dr Dre and Snoop Dogg’s co-headlined tour, Up in Smoke, reunited many members of NWA and Death Row artists. The pair started recording in a mobile studio with Ice Cube, MC Ren and Eminem, but plans for a comeback album were shelved.

Following the success of the film, the remaining members of NWA reunited a year later to play Coachella Festival, just days after they were inducted into the Rock & Roll Hall of Fame.

Today, the cultural impact of NWA lives on through their work, and it appears that the group’s impact is everlasting. Now, their story is told by the emerging artists of the same genre, from 50 Cent to Kendrick Lamar.

“These are the records that made LA known all across the world. It was dubbed gangsta rap, but what it was for me was an intimate look at what was actually happening in our community in Los Angeles, and in Compton in particular,” Lamar said in his speech inducting NWA into the Hall of Fame. “The fact that a famous group can look just like one of us and dress like one of us, talk like one of us, proved to every single kid in the ghetto that you can be successful and still have importance while doing it.”