Squash Advice From Top Pros Around the World 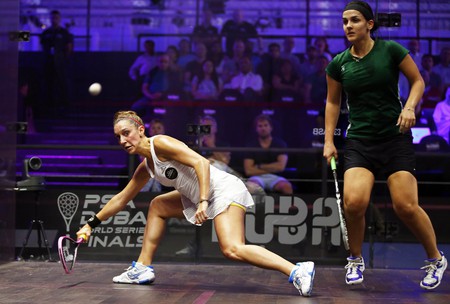 Camille Serme (left) is the No. 3 women's squash player in the world | © Ali Haider/Epa/REX/Shutterstock

Squash can trace its roots as far back as 1830s England. Boys at the Harrow School, located outside London, played the game using sawed-off racquets and a rubber ball in alleys and courtyards. The school opened three courts for rugby fives, also known as handball, in 1865, and the squash players took to these facilities to play their new game.

The sport crossed the Atlantic Ocean in 1884 when James Conover, a teacher at St. Paul’s School in Concord, New Hampshire, built the first squash courts outside of England. Squash began gaining popularity around the world with courts debuting in Ireland, Canada, South Africa, and New Zealand over the next 20 years.

Today, more than 20 million squash players play the game regularly across 185 countries. While the sport is traditionally played in affluent communities, urban squash programs are making the game more accessible to players regardless of socioeconomic status. According to a study by Forbes, squash is the No. 1 sport for getting and staying fit, with participants burning approximately 750 calories per hour on average.

Here’s what some of the world’s top squash players said about the sport while in New York City for the 21st Tournament of Champions in January 2018. Bottom line, it’s a great workout and picking up a racquet is highly encouraged.

“I would encourage everybody to get into squash because it ticks all the boxes. There are no age restrictions and it can be played by anyone. I think it’s a great hobby to pick for anyone at any age.”

“What I like the most about squash is that it’s very physical, but at the same time it’s a game. It’s not just running outside; you’re playing with a ball and your opponent. It’s fun. At the same time you can lose weight because you’re running a lot. It’s very complete. You work a lot of different muscles.”

“It’s a phenomenal game. Especially when you’re new to it, there’s so much going on and you’ll get better with time, but the more you learn and things take on different shapes it becomes so much fun. If you aren’t learning, it will drive you insane. You have to be in ‘grow mode’ all the time. Just learn, keep learning, and enjoy learning. Learning new things and learning to think differently is so much fun. To an untrained eye it looks like this beautiful chaos and it really is, but there are so many little things going into it that you can learn about. I’m still learning. I’ve been playing for 20 years and I’m still a novice.”

“Just try it. Anyone who tries it will like it and find it interesting. If someone wants to become a professional, just enjoy that process.”