Spectacular Places to Cycle in the United States 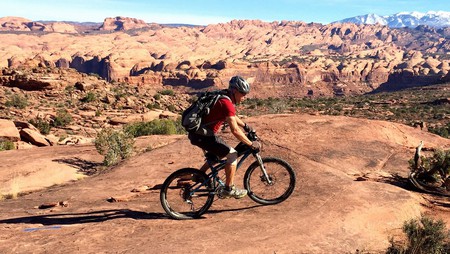 Cycling is a great form of exercise, and it’s a sport that allows you to enjoy amazing views of incredible places. These are the most spectacular trails for riding in the United States.

Located near Boulder, Colorado is the near eight-mile Walker Ranch Loop. Considered a difficult ride, the trail can be taken either clockwise or counter clockwise. With steep climbs and a downhill ride that leads you right back up, this loop is best when used between the months of March and November.

Originally created for motorcycles, the Porcupine Rim Trail in Moab, Utah is for advanced cyclists, as it requires expert technical skills. The trail, which is over 14-miles long, can be ridden one way with a shuttle, or as a more than 30-mile loop roundtrip for the most advanced bikers. From the rim, cyclists will head downhill alongside rocky ledges and deadly cliffs. There is an 11-mile descent to the Colorado River which consists of single and double-track rock, as well as slickrock. 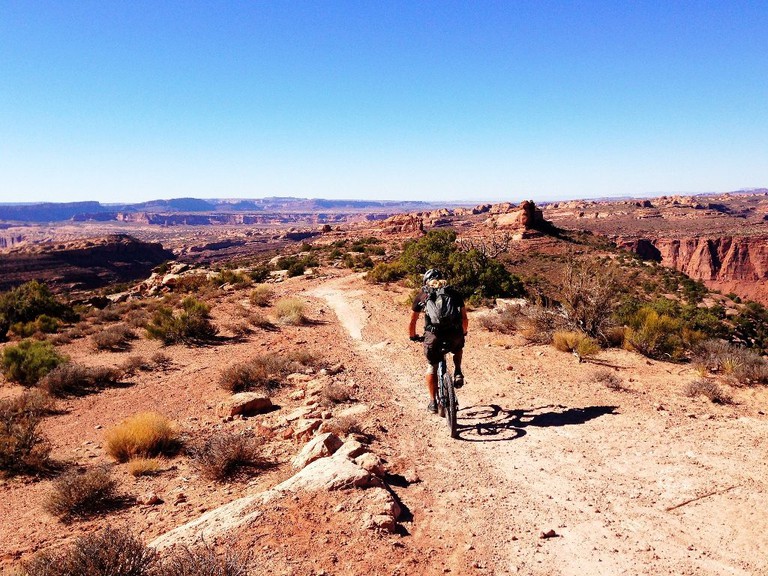 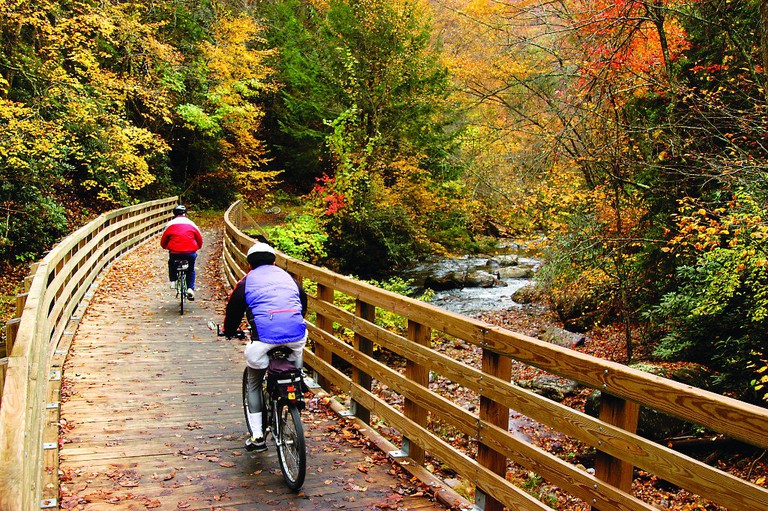 Bikers ride Virginia Creeper Trail / (c) US Forest Service / Flickr
At nearly 35-miles long, the Virginia Creeper Trail in Virginia runs from Abingdon to Whitetop, near the North Carolina state line. It is a multi-purpose rail trail that lies half on federal land managed by the US Forest Service, and half on property owned by local governments. Because of this, there are private gates along the trail that require opening along the way. The trail is mostly downhill and takes bikers through scenic farmlands, creeks and forests, as well as Christmas tree farms and rushing streams. At one point, riders will reach Whitetop Laurel Creek, which is one of Virginia’s largest wild trout streams.
Open In Google Maps
Virginia Creeper National Recreation Trail, Damascus, Virginia, USA
Give us feedback

Train Station
Facebook
Email
Twitter
Pinterest
Copy link
Share
Map View
Since 1999, the Lance Armstrong Bikeway has been the premier bike trail for cyclists in Austin, Texas. The concrete route is about five-miles long and takes riders along Lady Bird Lake as the shaded trail passes lakeside parks and under I-35 on a path to downtown Austin. East from the freeway, the bikeway connects to the Plaza Saltillo train station, which makes for a nice connection stop on a long commute.
Open In Google Maps
Lance Armstrong Bikeway, Austin, Texas, USA
Give us feedback

The only underground bike park in the world, Kentucky’s Louisville Mega Cavern Bike Park offers a one-of-a kind biking experience. The 320,000 square-foot cave has 12-miles of underground trails and holds a steady 60 degree temperature all year. The trails include jump lines, BMX, cross country and pump tracks, all in a former limestone cavern underground.

With family-friendly features that even beginner cyclists can enjoy, 42-acre Valmont Bike Park in Boulder, Colorado has much to offer. There are four miles of natural surface cross country trails that have practice features, two different pump tracks, a dirt jump area, a dual slalom race course and a slopestyle area. There is even a “tot track” for younger cyclists, as well as a playground and picnic tables.

In Stowe, Vermont is Cady Hill Forest, which offers 11 miles of multi-use trails that can be used for hiking, biking, running or hunting. The trails offer a variety of options, with steep, rocky, flowy and smooth sections for riders of all skill levels. In 2014, new trails were built – Flo and Snake. The latter is full of twists and turns, which leads to the mile-long Flo that takes people down a smooth and fast ride. This trail was built specifically for mountain biking and drops 300 vertical feet from top to bottom.

Primarily used for mountain biking, Flume Trail is a 12.9-mile moderate trail located near Lake Tahoe in Nevada. The first section of the trail is very short and technical, so many riders actually walk it. Once the single track opens up, bikers get a lovely view of Lake Tahoe. The trail twists along the steep mountainside and has one short rock slide area that riders must walk over. The single track is best when used from June through October. 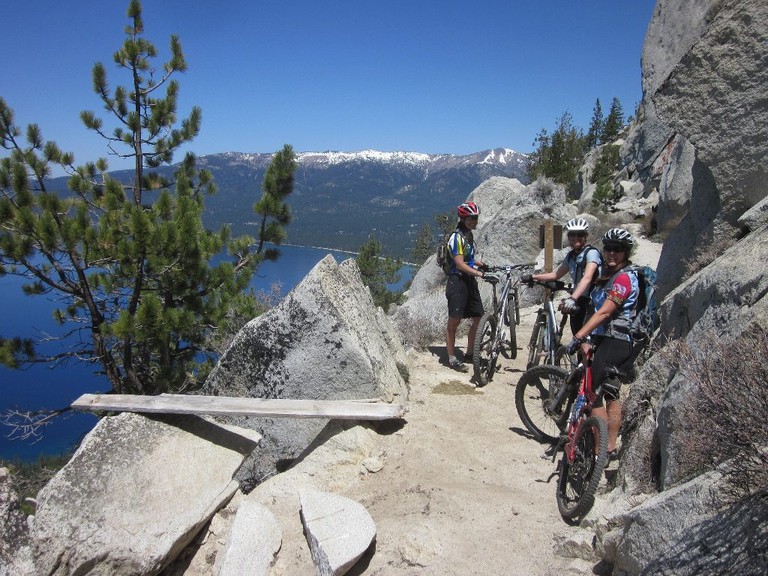 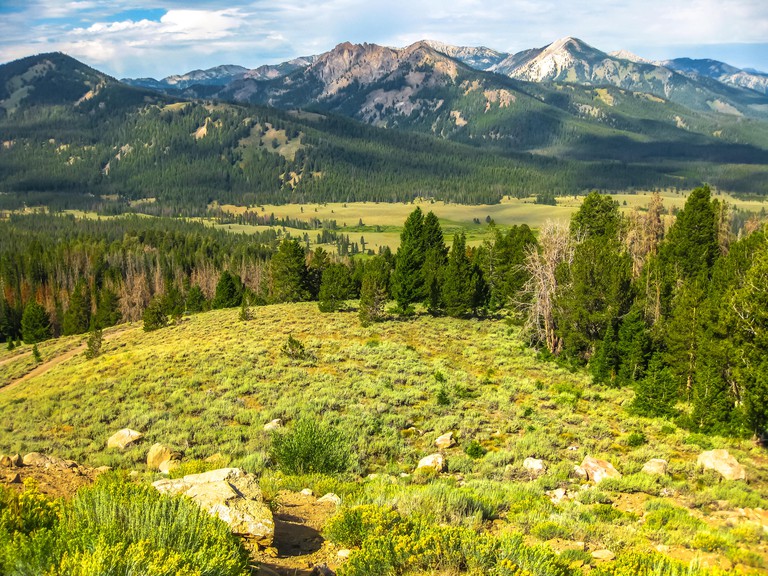 © Benny Marty / Alamy Stock Photo
Named for Gloria Moore Osberg, who wrote one of the first hiking guides for the Sun Valley, Idaho area, Osberg Ridgeline Trail in Sun Valley is an 11.75-mile trek that follows a 9,000-foot high ridgeline. With gentle dips and a smooth dirt trail, the path offers beautiful views of the Smoky Mountains, Boulder Mountains and Sawtooth Mountains. In 2013, the Beaver Creek Fire destroyed the trail, and the Ketchum Ranger District spent $160,000 to rebuild and reopen it.
Open In Google Maps
Idaho 75, Stanley, Idaho, 83278, USA
+12087373200
Visit Website
Give us feedback

Beginning downtown at Drake Park in Bend, Oregon is the Twin Bridges Loop. The path features 36-miles of stunning views of rolling forests, snow capped mountains and rim rock canyons. It passes through the town of Tumalo, which is a nice spot for taking a break as you soak your feet in the river. The trail doesn’t have any steep climbs, and is at an intermediate level. It takes about two to three hours to complete the trail, which also passes by llama farms and horse pastures.