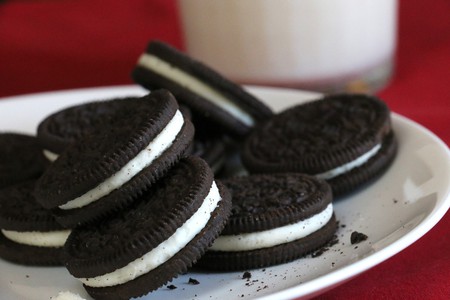 If you’ve ever wondered exactly how long to dunk an Oreo cookie in milk, there’s now a very precise answer, thanks to a group of researchers with a snack habit.

If you’re American, or have ever set foot in the U.S., you’re no doubt familiar with Oreos. Originally created more than a century ago, they’ve become America’s best-selling cookie. The traditional way to eat the sandwich cookies is by briefly dunking them into a glass of milk before popping them into your mouth, as the brand reminded us via an ad campaign earlier this year.

But what’s the optimal length of time to dunk them? That question, a perennial matter of debate, remained unanswered until recently. To settle things once and for all, a group of researchers, apparently with a big sweet tooth and a lot of time on their hands, spent two weeks studying the science of obtaining the optimal saturation level: when the cookies are fully permeated with milk but haven’t yet started disintegrating in the liquid.

Researchers from Utah State University’s Splash Lab, which studies liquids, got inspired to perform the study while eating cookies and milk, reports ksl.com, a Salt Lake City news site. “That question kept coming up, like, ‘What is the best dunking time?’ And everybody kind of argued about it,” researcher Dr. Tadd Truscott told the site.

The team conducted experiments using a variety of cookies: Oreos, Nutter Butters, Chips Ahoy, and graham crackers. But really, who dunks anything other than Oreos? The researchers found that after one second, the Oreos had absorbed 50% of the possible milk. After two seconds, they were nearly thoroughly saturated, and after four seconds, the cookies had absorbed their maximum possible amount of milk, and there was no benefit to keeping them submerged any longer. If you do, “the sugars are starting to break down as well as proteins and the more complicated structure within,” explains Truscott. Basically, your Oreo will begin dissolving in the milk.

But it’s a bit more complicated than that, reports Mental Floss. This study was performed using 2 percent milk, but an earlier study showed that absorption rates will change with varying milkfat levels—which is to say, the optimal dunking time will vary if you dunk in skim or whole milk. To oversimplify the science: A higher fat content means that milk will permeate the cookies at a slower rate. Adjust your dunking times accordingly.