Rod Smart Recalls 'He Hate Me' Nickname, Time in XFL 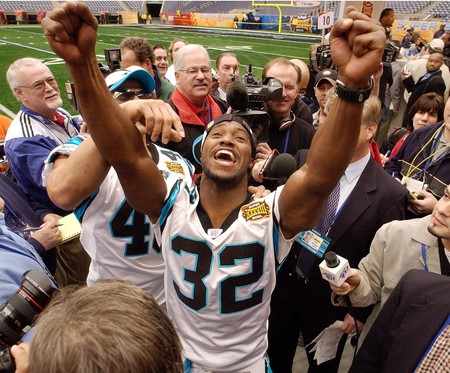 Rod Smart used his time in the XFL to make it to the NFL. Shown above at Super Bowl XXXVIII media day | © J. PHILLIP/AP/REX/Shutterstock

Rod Smart was a dual-sport athlete at Western Kentucky University. The running back and track star had his sights set on the National Football League. Smart signed with the San Diego Chargers as an undrafted rookie free agent in 2000.

Unfortunately, Smart was released prior to the start of training camp. He didn’t get to have the total NFL experience — training camp, preseason, regular season (and hopefully, playoffs). He just had a taste of it. It was a tease. It was like dipping a toe into the pool then being told you can’t swim.

Smart then traveled north to Canada for another playing opportunity, but was cut by the Edmonton Eskimos of the Canadian Football League. It appeared as if his professional playing career might be over before it even got started. Then Smart and his agent Steve Forest came across another opportunity — the XFL.

Little did he know his tenure in the short-lived XFL — an eight-team American football league founded by World Wrestling Federation (now WWE) owner Vince McMahon — would help skyrocket Smart into notoriety and, ultimately, the NFL.

“I loved it; I loved the league and the opportunity it gave all of the players to get to the next level,” he said. “There were opportunities to show your skill set and put your name back out there. It was football. Even though there were a few rule changes it was still football. That’s what I wanted to play and was interested in playing. It was great for me.”

While Smart was second in the league with 555 rushing yards for the Las Vegas Outlaws, it was his attitude and more specifically, his nickname, that helped launch his career and still has people today referring to him as Mr. XFL. 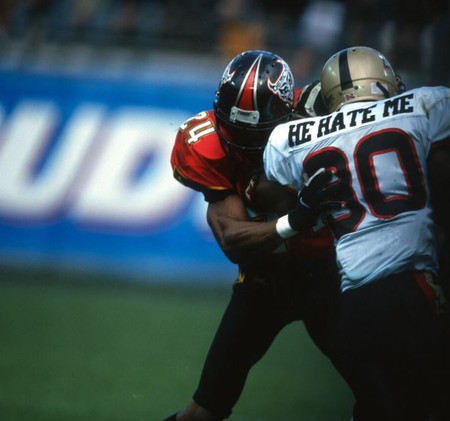 Prior to the league’s lone season in 2001, players were allowed to utilize nicknames on the back of their jerseys instead of their last name. There was “Big Daddy”, “Chuckwagon”, “Hit Squad” and countless others, but one stands head and shoulders above the rest: “He Hate Me”.

“In practice if I made a move on a defender or scored a touchdown I’d point at the guy and say, ‘He hate me,’ and throw it out there,” Smart said. “When it was time to put a nickname on our jersey, it was a no-brainer on what I’d put on the back of mine. I had to create the moniker then create something else — I had to beat my opponent and he was going to hate me when I beat him.”

Though, Smart said, “He Hate Me” almost didn’t happen.

“At first they (XFL) saw the word ‘hate’ and thought it was too negative, so I had to explain myself,” Smart said. “I had to talk to Vince McMahon and he was like, ‘I like it, let’s do it.’ He approved it and the rest is history.”

The sports entertainment element of the XFL wasn’t lost on players like Smart. In fact, he embraced it. Like a WWE superstar cutting a promo ahead of a big match, Smart did just that to highlight his persona as “He Hate Me”.

“I’m a character myself so it was second nature for me to entertain the fans,” he said. “They wanted to shoot a promo with me, so we made it happen and went with it. When the camera’s on, I’m going to give you entertainment, that’s what I do. I capitalized off that opportunity to the fullest if you look at the outcome following my extent in the XFL.”

Smart’s “He Hate Me” jersey is the highest-selling jersey in XFL history. The moniker, coupled with his play on the field, helped jumpstart his NFL career. Smart played for the Philadelphia Eagles in 2001. He was signed off waivers the following season by the Carolina Panthers. Mostly utilized as a kick returner and on special teams, Smart played with the Panthers from 2002-05, including in Super Bowl XXXVIII — a 32-29 loss to Tom Brady and the New England Patriots.

Smart recalls his XFL days in the upcoming ESPN Films 30 For 30: This Was The XFL, airing Feb. 2. He also made an appearance at the one-day XFL Hall of Fame exhibit in New York City on Jan. 14. Smart said he’s happy to hear people talking about the XFL again after all these years. 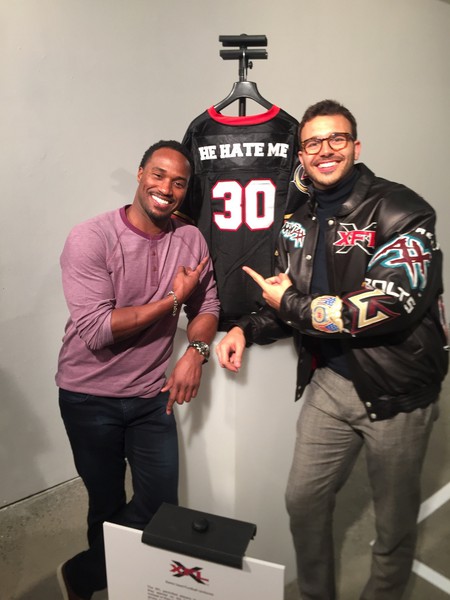 “Everything was a positive experience,” said Smart, who is a youth motivational speaker. “I’m a positive person overall anyway and put things in a positive perspective. I’ve always been a humble person so I never had the mindset of ‘I should be in the NFL.’ It was always, ‘I’m going to work my butt off to get in the NFL and show them I belong.’”